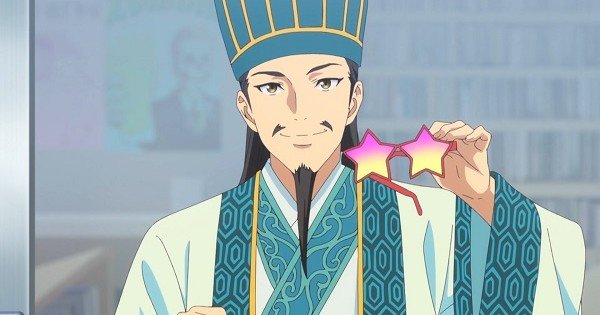 The first episode of Ya Boy Kongming! does an effective (and delightful) job of laying out its
establishing premise: Three Kingdoms-era strategist Kongming finds himself reincarnated into
modern-day Japan, where he winds up tending both a bar and the career of aspiring songstress
Eiko. It’s fun, it’s funny, and perhaps surprisingly cute in its wholesome handling of the whole
affair and making clear just how moe ol’ Zhuge Liang can be. Past the central time-travel
gimmick, that first episode also clearly demonstrates just how instrumental the
musical element of the story will be moving forward, featuring several performances from Eiko
(including a lovingly-rendered and particularly moving one in her apartment halfway through the
episode) and even sprinkling in some base knowledge of musical technicalities that it can
work off going forward. It’s just getting started, but it’s still a good time.

But it’s the second (and by extension, third) episode of this anime that better showcases the actual structure of the show and its further
charms. Kongming formally takes on the role of Eiko’s manager and we’ll be following her
path to stardom step by step, with each part punctuated by the strategist demonstrating his
latest Zany Scheme™ in getting her there, potentially rooted in some famous or mythologized
bit from Kongming’s history. And that, I must tell you, is where I really fell in love with this
show. Just seeing Kongming help Eiko out would be pleasant enough, since they’re both so
appealing and easy to root for, but couching those efforts in demonstrations of strategy and
mind games gives things a narrative thrust as well. It’s the sort of thing that makes any
story based on competition (combat-based or otherwise) interesting, especially when structured on
an episodic basis like this. It keeps us engaged as our own mental gears turn, theorizing about
what it is that Kongming has actually done this time as we roll up to the revelation.

It definitely helps that a lot of the elements driving that are seeded by the writing
even for those not particularly well-versed in Three Kingdoms history, which as the bar’s owner
laments, is a distressing amount of people these days. In fact, Kongming’s discussions with the
owner as they nerd out over those historical elements are there to serve that narrative purpose:
It’s in these conversations that Kongming’s famous strategy of illusion and confusion is
referenced before he deploys a variant of it in the second episode, and how he brings up his
adherence to “The Thirty-Six Stratagems” in the third episode, as well as leading into more
personal elements of his past. Like so much of this show, it’s not just an entertaining
characteristic element; it’s also just dang effective storytelling overall.

This reliance on such a structured setup does bring up the potential issue that Ya Boy
Kongming might wind up too bound by its own formula as it goes on. The third episode even
has the characters call attention to the fact that the obstacle Eiko has to deal with – competing for
an audience at the same time as a more well-known musical act – is effectively the same as that
from the second episode. One wouldn’t want a show like this, which thrives on keeping the
audience engaged with increasing stakes and galaxy-brain managerial ploys from Kongming, to
fall into such structural staleness. While that’s a concern more for the future of the show, the
way the setup works also rubs up against a potential thematic concern: The show’s
framing of competition and adversity. This angle does also make sense; Kongming is a military
strategist, so his style specifically thrives off of outmaneuvering somebody else to the advantage of himself and his liege. But some aside comments by the rival band Jet Jacket in
the third episode make the point of how other musicians in this structure are working for their big
break as much as Eiko is, thus her ‘victory’ might need to come at the cost of someone else’s.
As cutthroat as the music industry is known to be, there’s the possibility that said structure might feel too
harshly adversarial for what is, at its heart, an earnest comedy.

Thankfully, the third episode does end up mitigating that tone in a heartening way by its end,
with Kongming extending an olive branch to Jet Jacket in assisting with some of their troubles
he previously leveraged to Eiko’s success. It brings back the all-around good vibes of the series premiere, and
also offers another follow-up on some of that conversational information we got on Kongming:
The desire to appreciate the humanity of others and enjoy time spent with them as
compensation for missing out on partying with the soldiers in his previous life. That ends up
being the strongest new component from that episode; despite being a
public-domain historical transplant who serves as this show’s fundamental gimmick, we will be
seeing some characterization and development for Kongming himself.

It forms a neat parallel with the show’s overall structure that strengthens the cohesiveness of the whole thing. Just as Kongming’s past strategizing exploits inform his efforts in the modern day, his personal experiences and regrets from his past life inform how he chooses to interact with people now. Kongming was already adorably effective just basically acting as this show’s mascot, so confirming that he’ll be receiving some of that all-important humanity only makes him more appealing.

Any other concerns for how this show might trend forward are firmly questions for the future. I’m
not even entirely opposed to the idea of some adversarial elements. Mia, the rival musician
introduced in the second episode, has her propensity for Dick Datastardly-style antics which I
pretty well enjoy. Plus, come on, this is a show where the opening
features everyone dancing around to “Chikichiki Banban” (in what’s got to be a contender for
opener of the year) – things are probably going to work out generally nicely overall. For now,
these are opening episodes that immediately make the conceptual hooks clear for Ya Boy
Kongming, a series that can seem like an oddly askew gimmick at first pass, but which I’ve
kind of utterly fallen for by this point in its efforts of establishing itself.

Ya Boy Kongming! is currently streaming on
HIDIVE.

Chris is a freelance writer who appreciates anime, action figures, and additional ancillary artistry. He can be found staying up way too late posting screencaps on his Twitter.

this article has been modified since it was originally posted;
see change history