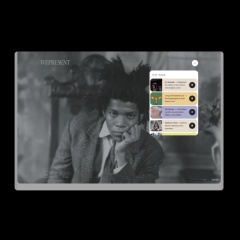 Inspired by the evolving habits of consumers today, the platform is taking digital experiences one step further by empowering the audience to take control of their own experience. Laying the foundations for audience experimentation, new functionalities include an audio player for long-read stories, a highlight reel that condenses a story into its key elements for on-the-go reading, a film playlist, and a reading list to allow audiences to save stories for later with a jump back in module. Live on WePresent, functionalities have been designed to create a seamless and innovative way for users to choose how to experience a story.

Speaking of the redesign, Co-Founder and Chief Creative Officer at WeTransfer, Damian Bradfield said, As a company created by creatives for creatives, WeTransfers digital arts platform WePresent is going to be one of the most important cultural destinations in the world. In order to fulfil our ambitions we needed to create a new home to house the work and allow users to interact in ways unseen anywhere else.

In four years, WePresent has established itself as a modern-day community of creatives across the globe, cementing WeTransfers status as a patron of the arts and company founded by creatives for creatives. On a mission to use business as a force for good, the foundations of WePresent were built from WeTransfer donating up to 30% of its advertising real estate to raise awareness for artists, creative work, and the worlds most pressing issues.

Now WePresent operates as a team of curators, editors, and producers to offer creatives the tools, space, freedom, and support to expand beyond the traditional confines of the gallery and exhibition space. Through pioneering collaborations with emerging talent and global trailblazers such as Marina Abramović, Renell Medrano, Lisa Taddeo and Riz Ahmed, WePresent continues to reach WeTransfers 87 million monthly active users in 190 countries, with new creative experiences every month displayed on the iconic platform.

Editor in Chief of WePresent, Holly Fraser said, As WeTransfers cultural torchbearer to a growing monthly audience of 3 million, our vision is for WePresent to continue collaborating with artists to create work that pushes the boundaries of creativity, while becoming the most representative creative platform in the world. From the Oscar-winning film commission with Riz Ahmed, to world-changing online art experiences developed in collaboration with Marina Abramović, our new site will be a unique destination for the arts. Our audience will be able to explore an Artist Directory of almost 1,000 artists from over 100 countries around the world that WePresent has worked with so far, while being able to engage with cultural content in new ways, be that through audio, interactive experiences, long-form pieces or programmed events.

To mark the new era of the platform,  Solange Knowles – a pioneer across the fields of music, visual art, and performance – will follow Marina Abramović as WePresents first Guest Curator in 2021. The  year-long collaboration between Solange and WeTransfer is designed to inspire radical conversations that amplify vital voices and conceptual imagining across art, design and architecture. As with Abramović, the first part of Solanges Curatorship will see her spotlight four artists from around the world including Dozie Kanu, Elliott Jerome Brown Jr., Autumn Knight and Jacolby Satterwhite on WeTransfer. The digital exhibition will be supported by features on WePresent detailing Solanges curation and what it is about the artists practice that make them unique.

Speaking about being WeTransfers next Guest Curator, Solange Knowles, Founder, Creative & Art Director of Saint Heron said, I am delighted to be working with WePresent this year to uplift vital voices in art and design, starting with a selection of artists who I feel are pushing boundaries to create new worlds and experiences for audiences to discover for years to come

Part One will be live exclusively on WePresent  on wepresent.wetransfer.com  with Part Two to be unveiled in Summer 2022, and Part Three in Autumn 2022

A Manifesto by Ai Weiwei for WePresent

Ai Weiwei,  one of the most important artists and activists working today, constantly questions political oppression and the power dwelling within a human being. For WePresents A Manifesto By series,  Ai Weiwei has written a 10-rules to share messages of freedom and empowerment to millions of people worldwide. Ai Weiweis commission is the latest in the Manifesto series which includes  musician Willie Nelson, Patrisse Cullors the co-founder of BLM and Nadya Tolokonnikova from Pussy Riot.

Intended for daily inspiration and discovery, the new look Artists Directory  serves as an encyclopaedia of over 1000 previously commissioned artists from around the world. The directory will see WePresent spotlight creatives from over 100 countries around the world including the likes of Revital Cohen & Tuur Van Balen (Belgium), Vivienne Westwood (UK), Karrabing Film Collective (Australia), Himali Singh Soin (India) and Tabita Rezaire (French Guiana), amongst many more talented artists. Running in tandem with the directory is a new events section launching this spring to invite viewers to interact with WePresent – be that through IRL exhibitions, workshops or screenings, or digitally through podcasts and online events.

WePresent reveals an essay penned by author of bestselling novel Acts of Desperation Megan Nolan, exploring our relationship with social media and how we present ourselves in the online sphere. Part of the WePresent Literally Series, Ways of Seeing is a nod to the John Berger book of the same name, with Megan describing the sensation of documenting and sharing a life, while simultaneously watching other people do the same. What does it do to us, and what happens when we stop?

WePresent is WeTransfers digital arts platform, acting as the companys cultural torchbearer to a monthly audience of 3 million in around 190 countries. Collaborating with emerging young talent to renowned artists such as Marina Abramovic, Riz Ahmed, FKA twigs and Bernardine Evaristo, WePresent showcases the best in art, photography, film, music, literature and more, championing diversity in everything it does. The platforms commissions range from editorial features to films, illustrations, photography series, events, installations and social media activations, with an aim to offer a fresh take on the magic and mystery of creative ideas.

WeTransfer streamlines the workflow process for millions of creative professionals. Its suite of creative productivity tools make it easy to collaborate, share and deliver work. WeTransfer has more than 87 million monthly active users in 190 countries.

As a certified B Corporation, WeTransfer has long been a champion of using business as a force for good. Since its founding in 2009, WeTransfer has donated up to 30% of its advertising real estate to raise awareness for artists, creative work, and the worlds most pressing issues

Solange Knowles is a Grammy Award-winning singer, songwriter, and visual artist. A pioneer across the fields of music, art, and performance, Solanges work serves as a deeply intimate portrayal of Black womanhood in the US. In 2013 Solange established Saint Heron, a multidisciplinary platform, studio, and creative agency with a mission to build spaces that engage radical conversation in thoughtful, original works that amplify vital voices and conceptual imagining across art, design, architecture, fashion, and literature. Most recently, Saint Heron has launched its ceramics residency program, which promotes the spatial sensibilities and creative innovation of Black and Brown women practicing ceramic art. Solanges work in music and the arts has led to her being named the 2022 NYU Global Trailblazer Award for Creative and Artistic Excellence, Harvard Universitys Artist of the Year in 2018. In February 2020, Solange received the inaugural Lena Horne Prize, which honored excellence at the intersection of arts and activism.

Solange has conducted performance art shows across the globe including at the Sydney Opera House (2020), the 58th International Art Exhibition of the Venice Biennale (2019), The Getty Museum, Los Angeles (2019), the Elbphilharmonie Hamburg, Germany (2019), the Guggenheim Museum, NYC (2017), and the Chinati Foundation in Marfa, Texas (2017). She has exhibited video art installations at Londons Tate Modern and premiered the interdisciplinary video and dance performance piece, Metatronia, which featured Metatrons Cube, 2018; a sculpture conceptualized and created by Solange, at the Hammer Museum in Los Angeles. Her work in other artistic mediums and music have led to a defining career of music, visual art, and activism.

Saint Heron is a multidisciplinary platform, studio and creative agency with a mission to build spaces that engage radical conversation in thoughtful, original works that amplify vital voices, and conceptual imagining across art, design, architecture, fashion and literature. Established by Solange Knowles in 2013 as a call to community; creating a hub for music, arts and cultural conversations of their own. The company built a legacy through the creation of special projects such as the release of an eponymous musical compilation, visionary content from creative talent, and thoughtfully curated events and art experiences in collaboration with Hauser & Wirth, The Metropolitan Museum of Art, Parsons School of Art & Design,  The International Woolmark Prize 2021, Nike, Google and Pitchfork.

This news content was configured by WebWire editorial staff. Linking is permitted.