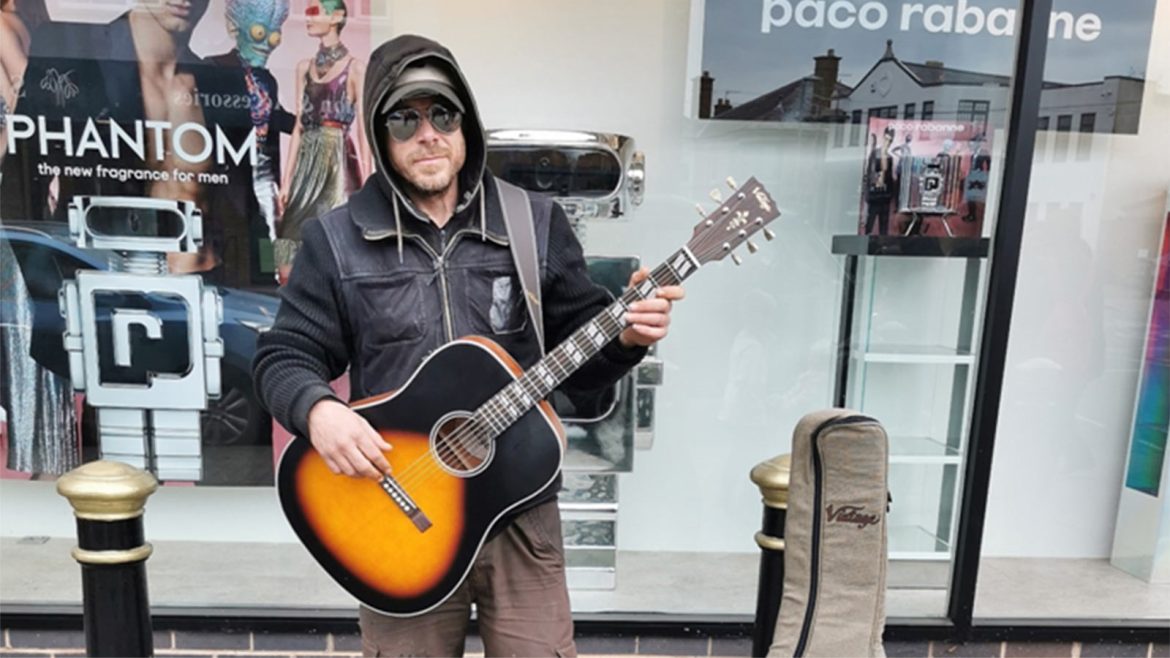 A homeless busker in the UK who woke up to discover his guitar had been stolen has become the recipient of a brand new instrument from UK distributor JHS.

The 47 year-old musician – who hails from South Africa and goes only by the name Philip – was sleeping outside a perfume store in the UK town of Malvern Link on April 17 when the guitar was taken.

Police were able to view CCTV footage from another store on the street, which showed the thief sneaking up to the sleeping Philip’s position around 11pm and picking up the acoustic, before walking off.

“When I woke up, it was gone,” Philip told The Daily Mail. “I’ve been going through a bit of a rough patch, and this has made me feel worse on top of that, but I try not to let things affect me too much.

“I’ve become quite well known performing in the area, so I didn’t expect anyone would do something like that. It was a mid-range Yamaha guitar and it’s all I really had… I can’t go without a guitar.

“I couldn’t believe it when it was stolen, I don’t understand why somebody would want to pinch a homeless person’s guitar.”

Locals were equally shocked by the crime and soon took to social media in an attempt to locate a replacement. Enter UK distributors JHS Ltd., who have since gifted Philip a brand new acoustic electric.

“We thought hard for an appropriate guitar that would be ideal for Phil,” says JHS CEO Dennis Drumm. “Settling on a recently launched ‘Historic’ Series dreadnought electro-acoustic model from our own branded Vintage guitar series, along with a case, leather strap and Dean Markley strings.”

The news proved welcome to Philip. “I was overjoyed,” he says in a new statement. “I’m not an amazing guitarist but I need a decent acoustic guitar for the playability and sound, as people around here seem to like my stuff, and this guitar is ideal. Thank you JHS, your kindness is very much appreciated.”

In addition, the police have since apprehended the guitar thief and were able to return Philip’s original instrument, which he reportedly intends to sell in a charity auction.

As he tells The Daily Mail: “I only really need one decent guitar…”

Matt is a freelance journalist who has spent the last decade interviewing musicians for the likes of Total Guitar, Guitarist, Guitar World, MusicRadar, NME.com, DJ Mag and Electronic Sound. In 2020, he launched CreativeMoney.co.uk, which aims to share the ideas that make creative lifestyles more sustainable. He plays guitar, but should not be allowed near your delay pedals.