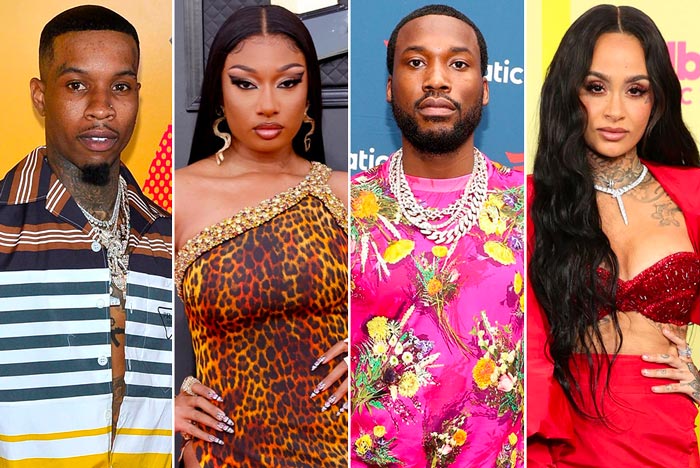 Just days after being released from custody, Tory Lanez returned with the latest installment in his “Fargo Fridays” music series.

On “Mucky James,” the embattled star reflects on his trials and tribulations amid the Megan Thee Stallion shooting case.

“I was at a high in my career / You think I’d come out here and ******,” he raps while wearing a hat with horns. “And if you think I would do that shit, you on some stupid shit / I don’t need to do that shit, my Haitian hoes will woo a bitch / I can’t lie, temporarily that bitch came and ruined shit.”

He also has a message for those who feel he should remain silent. “Hey Tory, stop talking about it / I wish I could but dawg, I’m only human / Sometimes that shit be getting on me,” he adds.

Later, he addresses his fallout with Meek Mill. “Meek Mill, he used to be my dawg / He did some flaw shit to me / And when I brought it up, lil cuh wouldn’t even talk about it / Ain’t beefin’ with you, cuh, I swear I’m more hurt than anything.”

He also brings up Kehlani, who removed Tory from her song “Can I” following Megan’s accusations. “Sometimes I think about Kehlani and how we ended things,” sings Tory, who previously addressed their friendship on his 2020 album DAYSTAR.

Elsewhere, he honors Trina for her loyalty. “I owe you 20 Ms / Been havin’ the world all on my shoulder, but I ain’t forget about you / You held me down when I most needed.”

During a court hearing last week, a judge found Tory in violation of the discovery protective order and personal contact order. He was handcuffed in the courtroom and taken into custody before being released on $350,000 bail. As part of the conditions of his release, he is “not to mention the complaining witness in this case in any social media.” A trial is set for Sept. 14.