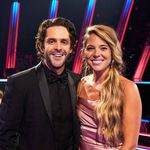 Country crooner Thomas Rhett recently released his sixth studio album, “Where We Started,” but his creative wheels are still turning. The “Slow Down Summer” singer recently (May 16) sat down with Big Machine Label Group to chat about a unique project he’s been toying with for quite some time.

The chart-topping artist is the father of – Willa Gray (6), Ada James (4), Lennon Love (2), and Lillie Carolina (6 months). After years of raising daughters with his wife Lauren Akins, Rhett believes he could share some parenting tips and tricks.

As many musicians like Brett Young, Jimmy Buffet, Dolly Parton, Jimmie Allen, and Kelly Clarkson created children’s books – Rhett wants to pay it forward with a collection of songs just for new moms and dads. The hitmaker told BMLG that he shared the idea with his social media followers and received an unexpectedly positive reaction.

“I posted one thing on Instagram last year, of this made up idea of an album called ’Parenting,’ I think it was called, or ’Dadding,’” he said while laughing. “But, kinda just encouraged a lot of fans to send me titles of what they think would go on this, and there was like five or 6000 comments of just things that were cracking me up,” he added.

Rhett continued to rattle off the hypothetical song titles that would make up the parent-friendly tracklist. For instance – “Eat Your Breakfast,” “I Think You’re Just Sleepy,” “Where’d You Learn That Word,” “Sugar Diet,” “Please Don’t Draw on the Walls,” and “If I Wake Up at 4 AM I Can Workout … Maybe.”

Rhett confirmed that there are no plans to release the collection yet, but says he would enjoy the writing and recording process.

“I feel like that’d be super fun, you know, just to write from a super self-deprecating point of view of how challenging it is just to parent,” the vocalist declared. “That’s something that would be intriguing to me, and it also sounds really fun, cause I feel like there’s a lot of people out there that would really enjoy listening to a piece of music like that.”

Although he jokes about being a girl dad, he previously shared that the little things in life make him a proud parent. During an interview with Mashed, the singer-songwriter revealed that he finds joy in making his daughters lunches at the crack of dawn.

“When I wake up in the mornings to make the kid’s lunches – I wouldn’t do this — my wife loves to take cookie cutters. If I make a turkey sandwich, or a peanut butter sandwich, we’ll stamp the sandwich with a heart or a rainbow,” he told the publication. “I find myself crushing the outer areas of the sandwich at six o’clock in the morning.”

While there are too many perks to count, he did mention a struggle that the Rhett household faces randomly.

“When all four kids, including me and Lauren, have been all sick at the same time with different things. One’s got a stomach virus, or one’s got a cough, and one’s got a fever,” he shared. “It is like, because you don’t want any of your family to come over and help because you don’t want anyone else to get sick, you’re like, ’I don’t want to get off the couch right now,’ but everyone needs something from me or something from Lauren. When everyone’s sick, it’s survival mode at that point. That would be the craziest bit of parenting for us, for sure,” he concluded.

Although the two encountered a few bumps in the road, Rhett and his wife Lauren have officially got parenting down to a science. Come June 17, Rhett will be embarking on his nationwide Bring The Bar To You Tour and is eager to bring his oldest daughters along for the ride. Rhett opened up about the father-daughter dates he has in store on his new show “Where We Started with Thomas Rhett,” on Apple Music Country.