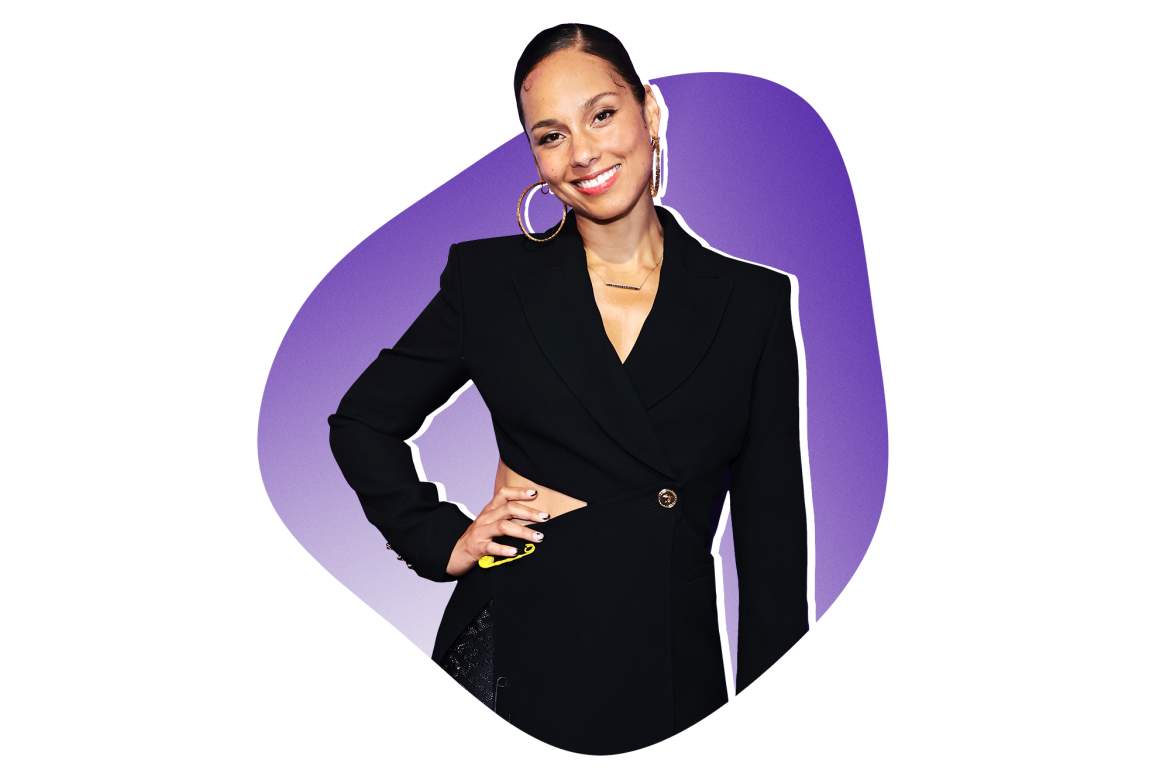 Less than 24 hours after this week’s Met Gala, Alicia Keys is nestled into a sofa, looking unfailingly fresh-faced given the circumstances. She unscrews a tiny pot, revealing a clue. “I’m a bit of a bright girl,” she says of her shade preferences among Keys Soulcare’s new cheek tints. The vivid geranium in her hand is called Powerful, part of a nomenclature that aims to lend a spiritual boost to those so inclined. “You might need a little more energy, and you need the power,” she floats. (In fact I do, though the makeup artist in the next room has aptly paired me with the ruddy, clay-colored Enigmatic.) Keys points out the fine print along the glass rim, one of the mantras that accompanies each item in her wellness collection: I choose my own path.

That much is true of the Grammy-decorated musician, who has carved out a singular place in the conversation around beauty, beginning with a bare-faced photo shoot in 2016. For Keys, who landed her first major-label record deal at 15, the world of ever-present cameras reinforced a cycle of stress for her touch-and-go skin. “I always felt I had to cover it and cover it and cover it, and it just got worse and worse and worse,” recalls Keys, looking back on her headline-making decision to pare it all back. As a luminous face of the makeup-free movement, it made sense that she would launch Keys Soulcare in 2020 with a bakuchiol-powered face cream. Now, with an edited collection of “skin-color hybrids”—including tinted lip balm, clear brow gel, and cream blush, all of which Keys debuted on the Met Gala red carpet—she’s rewriting that narrative once again.

It’s an exercise in navigating between the all-or-nothing poles. There might be absolutists who shake their heads at her return to flushed lips and liquid liner. “People like to keep you in that box and never let you out,” says the musician, who tends to avoid the rabbit hole of internet comments. “I realized along my journey that the only beauty standard is the one you create.” That sentiment inspired the collection’s overarching name: not makeup but Make You. “I was asking myself, ‘Who do you want to be? You want to be this person that’s freaking out when you pick up your son from school because you don’t have a full beat, or are you just a human who experiences life in different ways?’” she says.

Such flexibility is embedded in the formulas themselves. The lip balm—offered in five shades, along with a transparent version—imparts a buildable wash of color within an avocado oil–enriched base. Similarly, the cheek tint (featuring sunflower and safflower seed oils) is designed to mimic a naturalistic flush. The coexistence of a stripped-back aesthetic alongside an adorned one is more than a tenet in Keys’ beauty philosophy. It’s also the structure of her 2021 album, Keys, with sparer, piano-accompanied tracks (“Originals”) side by side with room-filling, produced versions (“Unlocked”). “Sometimes you want to turn up and sometimes you want to turn down, and that’s your prerogative,” says Keys.

There’s one volume shift on the musician’s mind lately: her long-awaited tour, which will take her through European arenas before she makes the rounds Stateside. (In August she plays Radio City Music Hall, a short walk away from her childhood roots in Hell’s Kitchen.) “My new song, ‘City of Gods,’ is a kind of New York anthem, and it just feels so good to sing,” she says, when asked what tracks are itching for a larger audience. “There’s one off the Alicia record called ‘Authors of Forever’—I love that because it says that we’re the authors of our own story.”

By now, she knows how to recreate the comforts of home while on the road. “The Keys Soulcare candle, that’s a must,” she says of the oat milk–sage blend (fitting for a singer who avoids dairy for her vocal performance). “These gummies are literally on my rider,” she says brightly, holding up a bag of SmartSweets. “They have four grams of sugar, yet you still get that sweet high! And I always have a humidifier in the room. That helps a lot.”

A likely addition to the rider might be a fresh stack of tinted lip balms, which have arrived just in time for a subset of fans: mothers, like Keys, who appreciate that balance of practical and feel-good. Is there a gift she’s wishing for that hits that same sweet spot? “The only thing I ever usually want for Mother’s Day is about three hours to read,” she says with a laugh, imagining a kid-free afternoon with a bathtub and a book. “Just maybe I fall into a nap,” she adds, painting a reverie that sounds like the lip balm’s mantra: I put myself first. “That type of vibe.”

Tagged as “The, Beauty.