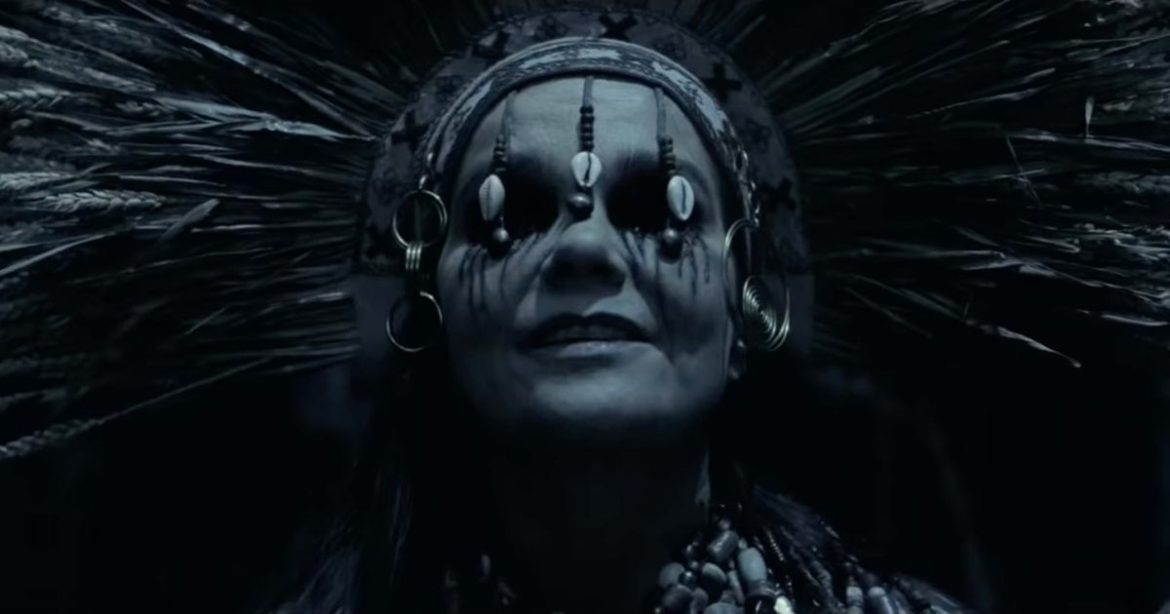 The Northman, Robert Eggers’s Icelandic Viking epic, is a harsh hero’s quest full of action and abs. It’s also a Björk music video. Overrun with psychedelic rituals and an endless stream of blood, the film wouldn’t be too out of place in Björk’s surreal filmography. The Icelandic singer famous for her eccentricity (see: her infamous Oscars swan dress) appeared in the trailer as a seeress with puka shells for eyes. “Remember for whom you shed your last teardrop,” she whispers in a feathered headdress over footage of Uncle Fjölnor (Claes Bang) slashing his brother’s (Ethan Hawke) head off so he can shoot his shot at Nicole Kidman, Viking queen. Björk was billed at the top of the untitled Northman subway posters, right next to Willem Dafoe and Hawke, even though her first major film appearance since 2005’s Drawing Restraint 9 was only two minutes long. Nevertheless, the Cornucopia artist is a star, and we watched every second.

There were a few false alarms to Björk’s anticipated appearance due to actors with thick Northern European accents vaguely resembling her voice. But when Björk finally comes onscreen, Eggers gives her the movie-star entrance she deserves. Alexander Skarsgård’s Amleth wanders into a dark building filled with stone statues where Björk waits patiently to deliver line after line of cryptic prophecy. They don’t delve too much into her character’s lore, but she plays one of three mythological Norns, an immortal woman who spins the thread of fate — hence the drop spindle in her hand. Although Björk is kind enough to deliver some major plot foreshadowing, Amleth calls her a “Slav witch” and doesn’t flinch once when she opens his grimy palm to place a teardrop in the center. Ungrateful much?

Skarsgård told NME that they shot Björk’s scene in a “burnt-out barn after the big raid.” “Behind her I could see it was just this gigantic full moon right behind her head and it felt so perfect for that scene and her character and the way she looked,” he idolized her, as he should. Despite the brevity of Björk’s moonlit moment, The Northman wouldn’t be complete without her. “I was introduced to Björk by Robin Carolan, who’s one of the composers,” Eggers told GQ. “And then Björk introduced me to Sjón,” the Icelandic poet who co-wrote the script. The writers first met while eating salmon at Björk’s house. What The Northman may lack in Björk, it makes up for in stomach-churning fight sequences with lots of face smashing. It might not be for everybody, but Björk’s two-minute ASMR seeress role play is any fan’s Valhalla.

The Northman Is a $90 Million Björk Music Video

Tagged as Million, Northman Is.