2,221—That is the number of individual recordings, as certified by Guinness World Records, on which Ron Carter has played, earning him the official title of Most Recorded Jazz Bassist in History.

And that was in 2015. More than six decades into his career, he’s still at it, not only lending his expertise to new studio recordings by a wide variety of artists, but also performing live as well. On May 10, the bassist played with three different groups—a trio, a quartet and an octet—during the “For the Love of Ron: 85th Birthday Celebration” at New York’s Carnegie Hall. Prior to that, in late March, he piloted a six-night run—two shows per night—at New York’s venerable Blue Note Jazz Club.

For Carter, the worst part of the lockdown is that it put the brakes on live music. He’s worried that he might have missed out on something new.

“I’m kind of behind the line as to who is doing what,” he says. “I haven’t had a chance to hear people live. I hope we can get everybody outside of their homes soon.”

Ron Carter’s discography reads like a jazz who’s-who. He is most well-known for his membership in trumpeter Miles Davis’ Second Great Quintet, which also featured pianist Herbie Hancock, saxophonist Wayne Shorter and drummer Tony Williams. E.S.P., Miles Smiles, Filles de Kilimanjaro, Nefertiti and Live-Evil are among the classic Miles albums on which Carter appeared, and the bassist’s handiwork can also be heard on releases by McCoy Tyner, Horace Silver, Wes Montgomery and many others from that early period. He then spent several years accompanying leaders on albums cut for CTI Records, including George Benson, Freddie Hubbard and Hubert Laws.

Carter has also ventured outside of the jazz realm on occasion—his credit can be seen on the jackets of LPs by Roberta Flack, Billy Joel, Aretha Franklin, Paul Simon and others. (On April 2, he also joined Bob Weir at New York’s Radio City Music Hall for a must-hear version of “Dark Star.”) As if all that hasn’t kept him busy enough, he’s been releasing albums under his own name since 1961, beginning with Where? His most recent, The Brown Beatnik Tomes, is a shared project with Danny Simmons, co-founder of Def Poetry Jam.

Throughout his career, and regardless of the nature of the music, Carter says his role is always “to make others sound better,” no matter who he is performing with.

“My notes dictate what a group sounds like, whether I’m the leader or a sideman,” he says. “When I leave my house, I leave my ego at my desk, and bring a spare set of ears.”

To him, every session is as important as the one before; he refuses to choose a favorite or name a single recording experience that ranks at the top. “I look at it as 2,200 classes on how to do the bass better,” he says. “All of them have offered me an opportunity to get ahead, whether it’s their leadership, how they picked the tunes, how they ran a session, what their attitude was or how well prepared they were. Making those records, you understand how this music can work and also how it’s not supposed to work. It gave me a chance to see all these various leaders in situations playing with strangers, and I was oftentimes the stranger because they wanted a bass player with a big name. I can fit that role. If I say one was the most important, I’d expect to get 2,221 phone calls about that.”

Carter’s approach to session gigs and live performance extends to his work as an educator. He has taught at numerous facilities, including the Manhattan School of Music, Juilliard and The City College of New York. Carter also served as the artistic director of the Thelonious Monk Institute of Jazz Studies. “Teaching gives me a chance to see how I feel about the bass,” he says. “It gives me a chance to understand how important the bass is in music and how to make it important. Students ask questions that don’t occur to me, and I have to learn how to answer those questions in a civil, non-threatening manner that makes them feel comfortable. It also increases my skill level because I’ve got to play what I’m asking them to play.”

But what would he say to a student whose stated goal was to be able to play like Ron Carter? “I would tell them: ‘I can show you my devices,’ and then, if they have the discipline and the skill level to make it work for them, they’ll find a way to evolve. But good luck playing like me.”

Carter’s recorded output includes traditional big-band jazz, solo bass, avant-garde and much more. He’s continued to grow as a musician through all of jazz’s shifts, to apply his skills in different settings. But, he says, it’s not so much the changes in music that occupy his mind as it is the loss of the delivery systems bringing that music to audiences. He frets over the decline in popularity of vinyl albums (and is pleased that the format is making a comeback), jazz radio stations and record stores. “Those three avenues of hearing the music have disappeared, and I rue the day when that started,” he says.

Despite the fluctuations in the music business, Carter promises to keep creating as long as he is able to. “I can still play, but I’m not looking to work every hour of the day,” he says. “I’ll know when it’s time for me to scale back. That’s what I call it. I don’t call it retirement.” 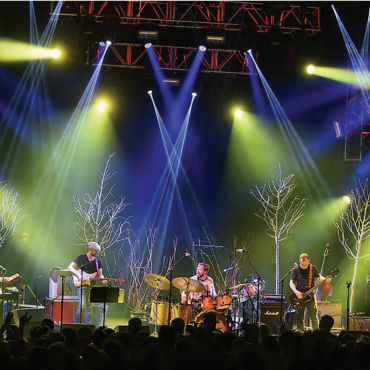 ');var c=function(){cf.showAsyncAd(opts)};if(typeof window.cf !== 'undefined')c();else{cf_async=!0;var r=document.createElement("script"),s=document.getElementsByTagName("script")[0];r.async=!0;r.src="//srv.clickfuse.com/showads/showad.js";r.readyState?r.onreadystatechange=function(){if("loaded"==r.readyState||"complete"==r.readyState)r.onreadystatechange=null,c()}:r.onload=c;s.parentNode.insertBefore(r,s)}; })(); photo credit: Michael DiDonna *** On Saturday, May 14, Joe Russo’s Almost Dead kicks off Westville Music Bowl’s Summer 2022 Season. To mark the occasion, we are sharing our September 2017 JRAD cover story, which has yet to appear online in its entirety.   Relix publisher Peter Shapiro first met Joe Russo in the late-‘90s when the drummer performed at the nightclub Shapiro […]