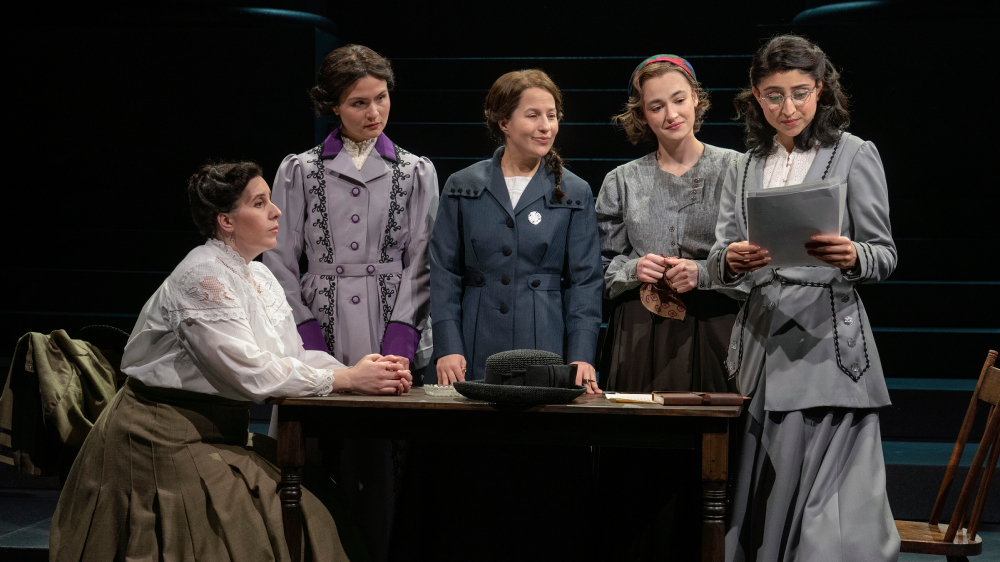 Oh, what mean and nasty things men said about women who dared to fight for the right to vote in America. Here are some of those choice insults, taken from the very first song (“Watch Out for the Suffragette”) of “Suffs,” the remarkable, epic new musical by Shaina Taub now premiering at the Public Theater. Coming from a bunch of men portrayed as vaudeville clowns (and played by a cast made up entirely of women and non-binary performers), the smears run from “she can’t take a joke” and “she sure as hell won’t shut up” to the enduring insult that “she can’t get a man, so she’s a suffragette.”

That word, by the way, is anathema to these courageous and dedicated suffragists, who resent the diminutive form that patronizes them and diminishes their cause of securing for women the right to vote. This scrupulousness about language isn’t nitpicking, because Taub has written the smart lyrics as well as the stirring music for the high-powered, sung-through score that has been entrusted to music director Andrea Grody and the full-bodied orchestra she oversees.

Over the course of this almost three-hour show (which could be even longer to better accommodate the stuffed-and-rushed second act), Taub manages to dramatize the complex origins and contentious development of the women’s rights movement by filtering it through the political coming-of-age narrative of Alice Paul, one of its seminal leaders. Making this a genuine tour de force, the composer-lyricist-writer also plays this central role. For the most part, her passionate commitment gives her the thrust to pull it off, although I still look forward to seeing what other actors might bring to the part.

Director Leigh Silverman draws on a deep reservoir of skill to humanize the many, many characters in the play. Hell, she wins admiration just for directing the physical traffic that has everyone running up and down a steep set of stairs while avoiding bumping into the giant black columns that dominate Mimi Lien’s expressionistic set. Choreographer Raja Feather Kelly surely deserves some credit for that, as well.

Alice’s political rite of passage formally begins when she shows up at Suffrage School to learn the ropes. The women’s rights movement founded by Susan B. Anthony is already 60 years along, with 11 states committed to voting rights for women. But to Alice, who is young and ambitious, 11 states in 60 years seems pathetic. At this rate, women won’t get what they’re fighting for — an equal rights amendment to the Constitution that will secure these rights in perpetuity — for another half century.

Why the foot-dragging, she wants to know. The answer becomes obvious once she starts meeting the stalwarts of the movement like Carrie Chapman Catt, who is perfectly starchy in Jenn Colella’s commanding performance. As Catt explains in a firm and resonant voice, the strategy of the National American Woman Suffrage Association is to “organize, agitate and educate” while keeping their dignity and not getting the men all grumpy.

“Make a proper appointment,” Carrie instructs the newcomers to the cause. Their demeanor should be one of “dignified agitation,” she advises in a ladylike voice. So do not “antagonize, irritate, enervate” the men. But Alice has a better idea — a protest march on Washington. “We need to stand up and demand our rights,” she declares. “It’s time we fight for a federal amendment.”

And so the die is cast, with Alice sounding a rousing, martial call to arms (“Finish the Fight”) as leader of a splinter group that really means business. Now identified as Alice’s primary (but still sisterly) antagonist, Carrie fades from the scene. At a future time, she will finally voice her response (“This Girl”) to Alice’s incendiary rhetoric, and it’s a beauty, one of the finest moments in the show. But for now, Alice has turned the women’s movement in a new militant direction. Forget the ladylike manners; from now on, the women vow to agitate with a vengeance.

This is where the major stars of the movement come in. To lead their historic march on Washington, the newly energized suffragists break out the superstar power of Inez Milholland (Phillipa Soo), “the poster girl for radicalism” who will lead their parade — on a white horse, no less. “Comrades, we must put the sex in sex equality!” she vows. Although the lovely Soo is miscast as this “glamorous, dazzling” sexpot who will become the new face of the movement, she has perhaps the best voice in the show, so let’s forget about her discomfort in the role.

Once the rebels find their voice, in inspiring numbers like “Find a Way” (a real barn-burner) and “Finish the Fight” (an even hotter barn-burner), more leaders lend their voices to Alice’s crusade. There’s the militant labor organizer Ruza Wenclawska (Hannah Cruz) and Mary Church Terrell (Cassondra James), the first president of the NAACP.

Given a rare quiet moment in a hot light (Natasha Katz is the designer), the true showstopper is journalist Ida B. Wells, sitting quietly at a writing desk and breathlessly introduced as “one of the most published Negro reporters in the nation.” In Nikki M. James’ beautifully clear-cut turn, the composed but inwardly seething writer puts Alice in her place when she comes to ask for her benediction. “My people cannot vote if they are hanging from trees,” she dryly declares. “Do you not realize you’re not free until I’m free?” she demands in her harrowing solo, “Wait My Turn.”

Events pile up after the historic march on Washington, after which the suffragists are declared “Amazons” and Inez, their figurehead, is pronounced their “Warrior Queen.” To my eye, the plethora of historical material clearly calls for an additional act: Lacking the space to breathe, the show chokes once the reformers are granted an audience with President Woodrow Wilson, who “loves the ladies” with all his heart “until they start to speak,” and shoos them out of his office for the next several years.

Having reached the limits of their patience with polite discourse, the suffragists become more and more desperate in their public grievances, which range from silent protests to acts of civil disobedience that land their leaders in jail. In the midst of all the misery, including a bit of torture and one sad death, there is one — and only one – song that counts as a love duet. (Let it be said here, however, that Taub writes love duets the way Bertolt Brecht wrote love duets, which is dripping with sardonic mockery.)

Nonetheless, “If We Were Married” is a special treat. Sung by two young lovers (Tsilala Brock and Nadia Dandashi), this lovey-dovey duet is like a landmine full of razors. He’s full of promises; she’s quick with the facts.

“Marriage is essentially a death trap for women,” she informs him. The dutiful wife would be turning over to her husband all her personal possessions, her private property, her legal authority and whatever shreds of autonomy she had left.

Even with all that, there’s still a whole lot of plot to go in the second act. Keep alert for Ida B. Wells’ heart-bursting reprise of “Wait My Turn,” Carrie’s promised “This Girl” and the eventual fate of the 19th Amendment (“I Wasn’t There,” a kick of cruel irony). As for the ratification and formal verification – well, I’ll tell you all about it on the next march.