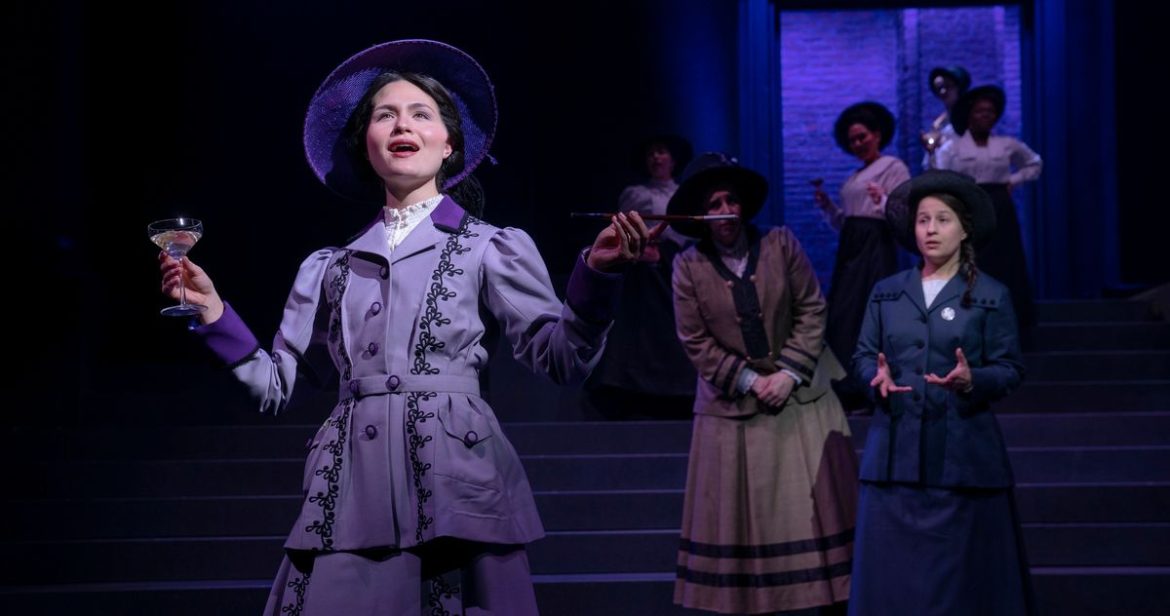 Phillipa Soo in Suffs, at the Public.
Photo: Joan Marcus

If you would like an excuse to get sloshed during the workday, play a little game. Do a shot when anyone talking about Suffs mentions Hamilton. It’s unavoidable: They’re kindred projects, opening at the Public Theater in the same room, even featuring (in a cosmetically similar role) the same performer, Phillipa Soo. Suffs is a sober and sobering piece of work, but conversations about it — if we play this right — can be intoxicating.

Each show comes from a single multi-engine mind: Lin-Manuel Miranda and now Shaina Taub are the rare musical theater artists who can write book, music, and lyrics. Both composer-playwrights built their musicals around themselves. For a long time, Miranda played Hamilton, and Taub now plays her heroine, the suffrage activist Alice Paul. Both creators also place their emphasis, firmly, on work. Suffer, yes, our founders did that. Struggle — most definitely. But both musicals elevate sedulousness, an under-celebrated trait, to something next to saintliness.

Suffs takes place on a set of gray steps, in front of huge columns. (Mimi Lien designed the set.) We’re outside some government building — rather, we’re outside government itself. The female-and-nonbinary cast dance and sing on these steps, waiting to be let into the halls of power, sometimes part of a nameless ensemble, other times solidifying into figures from the suffrage pantheon, like Mary Church Terrell (Cassondra James) or Ruza Wenclawska (Hannah Cruz). This is the culmination of a 60-year fight we know ends with the 19th Amendment’s ratification, but we still, somehow, never feel the flash of triumph. Director Leigh Silverman and her lighting designer Natasha Katz keep the two-hour-and-forty-five-minute musical largely in the dark, spotlights following the performers while the huge patriarchal institution looms gloomily behind them. Even when those doors finally open, history does not get appreciably brighter, though you can feel the musical struggling to assert a little joy.

Suffs is at war with itself because it’s about a movement that was itself divided. In her script, Taub’s epigraph by Susan B. Anthony reads: “There never was a young woman yet who did not think that if she had had the management of the work from the beginning, the cause would have been carried long ago. I felt just so when I was young.” Anthony has been dead seven years when Suffs begins, but that pattern of the young rising impatiently to replace their elders is the musical’s grand arc. Paul chafes against the slower tactics of Carrie Chapman Catt (Jenn Colella), the head of the National American Woman Suffrage Association, and just as the musical concludes, we learn that Paul has lived long enough to see the cycle repeat.

Songs about “standing shoulder to shoulder” with other women repeat in sourer keys, as the women disagree about how to proceed. In 1913, is Paul right to drive straight at a federal amendment, rather than continuing the NAWSA’s state-by-state campaign? In 1916, is she right to insist that her beloved friend and fellow activist Inez Milholland (Soo, in sweeter but smaller voice than she was in Hamilton) continue her speeches even as her health falters? By 1917, when Paul is on a hunger strike in jail, enduring force feeding and threatened with permanent institutionalization, her rightness and wrongness seem less important than her passionate adherence to a cause that is manifestly just.

I wouldn’t say Suffs is a “warts and all” portrait, but it does acknowledge certain costs. One terrible cost was moral: Paul invited Ida B. Wells (Nikki M. James, always amazing) and other Black suffragists to a march on Washington, then bowed to pressure from Southern funders and told them to march in the back. (Wells refused.) This choice haunts the musical, which may explain why the whole production has a nightmarish tinge. Even cheery songs can seem downbeat, and victories are already acknowledged as partial and corrupted even when they are hard-won. Some of this melancholy quality is simple truth-telling and a refusal to romanticize. The rest, though, comes thanks to a certain repetitiveness in Taub’s musical choices, which can blend together over the course of the show’s 38 songs, and Silverman’s staging, which does too little to vary the production itself.

Taub represents the world outside the women’s organization as a violent cartoon, imagery that comes across brilliantly on the page, less so on the stage. The show begins with a vaudevillian chorus, the enormous cast all done up in male drag, complete with mustaches. “That crazy Medusa is as shrill as you get / She can’t get a man so she’s a suffragette!” they cry. The number needs enormous energy; it doesn’t get it. Mockery of these top-hat-wearing yahoos is crucial for leavening the mood, and Grace McLean’s clowning version of Woodrow Wilson (and in a dazzling virtuoso moment, Wilson’s wife, too) offers us a glimpse of how knockabout comedy belongs right at the core of Taub’s method. She’s worked out a ruthless equation: What the women are doing is serious, and what the men are doing is absurd. For the apotheosis of Suffs, we would need to feel both the gravity and the buffoonery, and right now, the production contains too little of the latter. At the risk of sounding like Carrie Chapman Catt, incremental change might be the answer. Fewer songs? A couple more jokes? A touch more light? The musical is already piercing and deeply felt and good. Just a few amendments to go, and, like a certain Constitution I could mention — it might be truly great.

Suffs is at the Public Theater through May 15. (Tonight’s opening performance was canceled after several members of the company contracted COVID.)