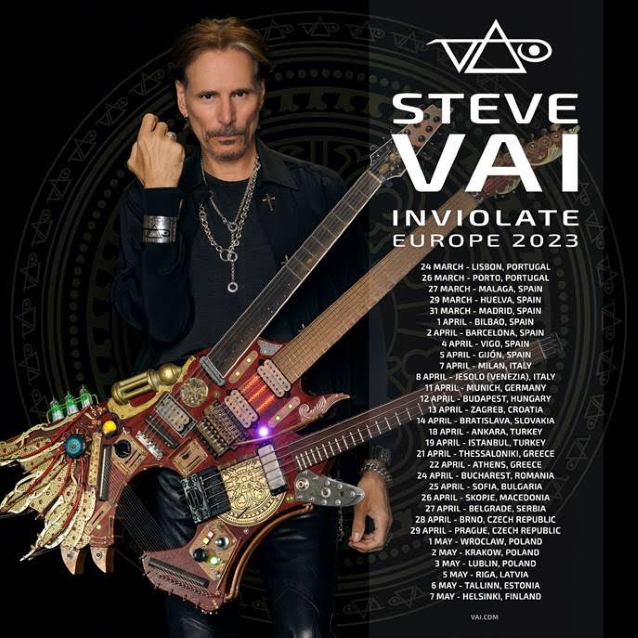 Steve Vai has announced a return to Europe for planned appearances in March through May. The second leg of European dates on the “Inviolate” world tour will begin in Lisbon, Portugal on March 24. The itinerary will bring Vai through Spain, Italy, Germany, Hungary, Croatia, Slovakia, Serbia, Bulgaria, Turkey, Greece, Romania, Czech Republic, Poland, Latvia, and Estonia prior to wrapping on May 7 in Helsinki, Finland.

For tickets and a variety of EVO Experience VIP bundles available, visit www.vai.com.

Vai shares: “Our previous fall tour of North America was outstanding. Myself and the band are as oiled up and ready as ever. I’m excited to finally bring the Hydra guitar to Europe as I missed doing that on the last EU run. The response from ‘Inviolate’ was tremendously positive and it showed in the press, the attendances and the energy in the audience and we are so much looking forward to this EU tour.”

This past year, Vai released a new studio album titled “Inviolate”. In support of the release, he staged successful tours of North America and Europe. This year, plans will take the guitarist, composer, and songwriters to most continents across the world as he continues to stage events on the “Inviolate” world tour.

Favored Nations / Mascot Label Group presented the official music video for “Teeth Of The Hydra”, which has now been viewed over 5.3 million times. Later this month, Steve will release “Vai / Gash”, an album he’s held in the archive for more than three decades.

Vai is a virtuoso guitarist, composer and producer, considered by many as one of the greatest guitarists of all time. In over 40 years in the industry, Vai has sold over 15 million records, received three Grammy Awards, and recorded with music legends like Frank Zappa, David Lee Roth, WHITESNAKE and many more. Vai has also toured extensively and recorded live projects with “G3” (collaborating with different touring lineups, including Joe Satriani, John Petrucci, Eric Johnson, Yngwie Malmsteen and Steve Lukather) and “Generation Axe”, a supergroup Vai formed with Zakk Wylde, Yngwie Malmsteen, Nuno Bettencourt and Tosin Abasi. Vai is the author of “Vaideology: Basic Music Theory For Guitar Players” (Hal Leonard),his inaugural music theory book designed to help both beginners and veteran guitar players.