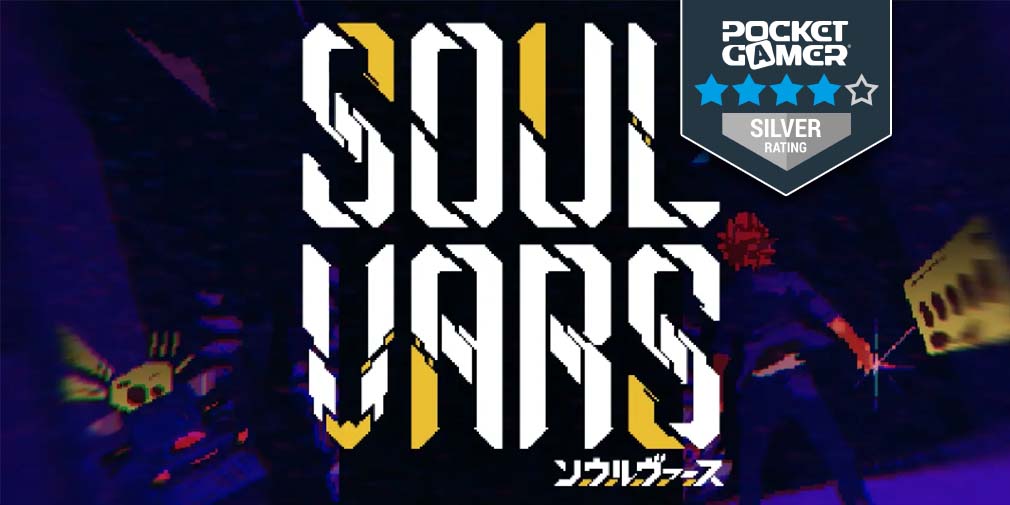 Set in a dark and futuristic world where Souls can be transformed into data, Soulvars tells the tale of a “soul bearer” named Yakumo sent by the private organization “DDO” on a mission to investigate variants. While it can be a little difficult to follow exactly where the narrative is going because of translation woes, the game does do a good job of reeling you in and keeping you hooked – but does this premium title have enough appeal to stand out from a sea of pixel-art JRPGs on mobile?

The pixel-art visuals of Soulvars add to the overall retro feel of the JRPG in that it really does capture that old-school vibe but with a modern twist. The game is in portrait mode, for one thing, and for another, the animations of the characters during battle and in exploration mode are fluid and lovely to look at.

Given the theme of the game, I can understand all the gloom and doom, but it does tend to feel a little repetitive at some point – at least, visuals-wise. The tones and colours are all very similar, but then again, that probably contributes to the atmosphere of the narrative.

What I absolutely loved about the aesthetics is the background music – the pumped-up beats made me feel totally energised with each new battle I faced. In fact, I loved the background music so much that I sometimes felt like I wanted to linger around an area just so I could keep listening to the musical score.

Of course, apart from the totally awesome music, what really lured me into the game was its deep combat system. Players take control of three characters that each have their own moves and skills in battle. Gear that you equip to your characters will come with their own deck of moves or Soulbits, which you can combine to unleash powerful attacks, charges, or defenses.

This unique mechanic will really require you to think strategically with each random enemy encounter, as certain combinations will yield normal, quick or heavy attacks. Enemies also have weaknesses you can take advantage of, as well as a Burst system that cancels their turn and lets you deal greater damage.

As for the exploration, you’ll enter certain parts of the city and roam around identical squares to get from one place to another. This honestly felt a little wonky to me, as you’ll have to tap on a grid of squares on the lower part of the screen to move around rather than intuitively tap at the scene your character is in. You can tap on items and people in a particular scene (elements you can interact with are marked with a red indicator), but if you need to move on to the next scene, you’ll have to tap at the mini-map below. Each square is identical, and it’s entirely possible to get lost way too easily.

You’ll also have to manually save your progress as you go along, which can be a little unsettling for players who are used to mobile games with auto-save functions.

A week into the game and I really do feel like I’ve barely scratched the surface of this expansive 20-hour title. Developed by a solo indie dev, Soulvars feels like a true labour of love, and I honestly can’t believe how well-developed it is knowing it’s all done solo. It’s also supposedly very well-received in Japan – unfortunately, the English translations aren’t too refined, as you’ll often encounter clunky dialogue and cut scenes that are lost in translation.

It’s in this sense that the mechanics of the game can be really, really hard to understand. The deep strategic element of the title’s combat system is already complicated enough – add that to the fact that descriptions aren’t clearly translated and you might just spend way too much time on the menu trying to figure out what to do.

Still, once you get past all that, the game is an enjoyable ride and is a true breath of fresh air from the too-many gacha RPGs on mobile these days. It’s a premium title that costs $5.49 a pop, but I believe the value you’ll get in exchange certainly makes it worth the investment.

Soulvars is a pixel-art JRPG set in a futuristic world where humans have tragic deformities thanks to the transformation of Souls into data. Made by a solo indie dev, the game boasts 15-20 hours of gameplay and a New Game Plus that’ll keep you occupied, and with that kind of runtime, you might just get enough bang for your buck.