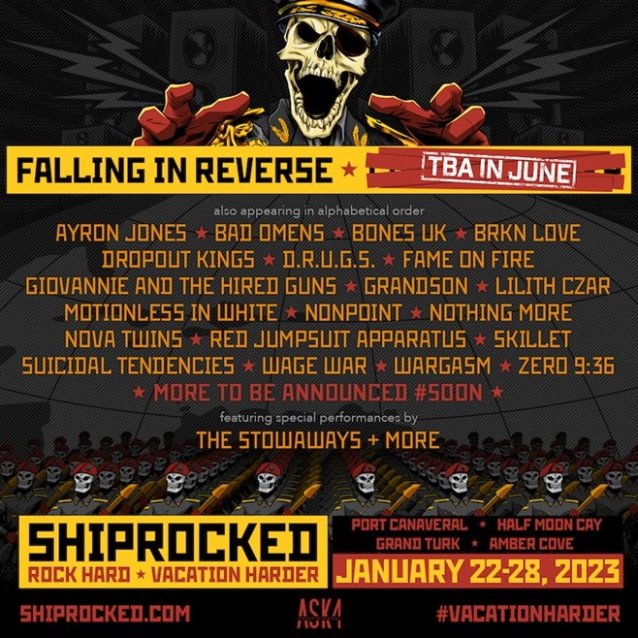 After making its triumphant return to the seas in 2022, ShipRocked — the ultimate rock music cruise vacation — expands to six days for its 13th sailing from January 22-28, 2023. FALLING IN REVERSE tops the bill for ShipRocked 2023 — joined by a co-headliner to be announced in early June — plus NOTHING MORE, SKILLET, SUICIDAL TENDENCIES, MOTIONLESS IN WHITE, GRANDSON, AYRON JONES and over a dozen others, including the return of ShipRocked‘s resident all-star band THE STOWAWAYS. Also on the Carnival Magic’s initial manifest for the January 22-28, 2023 sailing are BAD OMENS, BONES UK, BRKN LOVE, D.R.U.G.S., DROPOUT KINGS, FAME ON FIRE, GIOVANNIE AND THE HIRED GUNS, LILITH CZAR, NONPOINT, NOVA TWINS, RED JUMPSUIT APPARATUS, WAGE WAR, WARGASM and ZERO 9:36, with more to be announced. Look for THE STOWAWAYS‘ 2023 roster to be announced soon.

ShipRocked 2023 departs from Port Canaveral, Florida with stops at Half Moon Cay in The Bahamas, Grand Turk in Turks & Caicos Islands, and Dominican Republic’s Amber Cove. A very limited number of staterooms are still available at ShipRocked.com and a waitlist option will be offered once the cruise is sold out.

Jonny Hawkins of NOTHING MORE said: “We’re really stoked to get back on ShipRocked and see everyone. We’re going to have a new album out by the time this rolls around. Can’t wait to play it for everyone. Let’s do this!”

SKILLET said: “We are thrilled to be playing ShipRocked next year! Can’t wait to take a cruise with our fans and rock out at sea!”

ShipRocked producer and creator Alan Koenig of ASK4 Entertainment said: “Announcing the ShipRocked lineup is like Christmas morning, every year! Everyone likes to open their packages and get just what they asked for, so we try our best to book as many of the artists that we know our guests have on their wish lists — but also give them something they weren’t expecting that we know they’ll love. FALLING IN REVERSE and their co-headliner, who we’ll announce in early June, have been heavily requested for a number of years, and we couldn’t be more excited for them to make their ShipRocked debuts in January. In addition to the ‘big gifts’ we’ve got a number of amazing presents and stocking stuffers for our SR23 kids to enjoy, including several fan faves and some incredible up-and coming-artists. It’s gonna be a very Merry ShipRocked!”

A floating music festival, a rock and roll summer camp held in the dead of winter, a family reunion for the growing number of ShipRockers who have forged lifelong relationships out of a shared passion for music (and an occasional bucket of beer),ShipRocked is the premier rock music vacation, offering dozens of performances and unique collaborations, artist-hosted events and activities, theme nights, and ample opportunity for fans and bands alike to unwind and create new friendships in tropical paradise.

ShipRocked 2022 featured performances from over 20 artists, including LAMB OF GOD and Corey Taylor, plus STEEL PANTHER, BADFLOWER, AVATAR, P.O.D., 10 YEARS, NONPOINT, DROWNING POOL, DEAD SARA, ESCAPE THE FATE, AYRON JONES, GOODBYE JUNE and more, as well as artist-hosted events and activities at sea and on the beaches of Playa Mia in Cozumel, Mexico.

The annual ShipRocked Cancer Sucks Charity Auction, hosted by LAMB OF GOD‘s Art Cruz and BUTCHER BABIES‘ Heidi Shepherd, raised nearly $70,000, bringing the all-time total to more than $800,000 raised for cancer research. Two lucky guests even joined Art Cruz for an onstage photo during LAMB OF GOD‘s closing night set after outbidding others for the opportunity, which was paired with a LAMB OF GOD drumhead and more.

Throughout the year, ShipRocked‘s community of “ShipRockers” — as well as others from around the world — are staying connected via “Making Waves – The ShipRocked Podcast”, which launched in 2020 and is available for free through iTunes, Spotify and Google Podcasts. “Making Waves” features interviews with ShipRocked alumni artists, as well as other top music artists, actors and entertainment industry experts. It’s distributed via Sound Talent Media / Evergreen Podcasts and is hosted by Chad Nicefield and Justin Press.