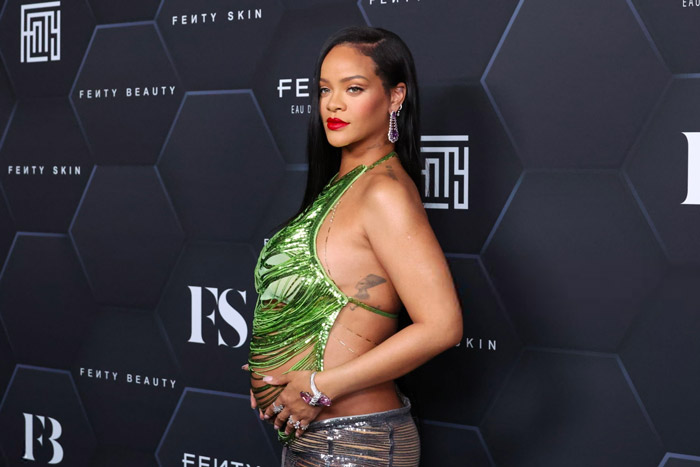 Rihanna is back on the cover of Vogue.

The pop icon graces the fashion magazine for the seventh time, but for the first time as a pregnant woman. The mom-to-be, who is expecting her first child with A$AP Rocky, flaunts her maternity style–from a Jean Paul Gaultier Haute Couture gown to Savage X Fenty briefs–while posing in a suite at The Ritz in Paris.

In addition to discussing her cravings (chocolate-​covered donuts and tangerines sprinkled with salt), she opens up about motherhood (“I’m excited by the challenge and accepting of it”), embracing her maternity style, and even–gasp!–music.

“When I found out I was pregnant, I thought to myself, There’s no way I’m going to go shopping in no maternity aisle,” Rihanna says. “I’m sorry–it’s too much fun to get dressed up. I’m not going to let that part disappear because my body is changing.”

She also responds to critics who think she’s wearing too little. “I’m hoping that we were able to redefine what’s considered ‘decent’ for pregnant women,” she says. “My body is doing incredible things right now, and I’m not going to be ashamed of that. This time should feel celebratory. Because why should you be hiding your pregnancy?”

The 34-year-old is excited about starting a family. “I’m looking forward to being a teacher, but more so a student,” she says. “Because I think I’m going to learn more from my kid than I could ever teach them.”

At one point, the conversation turned to her relationship with A$AP Rocky. “People don’t get out of the friend zone very easily with me,” she says. “And I certainly took a while to get over how much I know him and how much he knows me, because we also know how much trouble we can land each other in.”

Rihanna reflected on her performance of “Cockiness” with Rocky at the 2012 VMAs, where he pulled a fast one. “He grabbed my ass on stage. That was not part of the rehearsal!” she recalls. “I was like, What are you doing!?”

But while her team thought she would be upset, she let it slide. “My manager was like, Oh, God, she must like this guy a little bit. She never lets this shit slide.”

Their relationship became serious during the COVID lockdown in the summer of 2020 when they took a road trip together from Los Angeles to New York. “He became my family in that time,” she says.

Rihanna would cook on a “janky grill” she bought from Walmart while Rocky tie-dyed T-shirts he got from the gas station. “I love the simple things but also the grand adventures,” she says. “There’s no pretentious my-brand-your-brand bullshit, it’s just us living. I just feel like I can do any part of life by his side.”

She brought Rocky home to her family for the holidays that year and her mom warmed right up to him. “My mother has a really good read on people. She observes first and then she’ll move slowly. I guess I’m like that too,” she says. “There are some guys that I’ve dated that she won’t even look at to this day. But she was charmed by him from the jump.”

While they weren’t “planning” for a child, they also weren’t against it. “I don’t know when I ovulate or any of that type of shit. We just had fun,” she says. “And then it was just there on the test. I didn’t waste any time. I called him inside and showed him. Then I was in the doctor’s office the next morning and our journey began.”

As she gets ready for the biggest chapter of her personal life, she hasn’t forgotten about music. It’s been six years since she released her last album, Anti (“My best album to this day”), but she knows how she wants to approach the long-awaited follow-up.

“I’m looking at my next project completely differently from the way I had wanted to put it out before. I think this way suits me better, a lot better,” says Rihanna. “It’s authentic, it’ll be fun for me, and it takes a lot of the pressure off.”