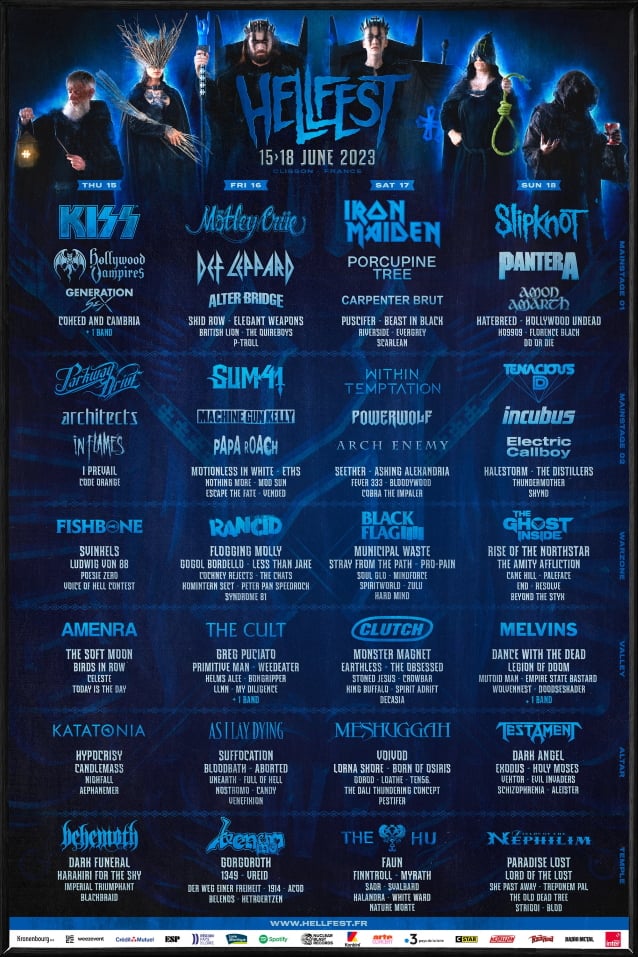 ELEGANT WEAPONS‘ debut album, “Horns For A Halo”, will arrive in the spring via Nuclear Blast Records. The LP was recorded with bassist Rex Brown (PANTERA, DOWN) and drummer Scott Travis (JUDAS PRIEST) and was helmed by acclaimed British producer Andy Sneap, who has previously worked with JUDAS PRIEST, ACCEPT, EXODUS and MEGADETH, among many others.

Regarding the ELEGANT WEAPONS band name, Faulkner said: “In almost any endeavor, the craftsman needs the right tools for the job. For a musician, those tools are things like their instruments, their voices and the emotions that the right combination of all those can bring to the surface. You can also consider it a reference to the instruments we play, because they’re almost antiquities now. So yes, it references our instruments and also this kind of music, where we’re carrying on the tradition of the greats like SABBATH and DIO but also bands the guys are connected to, like RAINBOW, PANTERA and PRIEST.”

Richie and Rex have been friends for years, so when Richie was recording “Horns For A Halo” during the pandemic, he called on his friend to record the bass for the album.

“Well, Rex brings a sound, first of all, that is like no other bass sound,” explained Richie. “The way he plays bass is instantly recognizable. But I got involved with Rex, you know, as with a lot of things that we do, as humans, really — we got involved as friends first. But Rex has got a great way of hearing the way the bass parts and the drums interact together. I mean, Rex‘s parts just breathe grit and life and dynamic into the songs. So it’s a pleasure to have him on the record and it’s a pleasure, obviously, to know him and have him as a friend — he’s a legend.”

As for Travis‘s involvement with the LP, Faulkner said: “I always wanted to make a record with Scott playing on it outside of PRIEST. His technique and style are legendary but also his groove.”

When it comes to the live show, there was no other bass player even considered other than Rimmer. Davey and Richie go back over 20 years and they played the bars and pubs of London and England together, night in, night out for many years. Their musical relationship is almost telepathic in the way they communicate, from that early hard graft together on the circuit.

“Davey is an untouchable player,” Richie said. “In sound, style and presence. A killer writer too, contributing great songs with URIAH HEEP. A great friend and a great musician.”

When it came to choosing the drummer for the touring band, it was a no-brainer for Richie to enlist fellow Nashville resident and good friend Williams. Christopher had played and recorded the initial demos for the “Horns For A Halo” album, and was the obvious choice for the drum position. A phenomenal player, a great personality and a consummate professional.

And finally there’s the new hotshot on the scene, Romero, Chilean-born, now living in Eastern Europe.

“Ronnie‘s got that heritage,” says Richie, “and he nailed his parts in a week, which was a testament, really, to how good the guy is and how perfect he was for it. And he’s just such a lovely guy, and, I think, one of a dying breed. There’s not many people like him. There’s good singers, like [Rob] Halford and [Ronnie James] Dio, but there’s not many of them. He’s really something special. When he sings with RAINBOW, he sounds obviously like Dio, but when he sings this stuff, there’s something in there that comes out of him — he’s his own monster, with his own trademark quality, which is an important thing to have.”

Producing is PRIEST‘s touring guitarist of the past five years Sneap, who has been respectful of Richie‘s vision concerning a certain classic sound he wanted across the expanse of the record’s 11 songs (ten originals plus a cover of UFO‘s “Lights Out”),and that is a signature Flying V through a Marshall Plexi amp.

“With the Marshall Plexi I’ve kind of gone back to the ‘70s, really,” figured Faulkner. “And, you know, it’s just one channel. And I’ve been using a prototype Flying V by Gibson, a blue Flying V with signature pickups, which I had been using on the PRIEST tour. I used it on the whole record, every track. So it’s pretty straightforward technology-wise — the Flying V through a Marshall on 11.”

As for the music, Richie described it as “a mix of Jimi Hendrix, PRIEST, SABBATH, solo Ozzy and BLACK LABEL SOCIETY, but with a lot of melody, sort of old school and modern at once if that makes any sense, and actually down-tuned a whole step. The Marshall Plexi basically does one thing, but you’ve got to crank it to 11 for it to have that distorted sound. It hasn’t got a lot of bells and whistles on it or different channels and effects. It basically does one thing and does it very well. But again down-tuning creates more of a modern sound, and by using the classic sound of the Marshall Plexi, you get that juxtaposition, that contrast. All told, there are a lot of guitar solos and the songs are on the heavier side. And even though there’s a lot of melody, it’s still going to shake your bones.”

Specific to the songs, Richie explained that, “Me and acoustic don’t really get along, so there’s only one mellow song on it, a sort of smoky, haunted, New Orleans kind of tune called ‘Ghost Of You’, with de-tuned 1920s piano on it. That one is about a memory, or ghost of a lost love. But that’s about as acoustic as it gets. I’m not really attracted to acoustic guitar in general. It’s mainly kind of heavy and full-on, really. There’s a song called ‘White Horse’, plus ‘Horns For A Halo’, which is like Tony Iommi crossed with ALICE IN CHAINS. That’s about the way we justify the bad things we do. When we turn up on Judgement Day, will the angels kind of confuse our horns for halos, if you know what I mean. Then there’s ‘Rose Girl’, which has a bit of a psychedelic ’60s hippie vibe. It’s about the rose girl who sells roses to the patrons at a strip club, and reflecting on what her life is all about.”

Besides having these stories told, another mandate of the band is for Richie to propose more fully than he can across a PRIEST record, his own voice or style as it pertains to the guitar.

“Yes, everything that you do, without sounding pretentious, is trying to find your own voice and extension of your voice,” he said. “I’ve been in cover bands all my life. Then you find yourself replacing K.K. Downing and it’s, like, ‘Now what am I gonna say?’ I can’t sound like K.K. Downing. I can’t sound like Eddie Van Halen. I can’t sound like Zakk Wylde. So it’s refining and honing what your voice is, constantly fine-tuning what that voice is. And hopefully when people listen to it, they’ll think, ‘Oh, that’s Richie.’ In every song and every solo hopefully there’s that sound, that narrative, that voice, and hopefully it stands the test of time.”

But really, the over-arching mandate with ELEGANT WEAPONS is to perpetuate the rich legacy of the traditional proto-power metal invented by the heavy metal titans of the ’70s and ’80s, most pertinently JUDAS PRIEST.

“All four of us have got that original DNA in us, as does the new breed of traditional heavy metal fans,” Richie said. “And so maybe a band like ELEGANT WEAPONS, hopefully we’ve got the credibility to make those original bands proud, because we were accepted by the members of those bands and by their fans. That’s really the idea behind ELEGANT WEAPONS — to keep flying the flag for this style of timeless heavy metal.” 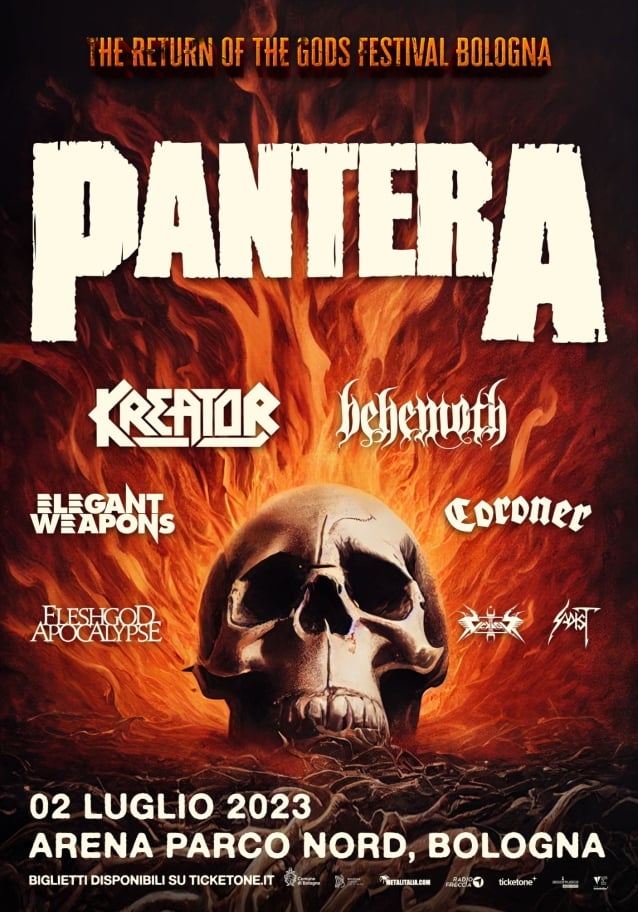