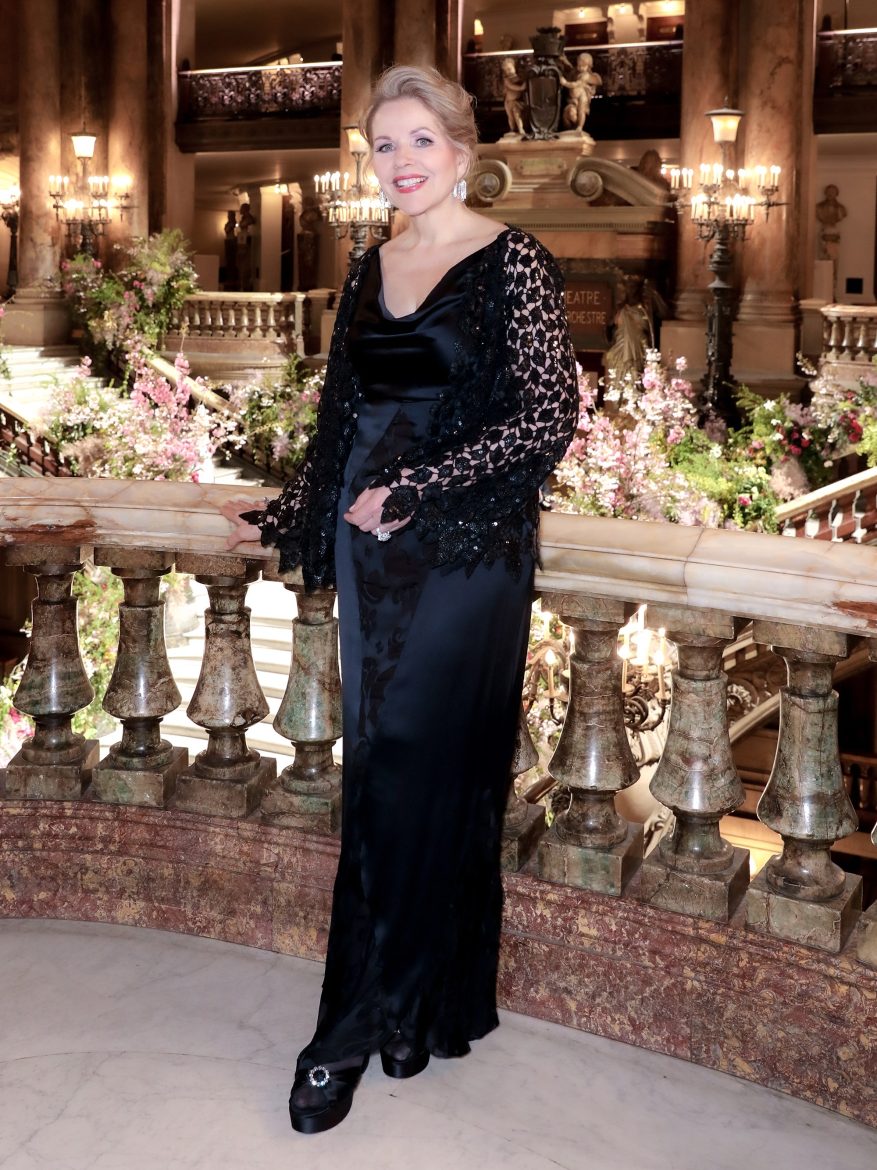 For those present last night, ascending the grand staircase of the Palais Garnier felt a bit like entering the gates of heaven. Elegant attendees of all sorts, donned poufed hair, encased themselves in silks and tuxedos, and climbed the theater’s stories steps. All the while, excited chatter enveloped the room and camera flashes sprung in every peripheral. The reason for this endless well of sheer beauty and excitement? Renée Fleming would soon take center stage at Paris National Opera’s Spring Gala.

Organized by the Paris Opera’s in-house fundraising arm, Arop, the world-renowned soprano enchanted the eyes and ears of the evening’s guests with an original performance directed and conceptualized by Robert Carsen with musical direction by James Conlon and choreography by Nicolas Paul. When it’s mentioned that the performance was like none other, it’s true. For the benefit, Carsen pulled together a compilation of historic pieces that he felt best celebrated Fleming as a performer instead of opting in for a singular storyline. Alexander Balus (1784), Les Contes d’Hoffman (1880), and Rusalka (1901) were only but a few pieces performed throughout the evening.

“When Alexander Neef asked me to conceive this Gala for Renée Fleming with James Conlon and the Orchester de l’Opéra national de Paris, I could not have been happier because the productions we put together with Renée have been among the most memorable and rewarding for me,” Carsen wrote in the program.

But, the evening felt more than just an opera. Instead, it was a seemingly gorgeous marriage between multiple classical disciplines. Ballerinas Stephane Bullion and Hugo Marchand elegantly danced across the stage with Fleming; Anna Stephany sang alongside her; and Andrzej Filończyk and Lambert Wilson’s performances nearly left you broken-hearted. So too did violinist Renaud Capuçon’s dramatic performance ofThais (1893).

And let’s not forget the fashion elements of the performance. Melodrama and glamour manifested into one as Fleming donned two exquisite gowns crafted by Chanel. The first was an ethereal dress, which appeared to be silk organza. The second was a deep red silk gown further illuminated by the diamonds adorning her earlobes and neck. “Chanel came to my home before the performance to make sure the looks were perfect,” Fleming told Vogue. “Each is absolutely divine, and performing in them was nothing short of magical.”

Sometime during the dinner, honorary thank yous and closing remarks were broadcasted over a microphone. Thunderous applause echoed throughout and was seemingly everlasting, which felt like a classic performance all on its own.

The combination of highly skilled voices, musicians, and dancers made it feel like one of those rare performances that one only comes across a few times in their lifetime; the ones that make viewers stop in self-reflection and reveal deeper emotions that were perhaps unknown to one before.