Welcome back to our series Rembert Explains. Every so often, 28-year-old Rembert Browne will watch a video from the past. Rembert will write down his thoughts as he’s watching the video, then we’ll post those thoughts here. This week is the final installment, selected by Rembert Browne: “Unleash the Dragon” by Sisqo, from the year 1999. If you have an idea for a future episode of Rembert Explains, it is unfortunately too late.

(This is not the first time I’ve written about this video on Grantland. In one of the early YouTube Hall of Fame posts [date: October 26, 2011], this was my blurb pick for “The Worst Music Videos of All Time.” Feels right to go long on it, four full years later.)

0:02 This video is already more expensive than it should be. Two seconds in, there has already been the sound of a helicopter, an aerial shot, and an actual crowd.

0:08 Why did all of these people show up for this video? I’ve never seen so many people make such a bad decision at the same time.

0:11 It’s so upsetting that instead of just doing a music video they tried to make this into a “movie.” This is what happens when you have the “Thong Song” and then get the green light to release more singles that were never supposed to be singles. Releasing “Unleash the Dragon” after “Thong Song” is like getting good at football and then just assuming you’d automatically be good at poetry.

0:19 Yes, this is a barricade and news crew, for Sisqo. A LOCAL NEWS CREW.

I want to be very clear about something: I love Sisqo. He was the lead singer of one of the most underrated R&B groups of all time, Dru Hill. Every time I watch the video to “5 Steps,” I cry, especially when THAT DOVE COMES OUT AT THE END AND THEN SISQO KNEELS — LORD LORD LORD.

But this song is inexcusable. And this video absolutely takes it over the top, in the sense that maybe he (and everyone involved) should have gone to prison as soon as it was finished.

0:25 People really brought flags to this Sisqo block party like it was Glastonbury. Unreal.

0:27 I haven’t seen this video in years, so there are going to be quite a few Sisqo realities that I forgot existed. Like the chain. 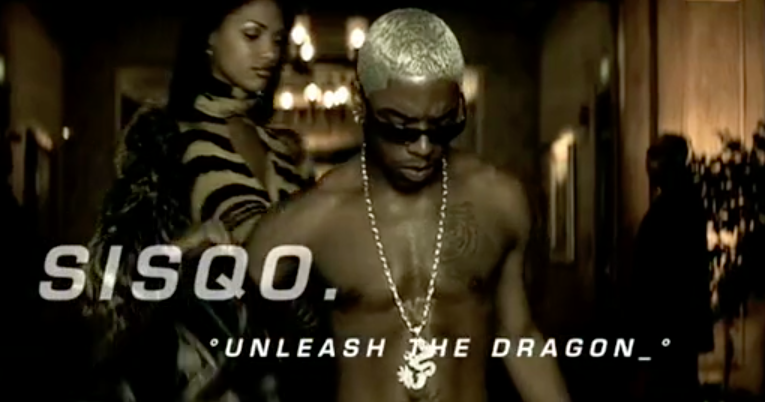 Also, WHY THE UNDERSCORE AFTER “DRAGON”? I’m already getting pissed off.

0:28 Just as a reminder, it’s almost been half a minute and there has not been any music. Also, why are human beings helping Sisqo put on his jackets like he’s Jed Bartlet or something?

0:29 Imagine being the recipient of sunglasses from Sisqo and him not even looking at you. Just absolutely disrespectful.

0:37 Sisqo finally sang something — “the dragon” — in Sisqovoce. Also, he spun a microphone around his finger, which I can’t make a GIF of because it’ll give me a computer virus.

0:38 It’s at this point in music history that Sisqo begins one of our biggest buildups and then immediately lets down humanity like we’ve rarely ever seen. He hits us with the spoken word:

What I’m about to do

I’m sure nobody expected

But that’s what I do

I’m about to release the dragon

Nothing is funnier than this. I’m sorry. Nothing. I’ve never seen someone be less intimidating in their most intimidating life moment than what Sisqo does right here. He lost the battle before the minute mark, and there are still six more minutes.

One of the best parts is the crowd reaction. They love it. “GO SISQO WE LOVE YOU” they’re probably screaming as he berates them with HERE I COME / N​-​-​-​-S HOLD ME BACK.

1:02 I feel like this is definitely Ben Carson’s go-to song in karaoke.

1:03 He has more lyrics. And not a single one should be overlooked.

Tired of holdin’ back

I’m about to let the drag’ attack

It’s too much. Fun fact: The “Unleash the Dragon” video is the prequel to Red Tails.

1:10 One of the notes I made in that 2011 blurb about “Unleash the Dragon” was about the probable plan leading up to writing the lyrics: “Sisqo should say the N-word more than 70 times.” Through 70 seconds, he’s very much on pace:

And wouldn’t you know it, the crowd loves it. But it’s almost as if he wants the crowd to take him more seriously, but they’re not — PERHAPS CAUSING ANGER THAT MIGHT, IN TURN, CAUSE HIM TO UNLEASH THE DRAGON.

1:11 In case anyone was wondering what record label Sisqo was on at the time:

Yep, the answer is, in fact, Def Soul.

1:16 Sisqo has made it to the chorus, but he’s still so serious. And he’s on his balcony, with his Red Tails dancers, singing and dancing, begging the crowd to take him seriously. But they won’t; the crowd is just smiling and cheering from below. He’s assuring them, “Y’all n​-​-​-​-s gon’ make me / unleash the dragon.” But they’re not listening. Then he’s all, “I know you don’t really wanna / unleash the dragon.” But still, they’re just so gleeful, happy to be at a Sisqo concert. But what they don’t know — a fact that Sisqo clearly knows — is that this is bigger than any normal concert. The stakes are at an all-time high.

1:18 The ground begins to shake, causing everyone to become a very bad actor.

1:28 The sudden quakes are getting so bad that Sisqo stops singing. Not dancing, however, as he and the Red Tails would never slow down. No one can really know, but I feel as if the seismic disturbances are slightly connected to this dragon Sisqo keeps talking about.

1:47 Around this point of the song/video, it gets unnecessarily bad. It’s the point when the video fully takes over the song; the commotion of the scene is three times louder than the lyrics and the music, which is enhanced only because Sisqo is barely singing anymore — since, you know, this video is real and all.

1:56 This is so bad. Sisqo goes three seconds without singing, and then just screams “OH NA NA NA.” How did this happen. How the hell did this happen?

This could be bad. Also, most of the crowd has been launched to the ground by what the newscaster with the slicked-back hair is calling “an earthquake.” But I have a feeling Sisqo is the only one who’s thinking, Wait, this might not be an earthquake, in which case I really might have to unleash the dragon.

THAT’S A DRAGON, LADIES AND GENTS.

3:12 The only thing more puzzling than a dragon?

Tatyana Ali. Don’t try to make sense of it. Just accept what has happened. Tatyana Ali is about to be the damsel in distress for Dragon Sisqo in this seven-minute movie that could have been a Vine.

3:26 Oh, hi, Sisqo, how nice of you to join us in your own music video — NOW MIGHT BE A NICE TIME TO UNLEASH THE DRAGON, BRUH.

3:40 What happens after Sisqo sees Tatyana down by the dragon is the dumbest thing I’ve ever seen. First, Sisqo yells “HEY!” at the dragon as if he’s in Newsies and it’s like c’mon, son.

After this dragon-unleash of a scare tactic, the dragon looks right at him and Sisqo says, “What do you think you’re doing, scaring people, stepping on cars?”

The dragon breaths on him, launching Sisqo back to the doorway, and then out of nowhere the music starts again and he just sings “OH NA NA NA.” It’s almost as if this were done in one take, no script, and everyone had just been molly-waterboarded.

3:46 “I know you don’t really wanna” —Sisqo, covered in dragon saliva, to the dragon.

4:11 This dragon, obviously very post-Sisqo, begins to start swinging at him, like the gnat that he is. Luckily for Sisqo, he is really good at front flips.

4:41 The next 30 seconds are really dark, even by “Unleash the Dragon” standards. After all of this, they had the nerve to unleash two rap verses by two rappers whom I refuse to look up, both of whom are wearing snakeskin outfits wrapped in turkey bacon. 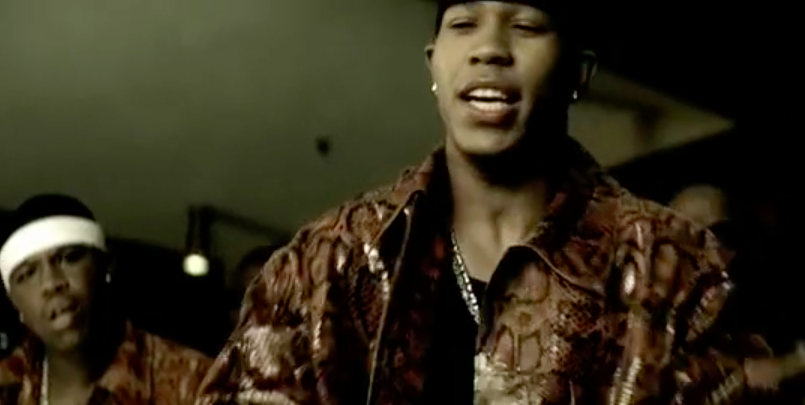 And for those of you who are concerned with the dragon-tearing-up-the-city plot, yes, this verse is taking place in a room that the dragon just destroyed. And no, they are not concerned for their safety, because the room assuredly has Cristal.

5:00 Here is your five-minutes-in Sisqo-in–The Matrix update, for anyone still sick enough to be reading this:

This is also the moment when I realize this is the greatest video of its time. It’s like seven different nightmares stitched together, brought to you by the infinite budgets of the late ’90s.

5:20 Sisqo’s doing flips and avoiding being killed by the dragon, but I also just remembered that Sisqo has that belly tattoo. Just didn’t want to leave that out.

Also, Sisqo is getting his little ASS kicked, but doing it in style.

First he does his heroic moves:

And then he puts on his shades (this time, on his own).

And then he runs under the dragon, causing it to fall in an alley, the end.

Yes, that’s how he defeats the dragon and saves the world. Like every first-level boss of a video game, he just confuses it and it dies. Wow, some dragon Sisqo has inside. Good thing he’s so clever when his black outfit turns red and he becomes the dragon, out-dragoning an actual dragon. Thank god for Sisqo.

6:33 What Sisqo does next … just sit down before you read the next line. It’s actually too much, the nerve he has at this moment.

There’s a little bit more in the video, but it’s mainly just Sisqo calling other dragons “n​-​-​-​-s.” I’m so glad this terrible song and this terrible video happened. Without it, a third of my lifetime tears never would have left my eyes. Thank you, Sisqo, for continuously carrying me to the gates of Valhalla every time I push play on this work of art.