Rapper DaBaby faces a criminal charge for allegedly assaulting a man who he said tried to stop his crew from making a music video on his property.

The singer is being charged with felony battery by the Los Angeles District Attorney’s Office over an incident while shooting his music video last December on Gary Pagar’s property, TMZ reports. Additionally, an arrest warrant for DaBaby — whose legal name is Jonathan Kirk — has been issued, WCNC reports. The alleged attack left Pagar with serious injuries.

Pagar said he was told the team would be using his property as a vacation for DaBaby and his friends, having made clear the guest limit was no more than 12 people. Pagar filed a lawsuit in February claiming that he was attacked for attempting to enforce his property rental rules.

Pagar said he visited the property to find a group of more than 40 people filming with the crew and many others surrounding. When he tried to shut it down by going to DaBaby, the manager claimed he was attacked by someone in the crew and that when DaBaby ordered his crew member to back off, Pager got sucker-punched in the face, knocking out a tooth. Part of the attack was caught on video, which you can see above.

Another man involved, Thankgod Awute, is also being charged with felony robbery. 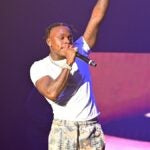 It’s been a rough couple of months for the North Carolina rapper. In February he was sued after he and his entourage were videotaped beating up the brother of his ex-girlfriend, singer DaniLeigh in a Los Angeles suburb bowling alley. DaBaby later said it was a matter of “self defense,” telling TMZ, “Shouldn’t run around threatening people.”

And earlier this month, Rolling Stone obtained never-before-seen security footage that put into question his claim of self-defense when he shot and killed Jaylin Craig in a North Carolina Walmart in 2018. 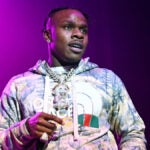