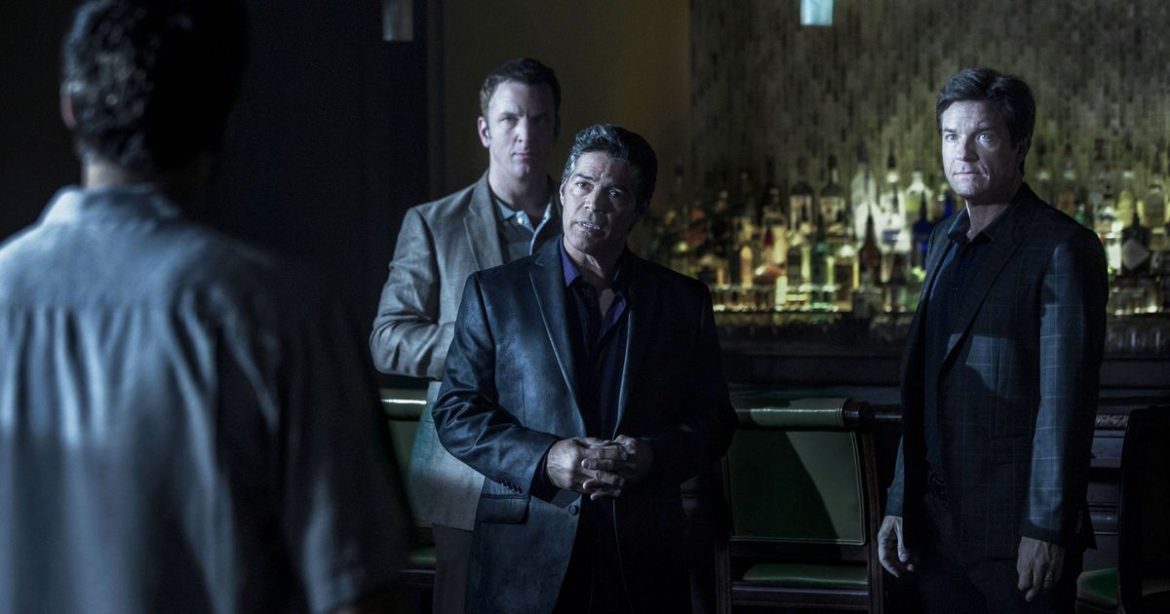 The eighth episode of the first season of Ozark is one of its most ambitious and yet also its least effective. Taking a break for a chapter that unfolds entirely in flashback is an interesting choice with so much building tension on the show. Still, it’s a poorly constructed hour, jumping around in time within its flashback in a way that ultimately feels manipulative. Still, it does build on an interesting theme within the show about how decisions ripple out across the country. The choices made in 2007 will lead to the loss of life ten years later in the heart of the Ozarks in ways that no one could have ever predicted.

In fact, that’s what Marty Byrde, who looks much happier and healthier, is talking about in the opening scene. “Any decision, big or small, has an impact around the world,” he says, just before Marty and Wendy are hit by a car. The episode then jumps around in 2007 to tell several origin stories, including how Marty/Bruce got involved with Del and the drug cartel in the first place and how Agent Petty has a personal connection to stopping them. It turns out that Petty was trying to flip Del’s laundering operation before Bruce even got involved, pressuring a weasel named Louis (Ivan Martin) but not getting very far. When Louis is next seen on the links with Del, Marty, and Bruce, it’s clear how close the G-man has been this entire time, which justifies why he’s so obsessed a decade later.

Wendy is at a miserable job interview, being judged by someone younger and less qualified. But Wendy had to take some time off to start a family, so her finger is not “on the pulse” enough to run a campaign, even if she thinks this new network called Facebook is really going places. She won’t get the job, and much of the episode highlights Wendy’s depression in 2007, one of the reasons that Marty ends up taking the Del job — to bring a cash influx into their lives. Money can’t make you happy, but it makes some things easier, and it’s interesting that the writers are suggesting that if Wendy wasn’t dealing with depression, they might not be in the predicament they’re in ten years later.

As for Petty, he gets the most character development so far by introducing Barb Petty (Maryann Urbano), his addicted mother. At first, mom’s habit seems easy to dismiss, but Petty’s boyfriend sees the warning signs first. She seems a little “off.” If the writing of this episode was a little sharper, one could maybe draw a line between Wendy Byrde and Barb Petty — two figures whose struggles in 2007 will ripple all the way through to 2017.

And yet Marty, despite the opening scene, isn’t a big fan of using fate as an excuse. In a scene at the hospital after the accident, Bruce says, “Everything always happens for a reason.” Marty doesn’t believe in that. He believes people make decisions. It’s not some test from the universe. Does he still feel that way in 2017? Maybe. His last line is key to the Marty Byrde persona: “People make decisions — shit happens. You got to act accordingly.” Marty’s greatest skill is figuring out how to act accordingly in the heat of the moment.

The episode really jumps around in time here from a scene with Marty finding the kids on a trampoline, a chair overturned, and the sink running, with Wendy crying in bed. Jump to the Byrdes at a massive table with Del as Marty/Bruce are clearly being wooed into the operation. Jump again to one of the first meetings between Del and Marty/Bruce, wherein Marty found some made-up accounts in the portfolio. It’s either a test for potential money managers, or someone could be skimming off these accounts. Del says, “Would you like to work together?” Either way, Marty passed the test. But Byrde is nervous. He doesn’t know Del’s “affiliations,” and Bruce insists it’s safe, although it feels like Bruce is covering a bit and probably has the same suspicions, just a different moral threshold.

After a few other quick beats, the episode settles back in with Del and Marty discussing business over cognac. Wendy was talking about the accident to Del’s partner, further cementing the idea that the random car crash led to everything happening a decade later. (A later scene makes it even clearer in that the trip they’re on here likely wouldn’t have been taken if Wendy wasn’t depressed.) Del reveals that he has a powerful boss and says that Marty probably knows that already. Del likes that Marty is the only potential investor who spoke up. He’s not just brilliant, but he has integrity. And what does Marty say trumps everything? “To protect and provide for my family.” That is the theme of Ozark from the first episode to last — what Wendy and Marty Byrde are willing to do to protect their family. Del promises to protect Marty. He will break that promise. The big revelation here is that Del didn’t want Bruce involved from the very beginning, and it’s Marty’s loyalty to his partner that helped seal his fate. If Marty had taken the job and pushed Bruce out? The Byrdes would still be in Chicago.

After being told that the war on drugs is basically over, Petty drops his mom off someplace that looks shady. It’s clearly a dealer’s house, and Petty breaks down the door to find Barb with a needle about to go into her arm, leading to a fight. It’s no wonder that Petty is willing to do anything to get his job done.

The final scenes reveal the life and death stakes of all of this, starting with Wendy being pregnant during the accident that opened the episode, cycling back to the theme of fate. And then Louis gets fired in front of Marty and Bruce. Del says that Louis cheats on everything, including golf and his wife, and they think he’s working with the feds. And the schlub is killed right there in front of Marty and Bruce. They even cut out his eyes, saving them “for a rainy day.”

• “I know cartels. I’ve seen Traffic” is Bruce’s best line, spoken just before getting excited about a Bloody Mary bar. Marty really should have known this guy was going to be a problem.

• At one point, Marty says, “I’ll give him my best Bartleby impersonation,” which is a reference to the wonderful short story “Bartleby, the Scrivener” by Herman Melville, in which a clerk answers all queries and instructions with “I would prefer not to.” You should read it.

• The episode opens with arguably its best scene, in which Marty details major events from history impacted by one decision, like Hitler taking too many sedatives before D-Day and the fact that Buddy Holly died in a plane crash because he wanted to get somewhere quickly. Read more about The Day the Music Died in this great Rolling Stone piece.