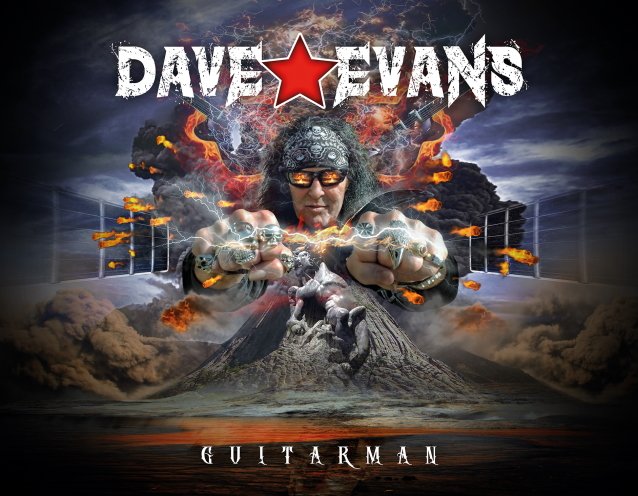 Last fall, original AC/DC singer Dave Evans recorded two new songs with legendary producer Flemming Rasmussen, best known for having been helmed three of METALLICA‘s early albums, plus winning a Grammy for his work on METALLICA‘s “One” in 1989. One of the tracks, “Guitarman”, was written by Danish musician and composer Nicolas Robinson of THE UNIVERZALS, while the second track is a cover of an Elvis Presley classic that Evans had previously performed with AC/DC.

Dave recorded AC/DC‘s first two singles, “Can I Sit Next To You Girl” and “Baby, Please Don’t Go”. But in October 1974, less than a year after AC/DC‘s first gig, Evans was out of the band. He was replaced by Bon Scott, who sang on AC/DC‘s first six studio albums and became a legend himself after his death in 1980.

In a 2021 interview with DJ Grant from New Zealand’s Galaxy 107 FM, Evans said about being replaced by Scott: “You’ve gotta remember that Bon Scott did a lot of the songs that I already did, like ‘Baby, Please Don’t Go’, we already did that. That’s the song that I got Angus [Young, AC/DC guitarist] up on my shoulders, and, of course, he used to watch us doing our show, so he copied that. I understand that he copied what I was doing. And the songs too, and re-recorded them and re-wrote the lyrics to some of the songs that I had already put down. But he was told to do that. I know that he was under instructions to do this, so I don’t really hold it against Bon Scott for that, because when he joined the band, he was washed up at the time, and he got a great chance to do something, and he did too. He did a great job, but his lifestyle just let him down.”

Last year, Dave was asked in an interview with The Rocker Diaries if he thought “that would be it” for AC/DC after Bon‘s death in 1980. He responded: “No, not at all. I mean, we all keep going. And AC/DC has had that many players through [the history of] the band. I don’t know how many. 20? And three singers, plus a stand-in singer as well.

“We were always ambitious when we first started,” he continued. “We always wanted to be the best in the world — all of us. And after me, Bon Scott got his chance. He did great with the band. And when he died, I just thought, ‘Who are they gonna get?’ I never thought [I would be approached about it] myself, because that’s water under the bridge. And I was busy with bands as well at the time, and doing my own music and recording. I was just wondering who it would be. I had heard of [Brian Johnson‘s pre-AC/DC band] GEORDIE — just the name GEORDIE. I’d never heard of Brian. And then Brian popped up and, of course, the ‘Back In Black’ album came out, which was a massive album around the world, and they were off and running with Brian. But if Brian quit, they’d get another singer, and another singer. [They’ve gone through] different bass players [and] different drummers.

“The drive was always Malcolm Young,” Dave added. “I remember Malcolm when I first met him. He was such a driving force. Just a tiny little guy — just a little touch over five foot tall — but, boy, he had a big heart and a big personality. And he was tough, too — Malcolm was very tough. And no matter what, he was AC/DC through and through. And, of course, once he passed away, which is very sad, AC/DC, of course, will never, ever be the same without Malcolm. How can it be?”

In May 2021, Evans released a new compilation album called “BADASS Greatest Hits”. The effort contains “20 massive hits on one album,” including Dave‘s version of “Rockin’ In The Parlour”, the song that originally appeared as the B-side of the “Can I Sit Next to You Girl” single.