With its adorable Familiars, quirky Higgledies and Ghibli-esque atmosphere throughout the whole game, Ni no Kuni: Cross Worlds is a breath of fresh air. The opening sequence alone will instantly transport you into this vibrant world of fantasy and wonder, thanks in large part to its intensive story and wonderful background music which includes music composed by Hisasishi. Gorgeous visuals and iconic art aside, the mobile RPG also boasts deep character progression and an engaging narrative as expected from the popular franchise – and it doesn’t stop there.

More often than not, games that focus too much on the visuals and aesthetics unfortunately have the tendency to let the narrative fall by the wayside – but with Ni no Kuni: Cross Worlds, the story takes centre stage as it should. Right from the get-go, you’ll be thrust into the shoes of a so-called “player” participating in a beta test of a fictional game called Soul Diver, which lets you travel to the world of Ni no Kuni in a fictional body (which is pretty meta, by the way). Things immediately go wrong as a glitch takes you to a burning kingdom under siege, and after you help save the Queen, you’re once again teleported to a different land with an all-too-energetic companion named Kluu.

This exhilarating intro is how your adventure begins, and the first stop is Evermore – something that immediately brings back fond memories of Ni no Kuni II: Revenant Kingdom. From there, it’s a series of quests that involve everything from defending the King of Evermore to picking up random errands for townsfolk to increase your Reputation, and it’s a fitting tribute to all the elements of old-school RPGs that fans of the genre know and love.

Spending way too much time on the menu

Of course, given that the game features deep character progression from simple level-up items to polishing gear and collecting Familiars, you’ll no doubt spend a huge chunk of time just tinkering around with items on the menu – which is a joy to do, to be honest. Netmarble’s style of letting you auto-navigate to waypoints during quests (and auto-battling, if you wish) gives you ample time to explore the expansive menu items while a quest is ongoing. You can buff up your stats with tons of materials, as well as try your luck in the gacha pool to see if the RNG gods are in your favour.

Speaking of summons, you can also collect fun Familiars that can accompany you on your journey. Each one features a variety of star ratings as well as both passive and active skills. Plus, the actual Familiars follow you around while you’re navigating the world around you, so picking the best one isn’t just a matter of how useful their skills are during combat – you’ll also make the difficult decision of choosing which one looks the cutest. 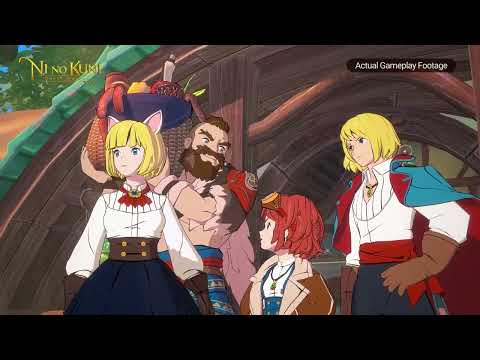 As for the combat of Ni no Kuni: Cross Worlds, you’ll have a variety of skills you can equip and level up at your disposal, as well as weapons with different elemental attributes. Choosing the weapon with an elemental advantage over the enemy can turn the tide greatly in your favour during combat, and you can switch between them on the fly to keep each fight fast-paced and strategic.

While you can set your battles to Auto mode, you can also get as involved as you want to be by manually controlling your characters in battle. This can come in handy particularly when you need to evade incoming enemy fire moments before your foes launch their attacks, as you can dodge and jump to safety when it truly counts. Combat styles will also depend on the character class you pick at the very beginning of the game – Destroyer, Engineer, Rogue, Swordsman and Witch – who each have their own strengths and weaknesses based on their character stats and fighting style.

Playing the game for a week definitely isn’t enough to enjoy everything the game has to offer, as each menu feature can only be unlocked when a certain character level is reached. Focusing solely on accepting quests from NPCs or simply roaming around aimlessly might boost your level, but that also means you’re barely scratching the surface of the deep narrative. You can also build your own community in the Kingdom feature or play with other users in different multiplayer modes.

That said, Ni no Kuni: Cross Worlds isn’t a game you can simply rush through – and why would you? With the meticulously crafted cut scenes, top-notch voice acting, action-packed combat and magical story, you’ll have to immerse yourself into the title for hours on end – and it might just be worth every second.

If you’re keen on giving the game a go, Ni no Kuni: Cross Worlds will be available to download globally on the iOS App Store and on the Google Play Store for Android devices on May 25th. It’s a free-to-play game with in-app purchases.