MY CHEMICAL ROMANCE launched its U.K. tour last night (Monday, May 16) at Cornwall’s Eden Project. The band opened its first U.K. show in over a decade with new single “The Foundations Of Decay” and performed a number of other anthems, including “Helena”, “Famous Last Words”, “Thank You For The Venom”, “Teenagers”, “Welcome To The Black Parade” and “I’m Not Okay (I Promise)”.

“This is a really special and amazing night for us,” frontman Gerard Way told the audience at the conclusion of the show. “I hope it was for you too.”

The setlist was as follows:

MY CHEMICAL ROMANCE broke up in 2013, three years after the release of its fourth studio album, “Danger Days: The True Lives Of The Fabulous Killjoys”. A new song titled “Fake Your Death” arrived in 2014 as part of a greatest-hits compilation, “May Death Never Stop You”. Since then, Way released his debut solo album, 2014’s “Hesitant Alien”, and several standalone singles. He also saw his award-winning comic book “The Umbrella Academy” adapted into a Netflix series.

Reunion rumors first arose in 2016, when the group posted a cryptic video on social media. It turned out to be for a 10th anniversary reissue of the band’s 2006 album “The Black Parade”. The band stated at the time, “We are not touring and there is no reunion planned.”

MY CHEMICAL ROMANCE played its first concert in seven years in December 2019 in Los Angeles.

A full-fledged tour, which has been postponed several times due to the coronavirus pandemic, will make its way to North America this summer, and dates in New Zealand and Australia will then follow in 2023.

The North American leg of MY CHEMICAL ROMANCE‘s tour will launch in August. 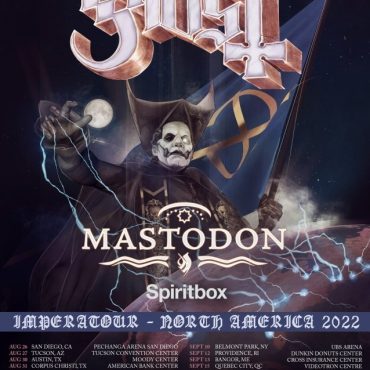 GHOST will once again bring the "euphoric spectacle" (Rolling Stone) of its live ritual to North America for the next leg of its globally dominating "Imperatour". The North American "Imperatour" will see the Grammy Award-winning Swedish theatrical rock band headlining 19 arenas across the U.S. and Canada (plus an appearance at Virginia's Blue Ridge Rock Fest),kicking off August 26 at San Diego's Pechanga Arena and running through September 23 at […]