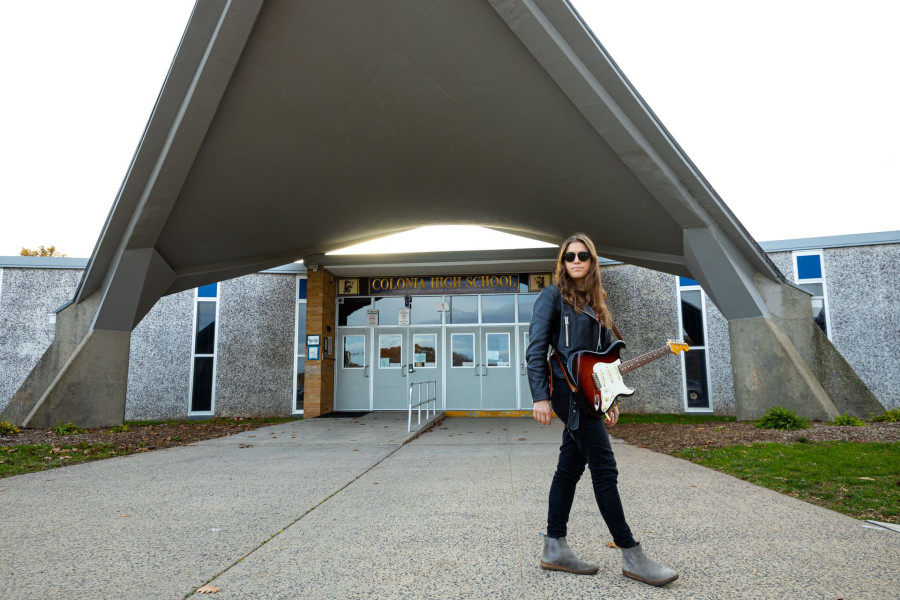 Talking about “Tobacco Leaves,” Emily shares, “I wrote this song while grieving. It was inspired by an anecdote a friend shared with me at my father’s funeral service. They told a coping mechanism they adopted after their father died, ‘I picked up smoking, don’t do that.’”

She goes on, adding, “In the immediate throes of grief, I felt like I barely knew myself. I can see how habits, uncharacteristic to a former version of yourself, can quickly coagulate. You wake up every day and are springboarded into existence and are simply trying to survive.”

“Tobacco Leaves” opens on low-slung emerging colors flowing into a heavy, measured rhythm topped by Emily’s evocative voice. Following a mist-filled bridge, the tempo quickens as Emily’s tones take on sumptuous, animated textures. The ebbing and rising passage of the tune infuses the song with touches of nostalgia and melancholy.

Beguiled by the redolent nuances of her voice, Guitar Girl Magazine spoke with Emily Gabriele to find out more about her songwriting process and her guitars.

Tell us about the inspiration behind your new music.

My album, ‘Omega Man,’ is an homage to my father who passed suddenly. At his funeral, I learned from one of his life-long friends that Omega Man was his nickname amongst his friends – he was viewed as a source of truth and ethics.

I worked with a local candlemaker to create a custom-scented Omega Man candle, as a piece of merchandise to complement the story behind the album. You can purchase one here.

What was the songwriting and recording process?

Every song I write has its own set of nuances when bringing it to life. I wrote “Talking to Strangers,” “No Mind,” and “Legs” before my father died. I wrote the rest of the album after he died. I wrote “Haunted” before the pandemic. I wrote “Tobacco Leaves” and “Integrity Man” during the pandemic. We define and keep track of life in relation to major life events – the death of my father and the pandemic serve as two of them that help me measure the timing of each of the songs on ‘Omega Man.’

Ultimately the writing process begins when I have an observation, a feeling, or a thought that I want to express. Songwriting for me is the most accessible way for me to express myself. The project ‘Omega Man’ was recorded in collaboration with Chris Clarke. We produced the entire record together. He’s based in the UK, so we spent a lot of time connecting via Zoom.

What do you hope your fans/listeners take away with them when they listen to your music?

I want listeners to feel a connection to my music. My hope is that my music brings comfort by means of a relatable message. I want to inspire others to find their outlet of expression and to articulate how they’re feeling. I want to provide insight into how I have felt, and what I’ve observed. Isn’t that the point of creating art?

When did you first pick up the guitar, and what drew you to that instrument?

I first picked up the guitar when I was around 15 years old. I distinctly remember going to my cousins’ house and tinkering with a classical guitar with nylon strings that was lying around. I left that day thinking, ‘gosh I really want one at my own house so I can continue to play around on it.’

When I was 10 years old, I was formally taught the alto saxophone. I think part of what drew me to the guitar was that I could sing and play the instrument at the same time. As opposed to the alto saxophone, where I was unable to do that.

Speaking of instruments, what brand(s) do you play and why?

I have a few different guitars. Most recently I’ve been playing an electric, American-made Fender Stratocaster. I appreciate the varied tones the Fender Strat produces. The acoustic guitar I play is a Taylor. I love the fullness of sound it creates.

Who are some of your musical influences?

My musical influences are vast and varied. The first few that come to mind are Alanis Morissette, The Beatles, Olivia Rodrigo, Sheryl Crow, Miley Cyrus, and Fleetwood Mac. Believe it or not, I actually would go so far as to mention Eminem as a musical influence of mine. The way he delivers his words and the depth of rhyme he includes in his lyrics inspire me.

Will you be touring in support of your new music?

I played a big album release show on Saturday, April 9 at the Bowery Electric in NYC. It was an opportunity to hear ‘Omega Man’ in a live format before the entire recorded project is made available.

As for upcoming shows, I have some shows in the works. The ones that are confirmed so far are on Thursday, June 16 at Heaven Can Wait in NYC, Friday, June 24 at Rubulad in Brooklyn,  and Wednesday, July 13 at Groove on Grove in Jersey City, right off of the Grove Street Path Station stop.