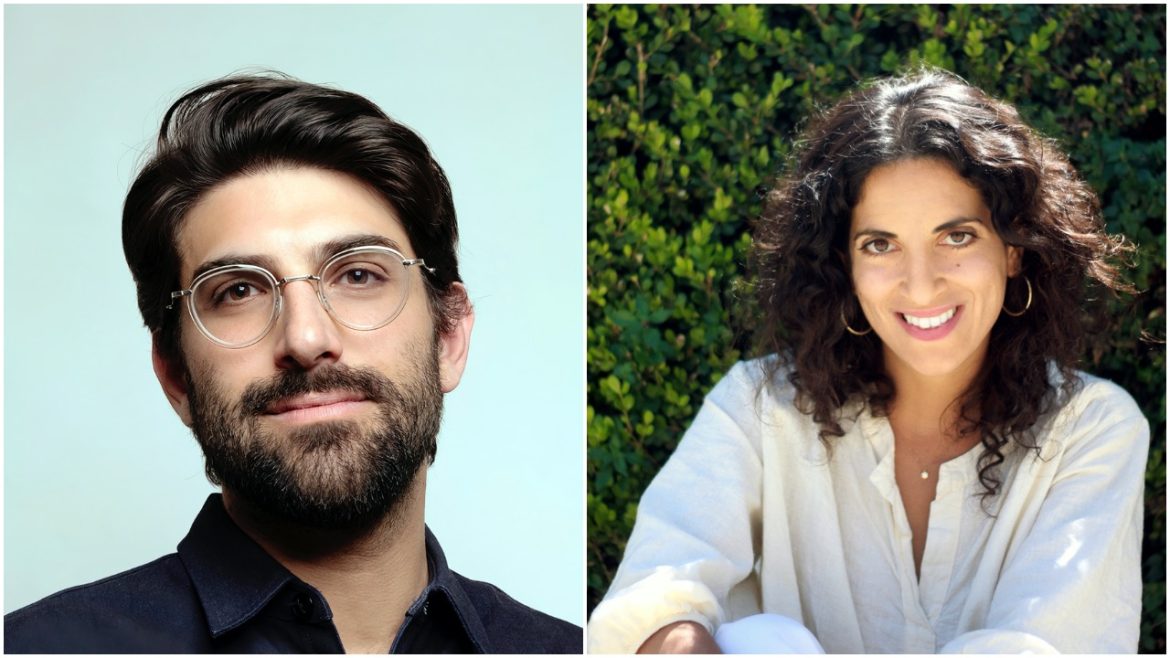 Capitol Records has named Targa Sahyoun and Nick Steinhardt to post as senior VPs of creative for the label, co-leading its creative development. Sahyoun will be in charge of the label’s music video and visual content production for the label’s full roster, while Steinhardt will oversee its art direction, both based in the Capitol Tower in L.A.

The move was announced Wednesday by Arjun Pulijal, the president of Capitol Label Group, who said, “I’ve been fortunate to work closely with Nick and Targa for many years, and I couldn’t be more thrilled that they are now co-heading Capitol Records’ Creative department. Visual creative is essential to the beating heart of every project — Nick and Targa are both artist-first creatives with experience and individual distinction that makes them uniquely poised to oversee the verticals that comprise a forward-thinking creative department.

Prior to being bumped up, Sahyoun served as Capitol’s SVP of video production. Among her credits since joining the label in 2014, she’s produced the Tribeca-premiering Mary J. Blige documentary “The London Sessions” and the Emmy-nominated special “An Evening of Nostalgia with Annie Lennox,” and has overseen music videos for Halsey, Katy Perry and others.

Steinhardt is new to Capitol, coming over from running   his own boutique creative design firm, 23in, and working at SMOG Design, a company owned by Jeri Heiden. His work had coincided with Capitol’s in working on art direction and design for Paul McCartney’s recent “McCartney III” and “III Imagined” albums and a number of Katy Perry projects, including her current Las Vegas residency. He’d also been involved with Tom Petty on projects from “Hypnotic Eye” up through the recent boxed set “Wildflowers and All The Rest.”

+ Warner Music Nashville announced Wednesday that it has completed its WEA radio team with the appointment of Brooke Meris as a regional manager. She’ll cover the West for the country music label group, joining Ray Mariner and Diane Monk, who cover the South and North. Meris will report to national director of radio Stephanie Hagerty and start work Monday.

“Brooke is highly respected by everyone in the industry, from radio to artists and managers,” said VP of radio Anna Cage. Meris most recently served as director of Southwest promotions at the Curb label, and previously had stints at Triple 8 Management and Columbia Nashville.

+ Fender has appointed Amani Duncan and Maria Fernandez to its Board of Directors. Both are seasoned music industry veterans. Duncan served as an executive at Def Jam Records, Island Def Jam, Virgin Records and Capitol Music Group before joining Sean Combs Enterprises/Bad Boy Entertainment in 2008 as CMO. From 2011 to 2017, she served as head of brand marketing for C.F. Martin Guitar, then joined MTV as head of music. Currently at advertising agency BBH USA, she serves as CEO leading creative marketing efforts for the Publicis company.

A native of Venezuela, Fernandez started her career at the Walt Disney Company as a Financial Analyst. In 2004, she joined DirecTV, followed by a stint at Probiz, after which she moved to Sony Music Entertainment where she currently serves as EVP of operations and COO.

As part of the deal, U.K. partners Dave Hallybone, Alex Hardee, Tom Schroeder and James Whitting have joined the Wasserman Music managing executive team. Since founding Coda Agency in 2002, the London-based partners have built Europe’s leading agency business for music talent. Coda partnered with Paradigm in 2014 and fully came under the Paradigm name in 2019. Ron Burkle’s Yucaipa was a minority partner in the company.

“I am incredibly proud to reunite Alex, Dave, James, Tom and their team with the full force of our Wasserman Music group,” said Casey Wasserman, chairman-CEO of Wasserman. “They not only persevered through a once in a lifetime pandemic, but prioritized their clients and partnerships in a way that is consistent with our values and commitment to talent.”

Sam Gores, majority shareholder of Paradigm Music UK, stated “The UK music partners are an exceptional group, and we congratulate them on this new chapter.” Paradigm will continue its collaboration with Wasserman Music through the shared representation of music clients in film, television, theatre, and publishing.

Wasserman was represented by McGuireWoods as U.S. counsel and Clarke Willmott as U.K. counsel.

+ Island Records has promoted Jackie Winkler to vice president of A&R, it was announced today by co-CEOs Imran Majid and Justin Eshak, to whom she will report jointly. Based in Los Angeles, Winkler played a key role in signing and A&R of Lauren Spencer-Smith, and also works closely with Demi Lovato, Sabrina Carpenter, Olivia O’Brien and others.

Winkler began her career as an intern at Warner Records and was officially hired as A&R manager in 2011. She joined Island in 2015.

“Jackie has an exceptional ear and natural instinct for finding and fostering talent. Her deep understating across all aspects of A&R is exactly why she will thrive in this new role,” said Eshak. Majid said, “Jackie is highly respected in the artist and creative community.  Her ability to discover artists and put records together is top notch.”

Kelly Walsh (pictured at left) has been promoted to vice president at the PR firm Schneider Rondan Organization (SRO). Previously an account executive and tour publicist, her roster includes Nothing More, the HU, the Verve Pipe and the Jack Kerouac Estate, among other clients. She joined SRO in 2018 after stints at record labels Century Media and Prosthetic Records and having worked independently with such artists as Marty Friedman, Arch Enemy and Body Count as well as events like Chris Hardwick‘s Id10t Music Festival And Comic Con-ival and ALT 98.7’s Big Adventure Festival. At SRO, she coordinated events like Mike Tyson’s KIND Festival and helped founder/partner Mitch Schneider and partner Marcee Rondan with longtime clients Godsmack, Papa Roach and Gilby Clarke, among others.

Her promotion comes in tandem with the announcement that SRO is opening a Phoenix, Arizona office, adding to its current location in Los Angeles, Las Vegas and Nashville. Walsh moved from L.A. to the Scottsdale area in 2021 and will be leading that expansion.

Said 740 Project managing partner Charley Greenberg: “We are thrilled for Nancy to be a key driving force at the forefront of 740 Project achieving new heights moving forward. Nancy’s tenacity and elite skills make her the perfect fit to step into the role of resident.”

+ WME announced that Jordan Hallpike has joined the company as a crossover agent in the music department, based in London. He was previously director of music at the Ibiza Rocks Group and is co-founder of the creative studio Midnight Movement, where he worked with a list of clients that included Live Nation, Island Records, Sky, ITV, and Warner Music Group.

Just two days after Record Store Day, the company Vinyl Me, Please has announced that it is building an audiophile-grade vinyl pressing plant in Denver that is scheduled to open by the end of 2022 for production, tours and special events. The news also comes after years of a vinyl-manufacturing backlog that has caused the delay of vinyl copies of many releases.

“Quality control and availability are critical to maintaining and expanding our leadership position in the vinyl industry,” said VMP CEO Cameron Schaefer. “With this in mind, we’ve decided to press records in a way that provides an incredible experience for our customers and visitors to our plant.”

According to the announcement, the 14,000 sq. ft. pressing plant will be located in the RiNo neighborhood of Denver across from AEG’s concert venue, Mission Ballroom, and is being built as an experiential space where music fans can tour the facility, see first-hand how records are made, and explore music together in this extraordinary environment. The plant will be led by veteran record-maker Gary Salstrom, and guitarist/ Acony Records co-founder David Rawlings will be a partner and “Chief Groove Officer” for the plant.

+ As the world continues to await her sophomore album, singer Sky Ferreira has signed with global independent music publisher Third Side Music. Nearly a decade since her innovative pop debut “Night Time, My Time,” the singer has given recent signs that its follow-up may finally be on the way: She released her last single “Downhill Lullaby” in March 2019 and on March 31, 2022 she teased on YouTube () and her social media that something is coming soon. Ferreira was signed to the exclusive global publishing administration deal by Brontë Jane, Third Side Music’s VP of creative/director of A&R. She joins a roster that includes Sofi Tukker, Unknown Mortal Orchestra, Blonde Redhead, and BadBadNot Good.

“Sky is an unparalleled career artist who has proven to be a true visionary with her craft time and time again. I’m honored to welcome someone so incredibly singular to the TSM family,” said Jane.

+ The Recording Academy and its Black Music Collective are launching the “HBCU Love Tour,” a national tour of historically Black colleges and universities that aims to inspire students to pursue a career in music, educate prospective music industry professionals on career paths and opportunities within the music industry, and bolster Black representation within Grammy U and Academy membership. Led by the Recording Academy Board of Trustees, including chair Tammy Hurt and vice chair Rico Love along with CEO Harvey Mason Jr., the tour is kicking off with a pilot program on April 28 in Washington, D.C. with Howard University Students. Love will host the program, including a networking hour with Recording Academy and Howard University leadership, panels featuring Grammy-nominated rapper Cordae, the powerhouse songwriting-production team of Jimmy Jam and Terry Lewis, and more. The evening will also include a performance from the first ever HBCU Love Contest Winner and Howard University’s own, Precious Jewel, who was one of the 40 student singers, songwriters, and instrumentalists from Howard University to submit for an opportunity to showcase their talent in-person and to win a cash prize.

+ Republic Records has promoted Glenn Mendlinger to EVP of Republic Records and president of Imperial Music, as announced today by co-founders Monte Lipman and Avery Lipman. In the months since his appointment to the helm of Imperial was announced, Bo Burnham won a Grammy Award for “All Eyes On Me,” recent signing Stray Kids just debuted at No. 1 on the Billboard 200 and Twice scored two back-to-back Top 10 debuts on the Billboard Top 200.

Monte said, “In a very short period of time, Imperial has achieved historic milestones under Glenn’s leadership. His tenacity and sense of urgency have yielded unprecedented results, capturing the imagination of the independent music community.”

+ Sony Music Publishing has promoted Nick Bral to VP of creative. Based in Los Angeles, he reports directly to Senior Vice President Creative Jennifer Knoepfle. Since joining the company as an A&R assistant in 2013, he has worked closely with Dan Nigro — who he helped sign to the company in 2018 and who recently achieved international acclaim for his collaborations with Olivia Rodrigo on her debut album, “Sour” — Conan Gray, Wallows, Rob Bisel, Mike Sabath, and others.

Knoepfle said, “Nick has made great strides in identifying, signing and developing talent in his time at SMP. He is dedicated, focused, and goes above and beyond for his writers and artists time and time again.”