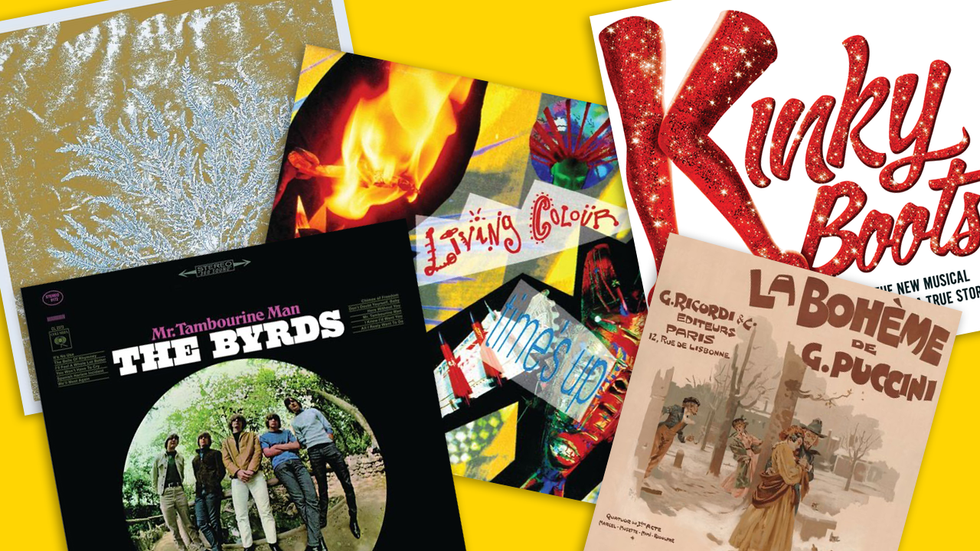 Warpaint’s Emily Kokal joins us in discussing memorable run-ins with our favorite players. Plus, musical obsessions!

Q: Have you ever met one of your guitar heroes? How did it go?

A: Yes—John Frusciante. It went great; we ended up living together for three years.

Huerco S. and all things old and new ambient. Suzanne Ciani, Eno, Jon Hopkins, Autechre, Boards of Canada, Tony Scott. I listened to the Huerco S. album For Those of You Who Have Never (And Also Those Who Have) constantly before writing our new album. I don’t know if it had any direct effect on the album itself, but my favorite song on the record is called “Promises of Fertility,” and it did have a direct effect there, I think, because I’ve since had a child.

A: I met Roger McGuinn back when the Byrds played the Peekskill Palace on June 29, 1969. They had just released Dr. Byrds & Mr. Hyde, and McGuinn had a completely new Byrds lineup with Clarence White, John York, and Gene Parsons. It wasn’t exactly a popular time for the Byrds, and they were playing an afternoon and evening show that day. The afternoon show was a very small crowd, and my brother and I were sitting in the first row, waiting for the concert to begin. Roger walks in with his Rickenbacker over his shoulder and sits down between me and another guy and starts talking to us, and even asked us what songs we’d like to hear. It was a moment I’ll never forget, and both the afternoon and evening performances were terrific.

My musical obsessions center around my love of guitars. It was hearing The Byrds’ Mr. Tambourine Man and seeing Roger (then Jim) McGuinn playing that Rickenbacker 12-string that made me want to play guitar. I started taking lessons, and even had a pair of those McGuinn “granny glasses.” Since then, I’ve acquired many guitars (mostly electric) and, of course, had to have a Rickenbacker (I have two: a 36012-string in jetglow, and a 360 6-string in mapleglow, like Roger’s). I currently play in a local band, Stark Raven, mostly for fun, and love playing any type of guitar rock!

A: While covering the 2007 Ellnora Guitar Festival at the University of Illinois Urbana-Champaign, I made my way to a beverage area set up for press and artists who’d arrived the night before the show opened. As I perused the small spread of beers, in walked one of my biggest influences from my teen years—the man who’d almost single-handedly gotten me into funky chords and blistering chromatic runs: Vernon Reid of Living Colour.

Before you knew it, we were sitting elbow to elbow on a comfy little couch, shooting the breeze about this and that. Truthfully, I can’t remember a single thing we talked about. I’m sure I came across like a starstruck, bumbling fool, but cool ol’ Vern must be used to that, because he didn’t let it show!

I don’t know if I can quite call it an “obsession” (yet?), but I’m definitely finding myself more and more intrigued with opera, including Mozart’s Don Giovanni and Giacomo Puccini’s La bohème.

A: In 2004, my girlfriend (now wife) and I were at the Blue Note in New York to hear Jim Hall and Charlie Haden play as a duo. After the set we headed upstairs to hit the restroom before catching a cab. As I waited for her, the dressing room door opened a crack and out walked Jim Hall. “Hey man, how are you?” he said. I somehow formed a sentence before he invited me into his dressing room and closed the door. A few minutes later Charlie Haden popped in and I had this amazing talk with two absolute heroes. Then the door suddenly opened and both Jim and Charlie looked puzzled as this woman (my girlfriend) barged in. “She’s with me, guys.” Nearly 20 years later, that has become a core memory for me.

Thanks to a few musical pit gigs (Kinky Boots and The Sound of Music), I’ve been drilling down on my reading chops. It’s very fulfilling to be tasked to play the exact same thing night after night while a live theater show is happening above your head. There’s no musical issue that 100 gigs can’t fix.