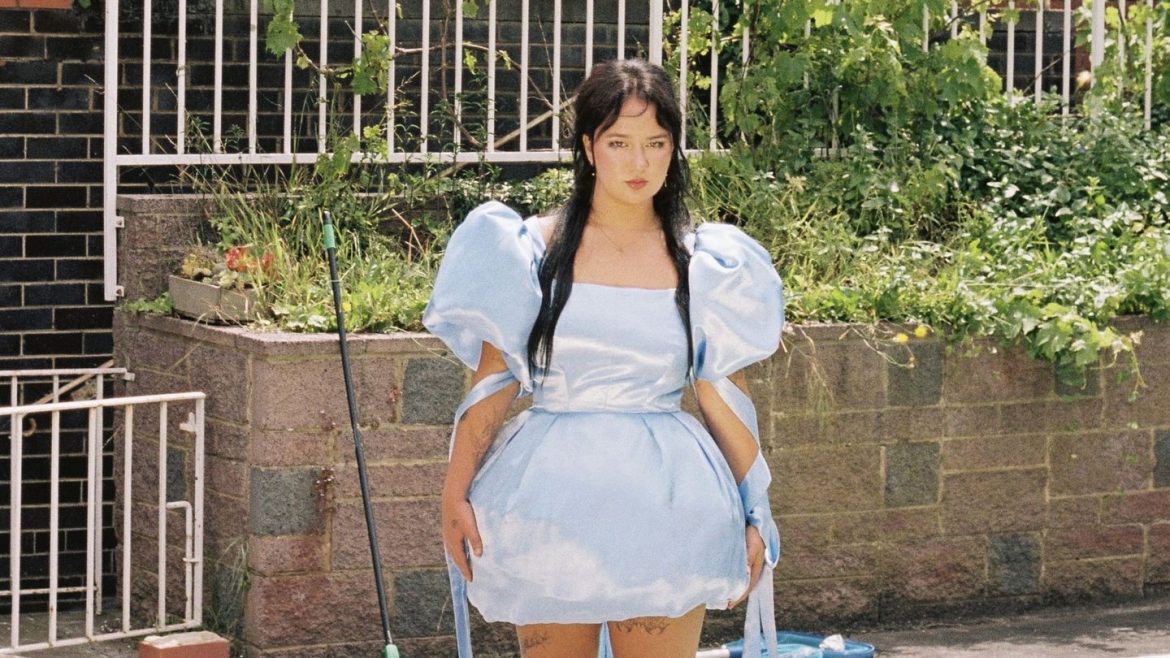 The ascension of Mallrat has been a long time coming. The Australian pop songwriter born Grace Shaw honed her work religiously over three EPs in the late 2010s. With each of these projects — 2016’s Uninvited, 2018’s In the Sky, and 2019’s Driving Music — the scope of her ambition and skill grew, as Shaw evolved as a producer, expanded her own musical tastes, and matured as a songwriter. Her first single of 2022, “Your Love,” represented a higher level to her art, a biting mix of hip-hop and pop unlike anything she’s created before. The result of this refinement is her long-awaited debut album Butterfly Blue, which incorporates new sounds into Shaw’s pop framework. This is the exact album she wanted to make, and no one was going to stop her.

Butterfly Blue began to take shape around the release of In the Sky, on which Shaw added more complex and overlapping synths into her production on tracks like the sonically packed “Groceries.” After Driving Music was released, Shaw buckled down and spent the next several years largely in Melbourne crafting her debut, a lengthy process she’s grateful for in that it allowed her to craft and tinker to bring her vision to life. “It meant that I didn’t have to compromise anything about the album. I had lots and lots of time to make it exactly how I wanted,” she tells MTV News.

Shaw wanted to explore more sounds, so she did. “Your Love” combines blaring synths with snares and hi-hats and includes a sample from Memphis rapper Gangsta Pat’s 1995 track “Killa, Part 2.” Shaw introduces guitar riffs with plenty of chunky distortion, like on the aptly named “Rockstar.” In order not to limit herself in the directions her songs may go, Shaw enters into the writing process with an open mind. “I don’t usually have things that I want to achieve before I write a song. I just start the song and then make it as good as it can be,” she says. Instead, she notes more general musical ideas and textures she enjoys as elements she wants to incorporate during production. She became interested in the contrast between “really distorted, aggressive sounds, and really beautiful vocal samples,” as found on the hook of “Heart Guitar,” which combines a gently sung melody with a gruff looping guitar riff.

Butterfly Blue is both cohesive based on the pop elements Shaw has used as Mallrat before, but unrestrained by any idea of what a pop song can or cannot be. Single “Teeth” is a growling punk track with vicious riffs and chaotic climaxes, and “I’m Not My Body, It’s Mine” shifts from piano and guitar to billowing vocal harmonies and electronic distortion in the blink of an eye. Being able to take her music wherever her mind wanders is the point. “I don’t think I could do it if I had to compromise even a little bit,” Shaw says. Since Butterfly Blue is her debut album, she doesn’t feel the weight of expectations about what she’s supposed to sound like, something she’s grateful for. “I hate being told what to do,” she summarizes with a laugh.

As such, the album fits snugly into the present moment as pop becomes increasingly experimental while standing on its own merits. This was a key focus for Shaw, who says she wants to keep her music “timeless.” She stays up to date on trends and new production techniques, but always with an ear towards making them her own, like on the exhilarating waves of electronically enhanced vocal harmonies and fuzzy electro-pop of “To You.” “I don’t pull up a recent popular song that we like and say, ‘How can we recreate this?’ We just make something that’s cool,” she says.

Her collaborators help keep the energy exciting. She points to fellow Australian producer Styalz Fuego — who has worked with a range of artists from Imagine Dragons to Tinashe — as someone whose artistic meticulousness matches her own. This also extends to singular, often controversial rapper Azealia Banks, who joins Shaw on “Surprise Me.” As another creative with an unshakable vision of their work, Banks served as a natural partner. “She put so much care into her verse,” Shaw says. “She recorded it several times, like, ‘This can be better.’ And then she’s kind of become a little bit of a mentor to me in the process.”

Shaw’s meticulous approach to writing follows her into her production, an area she maintained a constant presence in during the recording of Butterfly Blue. “If I’m not involved in production on a song, I get very bored,” she says. One of her favorite production choices that she added to the record was the huge number of vocal harmonies and the integration of her main vocals into the instrumental mix in a way that complements both. This is heard perfectly on “Obsessed,” where Shaw’s sung melody and instrumental backing weave in past each other at the top of the mix. Shaw says listeners (including her) identify with voices instinctively based on human nature. Part of it comes from a preference in her demoing process: Her early general vocalizations and gibberish often morph into vocal backings on the finished songs. “I don’t usually record lyrics that I hate,” she states plainly.

As Butterfly Blue arrives and more of the world begins to discover Mallrat, it’s with the knowledge that the music they’re discovering was made on her own terms. The drive to create exactly what’s in her head has led to her working hard to always make sure she’s putting out the best possible work she can be proud of. “That is an attitude that I think has carried through much of the album,” she says, “and it’s something that I’m going to take with me.”