Lil Durk Puts on for Chicago at Triumphant Hometown Show 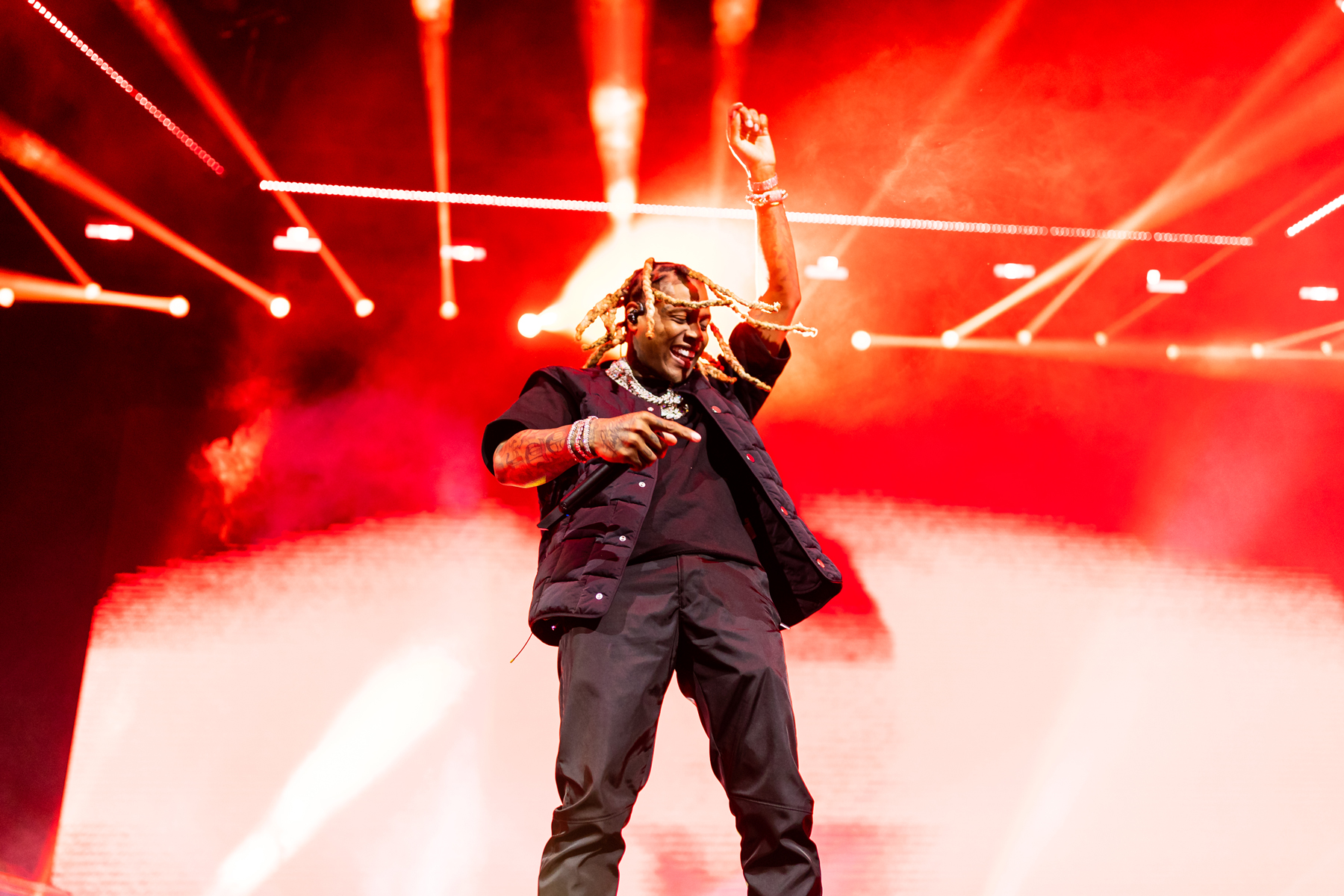 CHICAGO — Security, weed smoke, and “G-Fazos” — a local nickname for Air Force Ones, made famous by G Herbo — filled up the United Center on May 2. The arena has hosted historic events from homegrown talent like Derrick Rose and Kanye West before; this time, the crowds were there to see Lil Durk’s last stop on his 7220 tour, his biggest show ever in his hometown. This moment means a lot to Durk and his OTF crew, but also for the city of Chicago, the place that birthed drill, a subgenre that has since become a worldwide force.

Headlining a show in his own city has been a long time coming for Durk. “I remember when we were on tour with Meek a couple of years back, and then the Chicago date came up and we had to take the night off. [Local authorities] wouldn’t let us perform on that one night, and we were official support for that whole tour,” says Ola Ali, an OTF executive and manager for Lil Durk. “So going through moments like that in your hometown for so many years makes being able to sell out United Center by ourselves on our own tour that much more special.”

The entire night was an ode to the city, with Durk delivering intimate moments meant for his hometown. Fans from the front row pit all the way to the back of the arena chanted “Don’t respond to shit with Von,” paying tribute to Durk’s slain protege King Von, as the star and his live band kicked off the show with the militant yet catchy single “AHH HA” from his latest album, 7220. Leaving no time for fans to catch their breath, Durk quickly followed that with “Hellcats & Trackhawks.” The fans loved it — at one point, he completely put his mic down to let the crowd do all the work of rapping each line.

The switch from vicious bars to heartfelt melodic crooning felt just like you were listening to a Durk album when he moved on to perform 2021 standouts like “The Voice” and “Backdoor.” Before the two women seated in front of me could shout out their request to hear their favorite songs and see India, Durk’s fiancée, he fulfilled those wishes. Starting with “Blocklist” and then moving to “Home Body” from his 2018 project Signed to the Streets 3, it was time to cater the women who made up a substantial part of the audience. It was officially the grown-and-sexy part of the show, so Durk took advantage of the moment and brought out India to the stage while he performed a song titled after her name.

Durk’s commitment to have all of his guest appearances be Chicago artists, with the exception of Louisiana’s Fredo Bang, defined this as a rare night for the city that we won’t forget. From Dreezy to Katie Got Bandz performing a Chicago classic, “Pop Out” (highly recommended to turn on while you put your outfit on before leaving the house), it was clear that Durk wanted to shine the spotlight on his hometown’s artists. Calboy took the stage and performed his 2019 hit “Envy Me,” which everyone in the crowd still knew word for word, and rising rapper Lil Zay Osama made an appearance too.

Yet nothing was more special than when Durk granted another wish from the fans and brought out G Herbo himself. “He better stop playing and bring out Herbo,” I heard a voice say in front of me. Next thing we knew, there he was, delivering his verse from Nardo Wick’s “Who Want Smoke?” remix that features Durk and 21 Savage. Herbo then proceeded to the 2014 track “Kill Shit,” an anthem that’s more important to some in the city than the national anthem. Durk took a moment to share with G Herbo and reflect on their position as two of the most prominent rappers out of Chicago with success and longevity in the industry. “They really not fucking wit us,” said Lil Durk.

From that point on, the stage was treated like a family reunion, with more than 40 people all on stage as Durk went through hits like the Pooh Shiesty-assisted “Back in Blood” and “No Auto Durk.” Last but not least, he concludied the night with another unofficial national anthem of Chicago — and still, to this day, one of the Number One go-to songs at rap concerts in the city — Chief Keef’s “Faneto.”

When everyone was on stage for “Faneto,” it was a full-circle moment to 10 years ago, when drill music was taking the world by storm for the first time and Chief Keef, Lil Durk, and King Louie performed live for the first time at the Congress Theater, where they opened for Meek Mill. Drill has gone on to evolve into popular forms in New York, the U.K., and even Italy, but the roots and impact that Chicago rappers have on the genre is unforgettable. It was only right that Durk delivered a night with similar impact.

https://www.youtube.com/watch?v=tfh8ynYS7X4 Multiple studies link music study to academic achievement. But what is it about serious music training that seems to correlate with outsize success in other fields? The connection isn’t a coincidence. I know because I asked. I put the question to top-flight professionals in industries from tech to finance to media, all of whom had serious (if often little-known) past lives as musicians. Almost all made a connection between […]