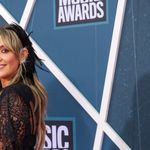 After years of grinding in music city, ACM New Female Artist of the Year Lainey Wilson officially has country fans at her very fingertips. The powerhouse vocalist recently (May 16) announced that her new single titled “Heart Like A Truck” and music video would be arriving this Friday, May 20.

The “Neon Diamonds” singer took to social media to share the catchy chorus of the semi-autobiographical anthem. The 29-year-old penned the melody jammed-packed with clever metaphors with Trannie Anderson, and Dallas Wilson. She produced the hit alongside critically acclaimed creative, Jay Joyce.

“I love seeing how excited y’all are for this Song! Let’s gooo! #heartlikeatruck #bellbottomcountry,” the singer wrote alongside the preview.

In a western style hat, circle aviators, and a beaming smile – the chart-topping artist recorded herself lip-synching the touching lyrics to the first single from her forthcoming record. Throughout the up-tempo track, the Louisiana native tells her long personal story to stardom. Wilson also touches upon how she has grown as an individual since releasing her debut album, “Sayin’ What I’m Thinkin.”

The sneak peek that displays her savvy songwriting and distinct sound, instantly pulled listeners in. Her loyal community rushed to the comments to show their excitement and to applaud the playlist-worthy jam.

“I feel this in my soul❤️❤️❤️,” gushed a fan. “Wow! That one will take a ride to number 1, congrats on another hit, @laineywilsonmusic,” said another.

The fast-rising star tested out “Heart Like A Truck” in front of a live audience during her set at CRS New Faces. The performance received thunderous applause from industry executives, labels, and other musicians.

“These past few months have been such a whirlwind, but man, it was quite the journey to get here. Miley wasn’t playing when she said, ’it’s about the climb,’ because it really is what builds character and teaches you the most about yourself,” said Wilson. “’Heart Like A Truck’ is all about self-discovery, growth and embracing scars as badges of honor. After all, a truck that has hit a few bumps and earned some scratches has proved itself and its tenacity—the shiny one on the lot can’t say that.”

“Heart Like A Truck” follows the bell-bottomed country star’s second No.1, “Never Say Never” with multi-platinum artist Cole Swindell. The two performed the sizzling single in the pouring rain during the 2022 CMT Music Awards.

Within the last two years, Wilson experienced several career firsts. She watched “Never Say Never” dominate country radio, earned her first No.1 with the enlightening hit “Things A Man Oughta Know,” scored Song of the Year at the 2022 ACM Awards, and made her Late Night TV debut on “Jimmy Kimmel Live.”

The release date for her highly anticipated project has not been confirmed. As country music buffs eagerly wait for new material, they can see her live on Jon Pardi’s Ain’t Always The Cowboy Tour alongside breakthrough artist Hailey Whitters. “Heart Like A Truck” will also hit country radio on Monday, May 23.