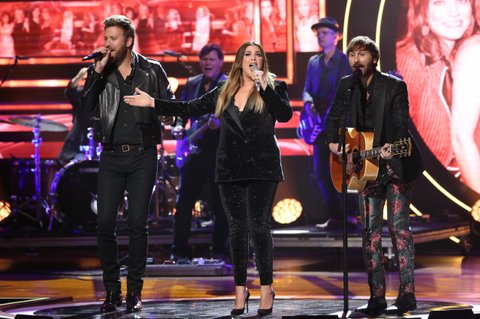 It’s been nearly three years since Lady A made a career leap to a new record label. When they signed with Big Machine Label Group, president Jimmy Harnen encouraged the country trio to push their musical boundaries in order to start their next chapter strong.

Following several brainstorming exercises, they collectively decided that they wanted a debut single with robust lyrics and the same sound as their 2010 hit “Need You Now.” When songsmiths Ryan Hurd, Laura Veltz, Sam Ellis, and Jon Green pitched “What If I Never Get Over You” – the group felt like they instantly hit the jackpot.

Lady A recently (May 16) caught up with BMLG to reflect on the breakup banger and to discuss the decision-making process. Charles Kelley declared that the group toyed with the idea of returning to their roots for quite some time, but never had the right song to follow through with the plan.

“We’ve been chasin’ a lot of that sound of ’Need You Now’ for the longest time,” said Kelley. “We almost felt like this was the perfect time to maybe chase that down again cause so much time has been in between.”

The hitmaker mentioned that they did not want to recreate “Need You Now,” but they were seeking a song that would perfectly round out the emotional narrative.

“This was kind of a continuation of that story. It was like 10 years later,” he shared. “’Need You Now,’ like there’s still hope. And then ’What If I Never Get Over You,’ it’s like, well that door’s closin’. It’s gone, and now I’ve got to come to terms with that and move on. So, there was just something about it. I mean, everything about this song felt so much us,” he added before their leading lady Hillary Scott chimed in.

The high-energy duet that touches upon the meaning of time, closure, and moving on struck a chord within Scott.

“This song in particular, the lyric pulled us in. We loved the melody, we loved everything about it. It felt so relatable to so many people, to everybody,” she declared. “I think we’ve all been there. And it just felt like that great back-and-forth duet that we really love getting to do together.”

Throughout the heartbreak anthem, Scott and Kelley take turns belting the weighted words that convey the haunting love story. Hurd told Billboard upon release that the song’s meaning could be interpreted in several different ways.

“It’s about grief,” he acknowledged. “I don’t think people use that word when they’re talking about the death of a relationship a lot. And I think that’s truly what that is: It’s saying goodbye to part of your life.”

The “Chasing After You” singer said the finalized cut resonated with his mother, and reminded her of his late brother.

“What If I Never Get Over You” became Lady A’s first No.1 song since their chart-topping 2014 hit “Bartender.” The heart-wrenching track lives on their 2019 collection, “Ocean.”

The multi-platinum trio is set to perform fan favorites on their upcoming Request Line Tour with special guest Dave Barnes. Lady A is set to kick off their track in mid-August in Nashville and will wrap in October. Tickets are available for purchase to hear “What If I Never Get Over You” live and in person.