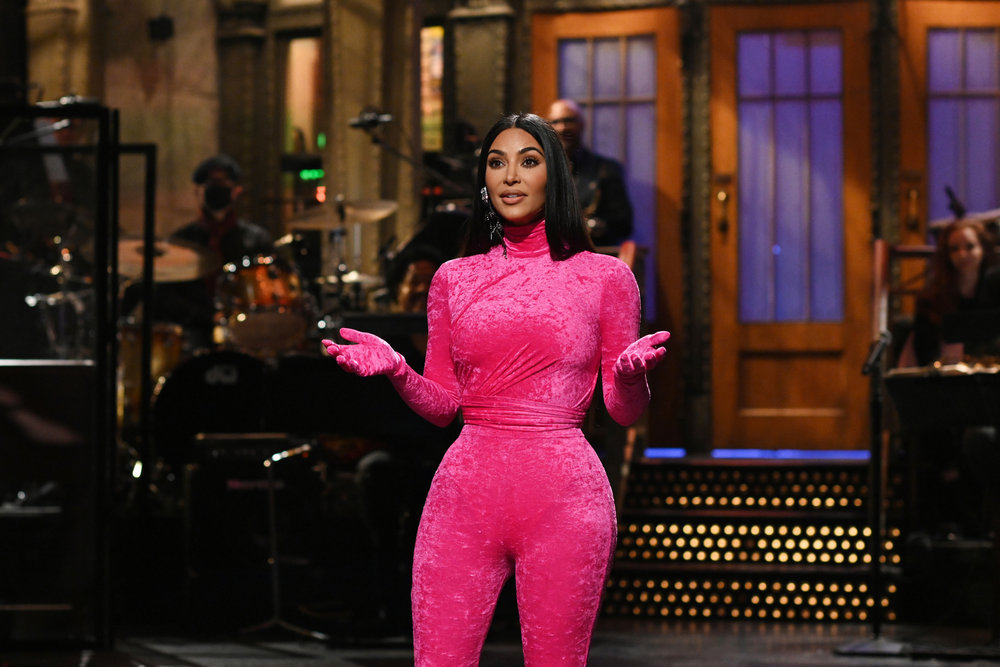 By now, the entire world knows who Kim Kardashian kissed when she hosted “Saturday Night Live” — and it wasn’t her ex-husband Kanye West.

However, even though the couple was in the midst of their divorce when Kardashian took the “SNL” stage in October 2021, it turns out that she actually considered having West as her musical guest that night.

On the first episode of “The Kardashians” — the famous family’s new show that launched April 14 on Hulu — one of the major storylines focuses around Kardashian preparing for “Saturday Night Live.”

“I’m kind of going back and forth, since Kanye’s album is out,” Kardashian says in the episode, after she tells her family that Lorne Michaels invited her to host the show. “That would be epic if he was my musical guest. But then, do I want my own moment?”

Ultimately, Kardashian explains why she opted to not have West appear as her musical guest.

“This is my first time, and I kind of want this to be about me and not about, ‘How are they gonna act to each other?’” she says. But, as she’s pondering, she tells her stylist, “It would be so cool for the kids to see mom and dad together on ‘SNL.’”

In the episode, as she’s nervously getting ready for “Saturday Night Live,” Kardashian admits she was upset by a tweet from Debra Messing — who Kardashian simply calls “a girl from ‘Will & Grace’” — that was critical of Kardashian hosting the iconic show. (When NBC announced Kardashian as host last year, Messing had tweeted: “Why Kim Kardashian? I mean, I know she is a cultural icon, but ‘SNL’ has hosts, generally, who are performers who are there to promote a film, TV show or album launch. Am I missing something?”)

Once she got onstage at “SNL,” Kardashian did end up poking fun at West. “I married the best rapper of all time. Not only that, he’s the richest Black man in America,” she said during her monologue. “A talented, legit genius who gave me four incredible kids. So, when I divorced him, you have to know it came down to just one thing: his personality.”

In Hulu’s premiere episode, which was filmed last fall, Kardashian and West are featured as having a solid co-parenting relationship. In one scene, when Kardashian is worried that another version of her sex tape from two decades ago could be floating around without her consent, she calls West as her trusted confidante and gets advice from her ex over the phone. Plus, in the episode, the reality star and businesswoman’s last name is still Kardashian West. Fast forward to today, and with her divorce finalized, her last name is simply Kardashian.

For anyone who has been following the news recently, it appears the relationship between the former couple has taken a turn. Kardashian has been subject of verbal harassment on social media from West, who has also spoken negatively about her boyfriend, “Saturday Night Live” comedian Pete Davidson, in a music video and at events tied to his album “Donda 2.” Amid the social media attacks, Kardashian filed a complaint to the Los Angeles Superior Court, claiming “emotional distress” and asking for expedited proceedings in her divorce, and the Grammys banned West from performing due to “concerning online behavior,” despite him being nominated (and winning two awards). Kardashian was declared legally single this March.

In Variety‘s March cover story on the Kardashians moving to Hulu, the Skims billionaire said she will address her divorce on the show, but will keep the details private to protect her family. “Being in the public eye and having disagreements publicly is never easy,” Kardashian told Variety. “I don’t think I would ever criticize the father of my children on my TV show. That’s just not really what I’m about, and I just don’t think that would ever make me feel good.”

“I will, as of now, and hopefully always, take the high road,” she elaborated in an interview last month. “But we do see a lot of our co-parenting journey, which I think is going to be really beautiful for people to see.”

Speaking of Davidson, the first episode of the Hulu show does not dive into their relationship — yet! — but Kardashian shares that he gave her advice before she came onto “SNL,” which was the night they kissed on-screen during a skit for the comedy show.

Later in the first episode, while Kim is sitting at a restaurant with Kourtney Kardashian and Khloé Kardashian, she addresses West again, telling her sisters that Kanye wants to “quit everything and dedicate his life to being my stylist.” She continues, “Kanye’s always dressed me, always styled me.” She shares that he has been emailing her looks since the early 2000s, adding, “That’s always really been our thing. But there’s also a side of me that wants total independence, too.”

Kim, Kourtney and Khloé star in “The Kardashians” with their mother, Kris Jenner, and younger sisters Kendall Jenner and Kylie Jenner. All six women serve as executive producers.

“The Kardashians” does not shy away from the Kardashians’ real-life sagas that have taken over the tabloids. From Khloé’s relationship with NBA player Tristian Thompson, to Kylie’s second pregnancy, to Kourtney’s engagement to drummer Travis Barker — the first season is expected to cover all the drama. After all, putting their lives up for public consumption over the past 15 years, ever since they were introduced on E!, is what made the Kardashians who they are today.

As Khloé recently told Variety, “I wish I never had to talk about that because it’s not a fun thing to talk about. But it is part of my journey in life, so we will see it on the show.”