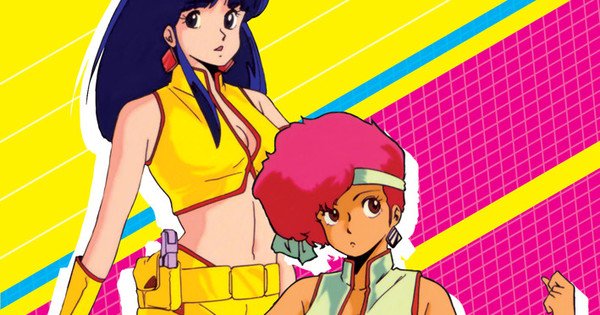 ADV‘s original dub featured the company’s own music and sound effects because the original track had been lost when it first licensed the anime in the 90s. The lost music and effects track made it difficult to dub the anime because the Japanese voices were stuck on the only existing audio track.

The Kickstarter page stated that the discovery of the music and effects track for the original Dirty Pair television series is what made the campaign possible.

The campaign ended successfully in November, raising a total of US$731,406 from 3,303 backers. The campaign has funded all stretch goals.

Both Pamela Lauer and Jessica Calvello will reprise their roles as Kei and Yuri for the new dub.

In the 22nd century mankind may be technologically advanced, but there are still some problems that can only be fixed by a couple of women who won’t back down from a fight! These are the adventures of Kei and Yuri, two official Trouble Consultants for the World Welfare Works Association (WWWA) who use their brains, brawn, and looks to solve any problem. They call themselves the “Lovely Angels,” but because their solutions often result in chaos and mass destruction, the rest of the universe has dubbed them the “Dirty Pair”!

For Kei and Yuri, no two missions are ever the same. As the WWWA’s top Trouble Consultants, they take on all sorts of odd jobs, like chasing down treasure in high-tech ruins, fighting off political assassins, and even avenging the death of… a plaster statue? In the end, only one thing’s for sure: anything that stands between these two and victory is sure to be destroyed!

The project’s Kickstarter page states that Right Stuf and Nozomi Entertainment will utilize 75% of the funds collected for dubbing, production expenses, and acquiring rights clearances. The project will utilize 15% of the funds for the production of the materials, media, and packaging; and utilize 10% of funds for overhead, working capital, fees to run the project on the platform, royalties, and staff costs.

RetroCrush and Crunchyroll began streaming the anime in the U.S. and Canada on October 1.

The anime adapts Haruka Takachiho‘s science fiction comedy novel series of the same name, with illustrations by Yoshikazu Yasuhiko. The series began in 1979, and the eighth novel in the series, Dirty Pair no Daichōyaku, shipped in 2018 as the first novel in 11 years.

Aside from the television anime, the novels have also inspired an anime film, as well as several video projects, manga, and American comics. The title duo made their first anime appearance in 1983’s Crusher Joe: The Movie.