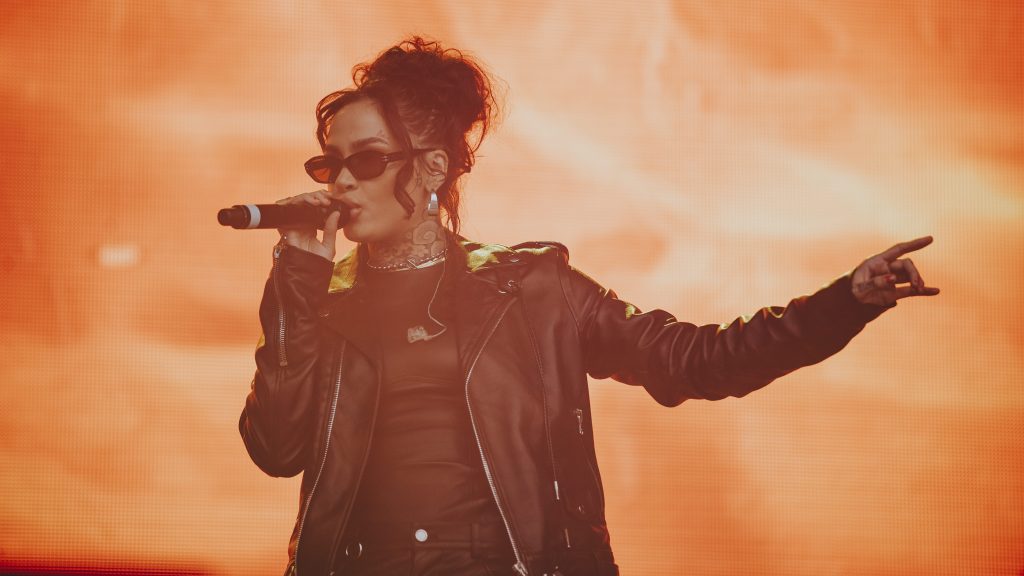 Cynicism is a growing phenomenon in music. True love songs are hard to come by these days. Deriving its name from Rihanna’s “We Found Love,” Yellow Diamonds is a series of lyric breakdowns in which VIBE Senior Music Editor Austin Williams celebrates songs that sound like love found in a hopeless mainstream.

I took a work trip for the first time since the pandemic. Over the weekend, I covered Dreamville Festival 2022 in headliner J. Cole’s native North Carolina. While most of my peers suffered withdrawals from the temporary pause that COVID-19 put on live events, fiending for networking opportunities and Instagram photos, I felt a sense of relief—I hate work trips. Because they usually mean spending time away from the only person whose company I feel addicted to: My girlfriend.

Coincidentally, on the day of my flight from New York City to Raleigh, NC (Friday, April 1), Kehlani and Justin Bieber released a record that’d describe exactly how I’d feel until I got back home on Monday. The third single from Kehlani’s forthcoming blue water road LP, “up at night,” is an upbeat song that puts a positive spin on the anxiety one feels when they’re forced to sleep separately from the one they love.

A weekend away from my partner might not sound like a long time. But when you’re as busy during the week as we are, Saturdays and Sundays come with precious moments that feel more like prison bids when we’re forced to spend them in solitude. I wasn’t exactly alone, though. Other than the tens of thousands of festivalgoers in attendance, a few new friends kept me company.

Before day one of Dreamville Fest, I had a long brunch with David, the music publicist whose invitation brought me to town in the first place. We’d spend many more hours after that brunch talking about everything from the state of digital media to West Elm furniture. Midway through that same Saturday, I linked up with Preezy Brown, VIBE’s Hip-Hop Reporter. This would be our first time ever meeting in person despite us both living in Brooklyn (we were both hired during the pandemic). Next, I met Brittany, a deeply spiritual Atlanta woman who entered an unspoken agreement with me that made us official festival buddies—we were attached at the hip from EarthGang’s mid-day set on Saturday to J. Cole’s closing set on Sunday.

To me, the most effective part of “up at night” is its focus on the wee hours of seclusion. When you spend a weekend or more away from your partner, it’s easy to fill your days with distractions in the form of other people, whether you get paid to attend Hip-Hop festivals or not. But if you’re a person of certain morals, nighttime is undeniably lonely—you have no other choice but for it to be. In turn, that loneliness becomes restlessness, and you wind up tussling with your floral-scented hotel linens. Kehlani and Justin Bieber make this experience sound a lot more positive than it feels.

You wonder why I love you, there was never pressure

Easy as I want to, there’s just no one better

And what could I say? I knew that it would go this way

Or could you blame it on fate? (Fate) I couldn’t let it just escape

Now at the end of our days, I’ll run back thoughts of you

Ironically, the shortest verse of “up at night” offers the most profound explanation as to why one may struggle with loneliness when separated from their partner. When something feels natural, or “easy,” as Kehlani puts it, that means it’s a habit. A universal rule of habits is they’re resilient, and breaking one means disrupting a fundamental part of ourselves.

The following pre-chorus, which reappears later as a bridge, ends with the consequence of that disruption. Now at the end of Kehlani’s days, no matter what type of distractions she’s filled them with, all she can think of is the person she’d rather fall asleep beside.

I think about all of the ways you turn me on (Turn me on)
And my bed gets lonely whenever you’re gone
But, baby, I’m a wreck without you
All I do is fantasizе about you (You)

You’re the light of my life, yеah I mean it
Girl, you got what I want, what I needed

And even when the sun don’t shine
I’ll be right by your side, holdin‘ you tight (You tight)
And when you feel like nobody cares
I’ll be right there to remind you that

Reuniting with Kehlani for the first time since their “Get Me” collaboration, Justin Bieber begins his take on codependence with a more sexual sort of longing. Horniness is certainly an aspect of loneliness that few people can avoid. One could argue it makes not being able to fall asleep that much more excruciating—until you search certain websites and it suddenly isn’t.

About halfway through Bieber’s verse, his yearnings become more sentimental. As corny as it may sound, “You’re the light of my life” is something I’ve said to my own partner word for word. What follows is the song’s most endearing performance, as Bieber, a pop star who’s especially gifted at flirting on wax, rattles off a series of romantic declarations that’d make Nora Ephron blush.

The chorus, of course, is the centerpiece of the single, as Kehlani repeats the refrain, “Thoughts of you keep me up at night.” Aiding the sweetness of the song’s lyrics is the subtle nostalgia of its sound. Produced by Rogét Chahayed and Pop Wansel, “up at night” has a ’90s bop to its beat. It actually sounds like the sort of record that’d ring off at a nightclub (I didn’t venture to find out, as North Carolina is one of the few Southern states with a club scene that’s gone widely unremarked upon in Hip-Hop).

Following Dreamville Fest, I landed at JFK on Monday around 1 p.m. ET and spent the next few hours in the airport writing the edition of Yellow Diamonds that you all (hopefully) read on Tuesday. By the time I got home, around 5 p.m., my girlfriend had already finished work and begun one of her virtual grad school classes. The pursuit of her master’s degree in social work occupied her time until around 9 p.m., which is when old men like me retreat to bed.

I don’t know exactly what time I fell asleep that night, but I know it wasn’t until she snuggled up next to me. That was the first quality night’s rest I’d gotten in 72 hours.