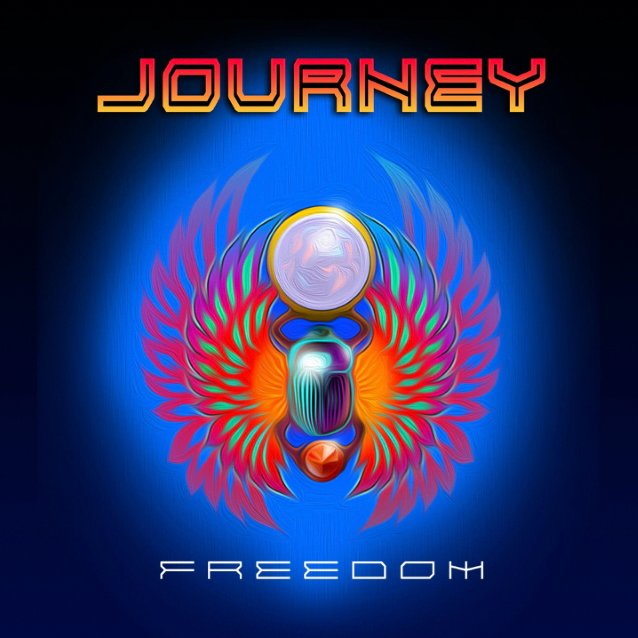 Legendary rockers JOURNEY have released a new single, “Let It Rain”. The song is taken from the band’s upcoming album, “Freedom”, which will arrive on July 8 via BMG except in Europe and Japan, where it will be issued via Frontiers Music Srl.

“Just coming off of the first leg of our sold-out JOURNEY ‘Freedom’ tour, we are excited for our new single release ‘Let It Rain’ as it offers a sampling of what the next new chapter of music we have in store on our new album ‘Freedom’,” says the group’s founding member, guitarist, songwriter, and producer Neal Schon. “It’s so exciting to see multi-generational fans in our audience; many of them being very young and singing all the songs and very open-minded to the new material. We look forward to seeing you all for the second leg of our summer tour.”

Emerging from the pandemic with a supercharged new studio lineup, “Let It Rain” will be followed by an epic 15-track set of new original songs that brings back the grand scale of the group’s greatest moments, along with updated and bold new directions and sounds.

Schon adds: “We didn’t immediately work on the song. It just sat there as a jam for a long time, and then every once in a while, I’d come in to work on something, and Narada [Michael Walden] would play it for me, and I’d go, ‘Wow, we should really fucking work this thing up. There’s something there.'”

While the forthcoming album was made with visions of arena and stadium stages, it started from humble beginnings. In 2020, as COVID-19 swept the globe, Schon was stuck at home like the rest of us. “During the pandemic, there wasn’t much to do,” he says. “I spent a lot of time in my little studio at home, learning how to play keyboards and looping. Some of those ideas ended up being songs. So it kind of came out of nowhere.”

As JOURNEY‘s legend continues to grow larger and their touring gets bigger, “Freedom” will be the first album of new material to be released in 11 years, since 2011’s “Eclipse”, and in addition to longtime keyboard player and primary lyricist Jonathan Cain and vocalist Arnel Pineda, one more member was recruited for the upcoming album — bassist extraordinaire Randy Jackson, who had played on JOURNEY‘s 1986 album “Raised On Radio”.

JOURNEY‘s current touring lineup features bassist Todd Jensen, a veteran musician who has played for various artists, including the bands SEQUEL, HARDLINE and HARLOW, as well as David Lee Roth, Ozzy Osbourne, Steve Perry, Alice Cooper and Paul Rodgers. Also part of JOURNEY‘s current incarnation is returning drummer Deen Castronovo, who shared the drum duties in the band last year with Narada Michael Walden. Walden, Jackson and keyboardist/backing singer Jason Derlatka all joined JOURNEY in 2020 following the band’s acrimonious split with drummer Steve Smith and bassist Ross Valory. Jackson — who previously played with JOURNEY during the mid-1980s — was forced to miss all the recent gigs because he is reportedly recovering from back surgery. Prior to JOURNEY‘s recent Las Vegas residency, Jackson had been replaced at the band’s 2021 shows by Marco Mendoza, who had played several shows in 2019 with Castronovo and JOURNEY guitarist Neal Schon under the “Neal Schon’s Journey Through Time” banner.

“Freedom” includes the single “The Way We Used To Be”, which came out last June. The song was the multi-platinum band’s first new music since 2011’s album “Eclipse”, and the first track released by the band’s revamped lineup. “The Way We Used To Be” marked Walden and Derlatka‘s first studio recordings with the band, and Jackson‘s first since 1986’s “Raised On Radio”. The song was produced by Walden at his Tarpan Studios, with co-production by Schon and keyboardist Jonathan Cain.

Since the group’s formation in 1973, JOURNEY has earned 19 top 40 singles, 25 gold and platinum albums, and has sold nearly 100 million albums globally. Their “Greatest Hits” album is certified 15 times-platinum, making JOURNEY one of the few bands to ever have been diamond-certified, and their song “Don’t Stop Believin'” has been streamed over one billion times alone.

JOURNEY was inducted into the Rock And Roll Hall Of Fame in 2017, and 2018’s co-headlining tour with DEF LEPPARD was the band’s most successful tour to date, landing them in the Top 10 year-end touring chart with more than 1 million tickets sold, and earning them the prestigious Billboard “Legends Of Live” touring award. March 2019 saw the release of “Escape & Frontiers Live In Japan”, a live DVD/CD set from their concert at the Budokan in Tokyo featuring the band’s first-ever performances of the albums “Escape” and “Frontiers” in their entirety. JOURNEY has also received a star on the Hollywood Walk Of Fame and were inducted into the Hollywood Bowl Hall Of Fame. Additionally, the band is the subject of the award-winning documentary “Don’t Stop Believin’: Everyman’s Journey” about the band’s resurgence upon adding Arnel Pineda as lead singer after founding member Neal Schon discovered the Philippines native on YouTube.

Last August, Schon gave a college radio simulcast interview to WMSC and WNUW where he discussed the progress of the songwriting and recording sessions for the band’s upcoming studio album. He said: “I learned how to play keyboards better than ever during the pandemic, which I’d never really done before. And that’s where our first single [‘The Way We Used To Be’] came from. [I sent it to] Jonathan [Cain, keyboards], and he did the lyrics on it and put a rough vocal on it. And then we had Arnel sing it, and we cut it and re-cut it in the studio, and it was just released. And a lot of people went, ‘Wow, man. I love it.’ 90 percent of people love it; the other 10 percent went, ‘I don’t think it sounds like JOURNEY.’ I go, ‘I never wrote it to be a JOURNEY song.'”

According to Schon, he and his bandmates had written over 30 new songs for the upcoming JOURNEY record. “Some of ’em are unmistakably JOURNEY without sounding like another song that we have; it just sounds like a new version of the band,” he said. “It’s ballistic, man. And there’s no lack of guitar on this record. So I’m excited about it getting out there. I think any guitar player out there is gonna love this record, because I’m just kind of unleashing on this record — like I do a lot live, but sometimes hold back in the studio. I don’t think it’s O.D.ing on the guitar at all and going overboard, but I like to check out the times and where I see music going. I usually have a pretty good gut instinct about it, and I feel like the late ’60s, the time and era of early Jeff Beck with Rod Stewart and [LED] ZEPPELIN when they first came out, Jimi Hendrix, the CREAM with [Eric] Clapton and Jack Bruce and Ginger Baker, that whole era, there’s a lot of younger kids out there, younger generation, that never got to experience that era. So I’m feeling like that is the era that I grew up in and that’s what I truly love doing and the type of music I love playing, so I’m going more there and I’m writing for that, to be able to do that on stage. And I think it’s really gonna trip some people out, when we finally do get this album out there and can combine it with all the hits that we do have.”

He continued: “There’s certain songs that are being mixed by Bob Clearmountain, that mixed our ‘Raised On Radio’ record, and he’s made it sound really amazing, really pulled it together. You have mixers out there sometimes that have this incredible ability to take work that you’ve done throughout a year, even though they were recorded at separate times, and different sounds here and there, and they pull it all together and they make it sound like it’s a tight album that has a focus sound-wise.”

Neal added: “The whole album, there’s not a filler on the record; that’s what I can tell you. I look at it, and I’m listening to it now, and many others that have known our music for a long time that have very good ears have said, ‘Look, this is the modern-day-and-age ‘Escape’. I think this could be the next ‘Escape’ for you guys.’ And I think that’s a bold statement, but honest to God, I feel like it’s that good.”