San Diego, CA-based metal band As I Lay Dying announce the exit of their bassist/vocalist Josh Gilbert. His departure follows that of guitarist Nick Hipa, who left the group in August 2021.

Miss May I‘s Ryan Neff now fills in on bass/vocals, while Ken Susi of Unearth sits in on guitars.

As I Lay Dying posted the below statement regarding this latest developments:

“As we have been nearing our first tour back since the beginning of 2020, there have been several developments within AILD that we’d like to share with our fans. The past couple years off from the road with the uncertainty of how or when touring would pick up again has provided time to consider new endeavors in life apart from AILD.

Josh Gilbert has decided to exit AILD to pursue other musical opportunities. Josh has been a strong contributor musically for AILD since joining in 2007 so we are grateful for all his contributions and his friendship over the years. We wish him all the best and are excited to see where this new path takes him in life.

As I Lay Dying will honor our touring commitments for the remainder of 2022 with the Two Decades of Destruction US Tour (June 10 – July 17) then European festival season in August.

We are thankful to have Ryan Neff, of Miss May I taking on bass and vocal duties for our upcoming tours. We first met Ryan down in Mexico City, playing together back in 2012, so we’re stoked to be sharing the stage with a familiar face and talented musician.

Joining us on second guitar for these two tours will be our good friend Ken Susi of Unearth. We have known Ken for almost 20 years, coming up in the scene and playing many tours together. Ken‘s style of guitar playing is closely related to AILD so we are excited to have a close friend and ripper of a guitar player joining us.

We are grateful for our fans’ continued support as we enter a new chapter of the band with newfound energy and enthusiasm. There’s been a lot of moving parts but what has and will always be the main priority of AILD is creating new music. We plan to have a new song out to you shortly before completing our full length by the end of the year.

We look forward to seeing many familiar faces on our upcoming tours and thank you for believing in us at every step of this band’s journey.”

“Hello, friends. After 15 years (almost half my life), I’ve decided to part ways with As I Lay Dying. Despite the ups and downs inherent, I’ll always be grateful for the profound privilege of being to able to grow up traveling the world playing music with the band. None of that would be possible without the fans of the band, so for that I sincerely thank you all so much for allowing me the opportunity. I wish the best for AILD moving forward, and I hope to see all of you sooner rather than later.”

“There’s been a lot of challenges and life changing decisions that many of us in the music industry have been facing since the pandemic struck in early 2020. It’s been difficult for a lot of musicians to feel a sense of stability and purpose being limited by the opportunities of traveling the world, playing music for their fans. It’s created time and space for many to rethink potential new paths in life. AILD has certainly been affected by this. With this issue being close to my heart, I feel the need to share a recent development within AILD, reflecting on the past to find hope for the future.

In 2001 I wrote a bunch of songs and then began forming a band with like minded musicians, eventually establishing As I Lay Dying. Along the way, dozens of musicians have been members or filled in on tours to help bring the As I Lay Dying vision to life on stage. Behind the scenes when making albums, it often felt pretty similar regardless of who came and went during the harsh conditions of touring as a band that was barely scraping by until 2003 when Phil Sgrosso joined the band.

Phil almost immediately became a primary songwriter with me, oftentimes working on riffs on the long drives between shows back in the van days. In subsequent years, I started handling a lot less of the guitar parts when writing to focus more on vocals, with Phil taking on more of the musical responsibilities and becoming a riffing machine. We used to pass the guitar back and forth in the tiny loft of an apartment I had at the time to create Shadows are Security, and we continued refining that process on An Ocean Between Us.

Fast forward to 2010 and the third significant songwriter in our band’s history, Josh Gilbert, became a part of helping us write The Powerless Rise. While I still consider many of our records somewhat of a group effort, I think it’s fair to give credit where credit is due to those two incredible songwriters who created most of those songs out of nothing. Josh has incredible talent both as a songwriter and additional vocalist, and on a personal level he was the one I felt most comfortable talking to while going through some of my biggest struggles to get back on my feet.

For that reason, Josh’s decision to move on and pursue other opportunities leaves me really missing him in a band where I’ve never felt this affected by the dozens of member changes in the past. It also leaves some very big shoes to fill but we are confident to be moving forward with our upcoming tours this year with Ryan Neff of Miss May I, who we first met playing Mexico City together back in 2012.

My reaction when Josh first told me that he was considering other opportunities, and that he’d potentially regret not taking them, was that I wanted my friend to be happy and fulfilled. There wasn’t any animosity at all in his reasoning or my reaction. I selfishly wish the timing was better of course, but we both agreed that there’s enough time for a new bassist/singer to step in and perform to the standards our fans can expect from AILD.

I don’t ever want to hold back people I love from doing what makes them happy. I sincerely wish Josh the best as he moves on to his next chapter in life, appreciating the time shared and memories created over the years.

You’ll see some news soon as to what Josh is up to next. Please be supportive and encouraging of him, just as we are. Apart from Ryan Neff joining us on these next two tours, our friend Ken Susi from Unearth who we’ve known for almost 20 years, will be filling in for us on second guitar. I’m honored to be sharing the stage with them both!

Thanks for letting me share my personal feelings about the impact my friend and ex-band mate has had on both my life and AILD. It was hard to reflect back on all these years without sharing a little bit of a story to give context to Josh’s importance in my life. Lastly, I’m thankful for his ongoing friendship moving forward.”

As I Lay Dying‘s immediate touring plans include the below summer tour with Whitechapel, Shadow Of Intent, Brand Of Sacrifice and Ov Sulfur:

With Brand Of Sacrifice: 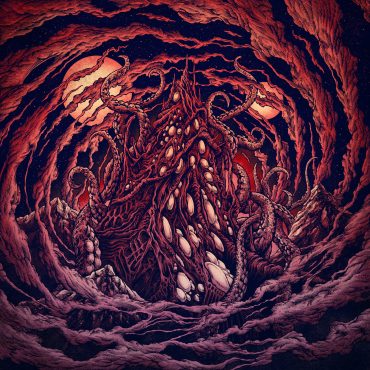