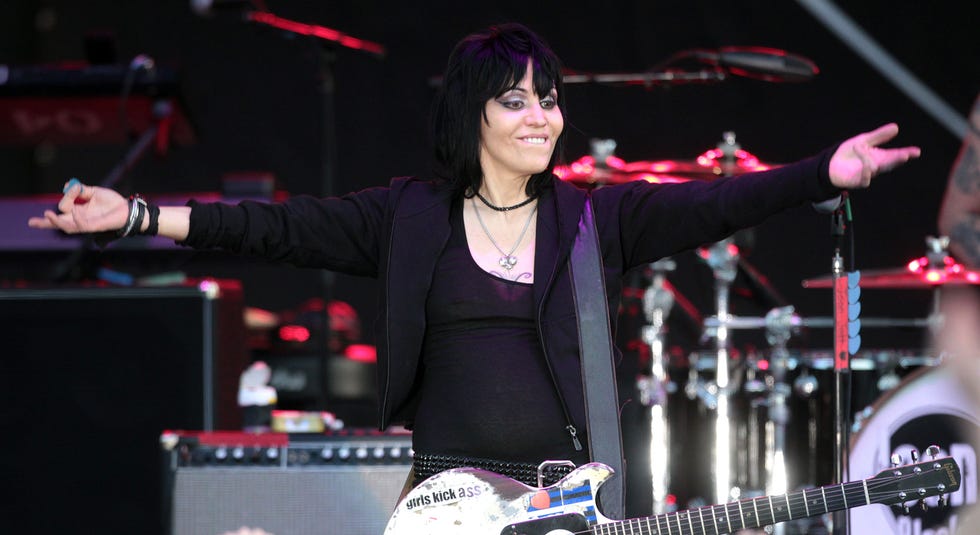 There are several people I’ve chosen not to believe in anymore—not in the supportive sense, but in the physical. Kid Rock. Kyrsten Sinema. Kellyanne Conway. A roommate I had in 2008. And, of course, Ted Nugent. I have adopted a belief that those people, despite really compelling evidence to the contrary, no longer reside on this planet. However, there are days where I reverse that stance, only because someone has roasted them so hard that I must recognize their existence in order to fully enjoy it.

In late December, Ted Nugent recorded himself on Zoom in a video that is, for whatever reason, titled “NUGEFIREROCK.” In said video, he rambles on uninterrupted for 39 minutes. His big rub at this particular moment in time was a Rolling Stone list of the 100 Greatest Guitarists. That’s where Joan Jett comes into the equation. Absolutely pressed mid-monologue, Nugent says,

This quote has been slightly condensed because there’s a lot of unwieldy, irrelevant shit said in between. But the TL;DR version is that Nugent doesn’t think Jett belongs on that list. In a later interview, Nugent attempted to clarify his comments, saying, “I started off by praising her. I even saluted the lesbian thing.” (Did he?) He then added something about how he has no hate and that his hate “was amputated” when he was five years old. (No idea what that means.)

Because Jett is a bona fide badass, she had a response. In an interview with NME, she said, “Is that his implication that he should be on the list instead of me? Well, that’s just typical—it’s what I’ve dealt with my whole life, being written off. Ted Nugent has to live with being Ted Nugent. He has to be in that body, so that’s punishment enough.” As Jett knows—and as Jennifer Lopez learned in the movie Enough—you can’t trust that an attacker is down for good just because you’ve got them on the ground, so she added this knockout: “He’s not a tough guy. He plays tough guy, but this is the guy who shit his pants—literally—so he didn’t have to go in the Army.”

Truly excellent work. Of course Ted replied again, in a video posted to his YouTube which I will not be embedding into this post because I personally care about you. Despite loving to call other people snowflakes, it seems Nugent got his feeling hurt, saying, “I love you Joan but you’re not a better guitar player than any of these guys and she just attacked me. I said there are a lot of killer guitar players, and Joan is a good guitar player. She makes great music, it’s not adventurous as I like, but she’s awesome. So she viciously attacked me personally, saying I was jealous because I was not on it.”

Jett has not responded to the comments and honestly, does she need to? I think she’s already won. So with this feud seemingly over (for now), I now return Nugent to the void of my mind where he shall remain until the next time one of rock n’ roll’s greatest needs to adjust him. Here’s Jon Jett singing “Cherry Bomb” as a palate cleanser.