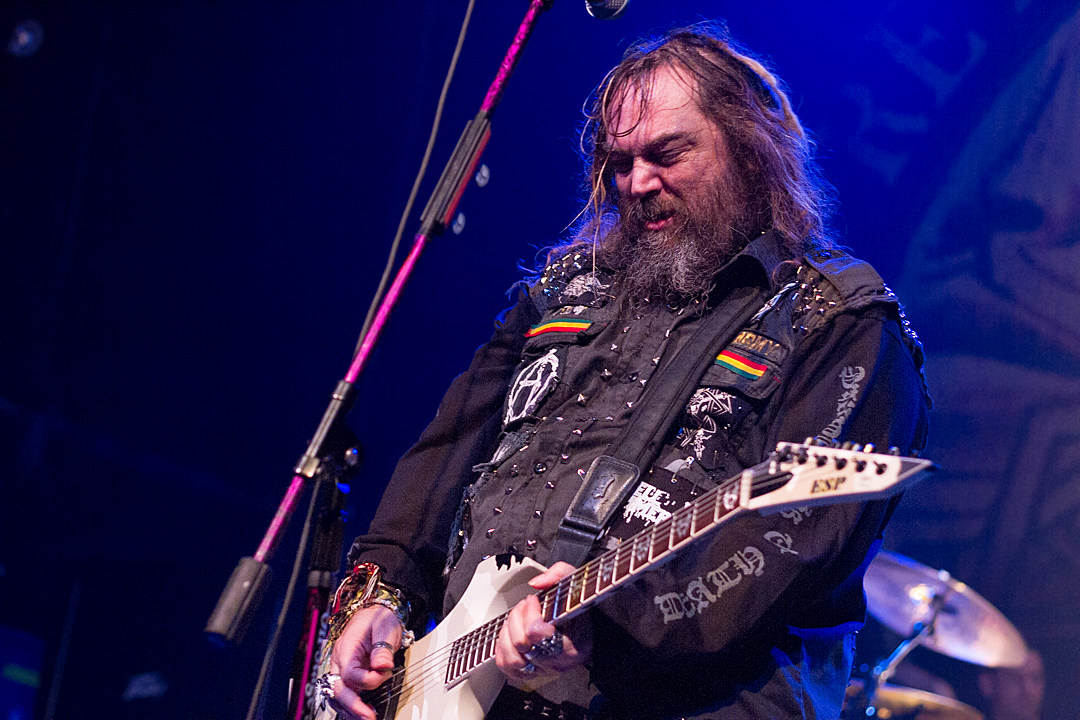 When we invited Max and Iggor Cavalera to recollect their favorite albums when they were teenagers, Max mentioned he had learned a lot of English by translating heavy metal lyrics and we instantly knew we had to know more. Always generous with his time, the icon was quick to jump on a Zoom call so we could dive right in.

Growing up in Brazil, the Cavalera brothers naturally spoke Portuguese, but as the children of an Italian father, some of that crept into their vernacular as well — mainly, curse words as Max recollected before shouting out the perennial Italian go-to, “vaffanculo,” which basically means “fuck off.”

While English was required learning in school, Max stopped his public education at just 12 years old. Sure, the more proper structural elements of the language may not have seeped in at an early age, but with a trusty Portuguese to English translation dictionary, his grasp of English grew the more he deciphered the words so many of his favorite bands were singing.

The leader even slightly lifted a lyrical concept from U2, a band he said had a massive influence on him when writing the classic 1989 Sepultura album, Beneath the Remains, in particular.

Did anyone in the family home know English? Was it an option in school?

You didn’t feel like school was going to give you a lot in Brazil at the time. You get your degree but you can’t get a job. Albums were my real English teacher.

Was learning English something you even had a desire for? When did that develop?

I still have that translation dictionary. My mom saved it. It’s where I got the name Sepultura, which I translated from Motorhead’s “Dancing on Your Grave” from the Another Perfect Day album.

At that time I was translating Motorhead, Black Sabbath, AC/DC, Iron Maiden, Judas Priest, Ramones, a little bit of Sex Pistols. It was a lot of fun — hours of going word by word with the dictionary and forming the sentences.

What themes were you drawn to as you translated these lyrics?

One record I translated that was very influential was U2’s War. I love Bono’s lyrics — he’s a great lyricist, especially in that old U2 era of October, War and Joshua Tree. War was an anti-war record, and I turned that into some of the “Beneath the Remains” lyrics.

Stuff like “who has won / who has died / beneath the remains” was very much from the U2 War record. The famous line from U2’s “New Year’s Day” was “Under a blood red sky” and I took that — “Under a pale grey sky we shall arise.” I love that you can borrow from other artists. People borrow my stuff all the time.

“Roots Bloody Roots” comes from [U2’s] “Sunday Bloody Sunday” and [Black Sabbath’s] “Sabbath Bloody Sabbath.” I wonder if U2 got it from Sabbath!

You can spend hours with the dictionary. When I finally translated “War Pigs” I was like, “Oh my god, this is so cool and interesting!” Then you realize the rhyming and I thought I had to do that, but sometimes you don’t need to rhyme.

“I see the world old, I see the world dead” I hated recording that because I couldn’t say “world” the way the producer wanted me to. My Brazilian [heritage] kicked in and [it sounded like I was saying] “word.”

I found Lemmy to be a great lyricist, and he never got credit for it. “Orgasmatron”… that’s a fucking masterclass in brutality. The lyrics are brutal but beautifully written.

It’s making up a new word. Did that resonate with you that you realized you can mash words together to create these new things?

In the early days of Sepultura, other Brazilian bands — Salario Minimo, Azul Limao, Stress, Harppia, Anthares, Taurus — all wrote lyrics in Portuguese. How did you decide which direction to head in regarding language?

In the beginning, we sang in Portuguese. We had one song called “Sexta-Feira Trese” which is “Friday the 13th” and another called “Bleeding Like a Pig Til You Die,” which was from a headline from a brutal newspaper with murder news and decapitation and all these great headlines. “Tropas di Choque” which is “Shock Troops,” which is [comparatively like] riot squads. I think we got “Troops of Doom” from that later on.

Most of the stuff we listened to were international and our idols were singing in English. Before we did the Bestial Devastation split, I told the guys in the band we should sing in English. We lived in a small part of the world with big plans. We got criticized by a lot of Brazilians and family because they said we had to sing in Portuguese and get big in Brazil.

The cool thing about English is it’s the international language. I love bands who speak different language, especially Finnish hardcore and you can make the same argument for Rammstein. It’s pretty fucking crazy.

In Soulfly, I started doing some full songs in Portuguese or little lines here and there to make it a little more exotic.

Did you write in Portuguese and translate to English after?

The very early stuff was written in Portuguese and our friend Lino would translate. He helped me write letters to Chuck Schuldiner from Death and Dark Angel and Mille Petrozza from Kreator, Trey Azagthoth from Morbid Angel… he translated it all to English.

There’s not a lot of rhyme in Bestial Devastation and Morbid Visions since it was translated. It’s cool that there’s no rhyming — it’s intense.

One song that was an issue was “From the Past Comes the Storm.” The original title was “The Past Reborns the Storms.” There’s something cool about wrong English.

Sepultura, “The Past Reborns the Storms” (Demo)

I love it! There’s different sentence structures in different languages and you get these non-traditional word combinations that sound so cool too.

Producers would be against it. I had my arguments with producers over the years because they’re trying to fix me too much. I told them, “This is me. This is my accent, please don’t try to change that.”

On the last Soulfly tour, Dino Cazares was talking to me and remembered an old Sepultura show where we played propaganda and I said, “This song is for all the people that talk shit on your back” and he said, “You should do that now.” We have a song called “Boom” that we played on the last tour, and I announced it that same way.

What album cycle were you in when you could confidently write lyrics in English without relying on a translation dictionary.

I felt secure enough on Chaos A.D. and out of everyone in Sepultura, I was the first to learn English followed by my brother and then Andreas [Kisser] and Paulo [Jr.]. Something clicked and I felt comfortable enough to write in English and what I like about my lyrics is I don’t pretend to be this great poetic lyricist. Other guys have that gift — I don’t. But I can make good caveman lyrics — “Chaos A.D. / tanks on the streets / confronting the police / bleeding the plebs.”

“Roots” is as simple as a baby nursery rhyme.

There’s an art to simplicity though.

It’s maybe even harder [to write] than a complicated song. What is exciting is that there’s a real fine line between simplicity and ridiculousness. You have to be right on the edge and about to become ridiculous but you hold the line and make it work somehow.

I find that to be motivational and hard to do. One of the best songs I’ve done in my career is “Eye for an Eye.” It’s very simple with minimal words and a real catchy chorus. I tried to recreate that a couple times and failed. It’s like hitting the lottery when you get it right.

Thanks to Max Cavalera for the interview. Follow Soulfly on Facebook, Twitter, Instagram and Spotify. Get your copy of the band’s new album, ‘Totem,’ (out Aug. 5) here and look for the retrospective box set ‘The Soul Remains Insane’ to drop on June 17.

The brothers take us back to where it all began.