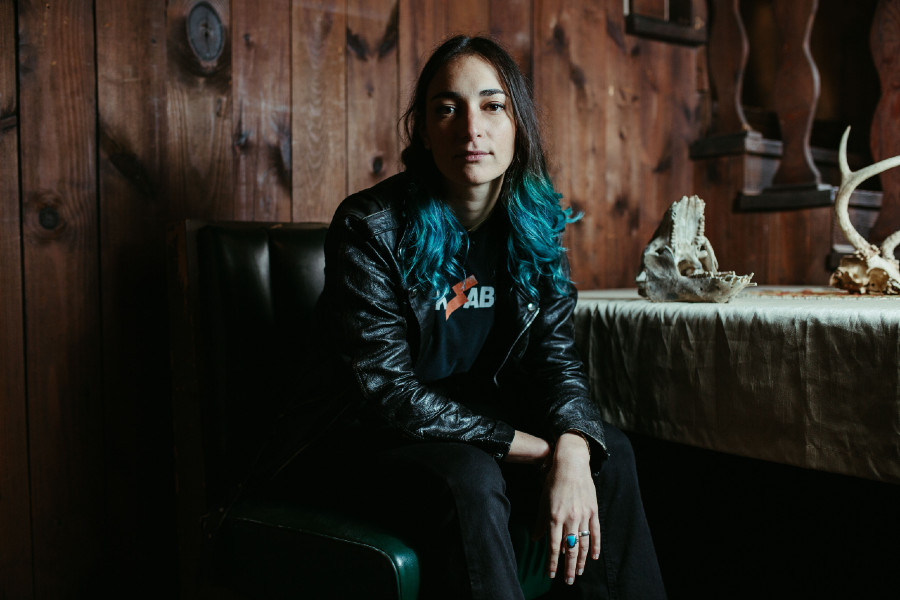 Nashville-based Americana-rock artist Cristina Vane releases her new single/music video, “How Ya Doin,” a track from her forthcoming album, Make Myself Me Again, slated for release May 20 via Red Parlor Records.

Guitar Girl Magazine spoke with Cristina Vane to discover more about the person behind the music, the inspiration for “How You Doin’,” her writing process, and her guitars.

What inspired your single/music video “How You Doin’?”

‘How You Doin’ is supposed to describe the frustration of being in a relationship with someone who is playing games when that’s not the place you’re in or what you’re looking for. It’s describing the all-too-common sequence in the younger dating scene – aggressive pursuit followed by a sudden disinterest.

Who directed the video and where was it shot?

Oceanna Colgan directed the video and we shot it at amazing musician Rachel Baiman’s camper in Nashville!

Tell us about your writing process.

My writing process can definitely change when I am in the swing of writing a lot, but otherwise, I like to make it a little ceremony; get some tea going, sit down with a candle and start playing the instrument I feel drawn to. I usually start with the music, then find a melody line, and then insert the words last, but I am trying to explore new writing methods too, like co-writing and melody first!

How did you first get into music?

I think I always loved music, I was a very musical baby and sang to myself often, and I just think that love grew and developed over time to be the obsession it is today! I started with piano in first grade, and of course, the recorder, driving my parents nuts. I found my love for the flute in middle school, and all the while loved singing and was in school choirs. I took some voice and guitar lessons in middle school for about two years, and then continued the flute and singing seriously while sort of playing guitar for fun. Eventually, in high school, I started writing songs just for fun and realized in college that I wanted to make a serious run of it!

Where are you from?

I was born in Italy and grew up moving every 3 years or so between Italy, England, and France (where I spent most of my young life cumulatively). I moved to the U.S. for college at 18 in Jersey, then moved to Los Angeles, and finally to Nashville.

Did your hometown impact your sound?

My moving around and being a third culture kid definitely affected my sense of self, and sense of place in the world, which has impacted my sound in its own way. I don’t play traditional Italian folk music or music from the Piemonte region where I was born so the short answer is no. However, being from several places including being half American has led me here and brought me to the world of American folk music. That definitely informed my entire sound and career path.

Did your sound evolve naturally, or did you push it deliberately in a certain direction?

My sound ended up evolving naturally (and it still is), though when I was just starting out writing I remember really wishing I identified more with my sound. I was proud of everything I wrote, but it didn’t sound particularly like anything exciting to me. When I discovered slide guitar, however, I felt like I had found my voice and my sound and felt really excited about both of those things! The more I have learned about different musical styles, I find that they have crept into my writing repertoire, especially on records. When I was first falling for old country and had just moved to Nashville, I used pedal steel which you can hear on the first record. Since then, my interest in hill country blues was piqued more and I wanted some harmonica on the last record. I think that if you are absorbing new material and keeping curious, things will take their due course.

Which artists/musicians had the most impact on your sound?

I grew up on a lot of ‘90s classics mixed with my parent’s taste:  Alanis Morrissette, The Cranberries, The Smiths, Dire Straits, Depeche Mode, The Rolling Stones, Aerosmith, Destiny’s Child, Blink 182, etc. I was obsessed with Slash & GNR in general, loved Led Zeppelin, Iggy Pop, Bon Iver, Metallica, The Black Keys… I went through a lot of different genres since then – punk rock, metal, indie, electronic, and more. The most tangible influences in my guitar playing since I started professionally pursuing music have been Rory Block, Mississippi John Hurt, Skip James, Blind Willie Johnson, and The Carter Family!

What kind of guitar do you play?

I play a custom National Resophonic from 2017. It is aged ivory except for the back, which is a blue burst, and it’s a Reso Rocket with the cutaway and a Slimline pickup installed in it. I love it and it’s my baby! The other guitar I play a lot is a Teisco-like Japanese factory-style guitar with a tiny red body that was given to me off the wall by the kind owner of Bon Ton L’Roy’s Steakhouse and Smokehouse in Monterrey, California. That thing has one foil pickup and just the volume and tone knob, but it rocks.

What’s your definition of tone? And has your tone changed over time or remained the same?

My tone has changed DRAMATICALLY. I cannot stress enough what a journey tone searching has been. I am pretty happy today with the sound I get from the constant combo of my National through my used Blues Jr. When I found this amp, it changed my entire perception of tone. Until then, I had been playing my brother’s old Vox solid state and it just didn’t sound the same. I thought it sounded great until I heard the warmth of tubes, and learned that I liked my bass really high when I play fingerstyle tunes, combined with a slight overdrive of master/volume to get the crunch I like when I dig in. It’s been a journey and the journey continues!

Which artists in your opinion are killing it right now?

Who or what inspires you?

I am usually inspired by strong emotion, sometimes by nature, or quiet moments of reflection. Sometimes it’s a story I hear that paints a picture, sometimes it’s my first time in a place and wanting to capture that in a song.

What can your fans expect over the next six months? New material? Live gigs?

I am releasing my second full-length album Make Myself Me Again May 20, 2022, and will be touring all over! You can find tickets on my website.