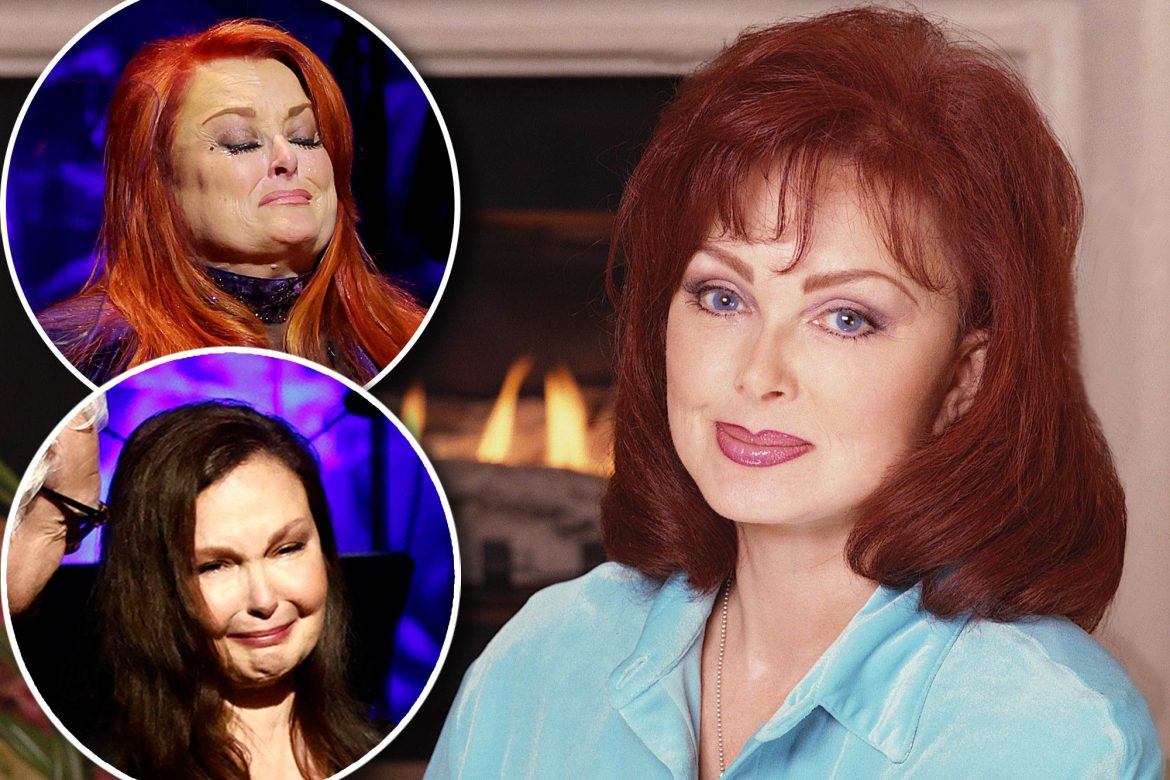 Naomi Judd’s family spent Monday night singing hymns in her memory as they prepared to lay the country music legend to rest.

But even as her loved ones are making plans to honor the singer, Williamson County Sheriff’s department in Tennessee is still investigating her death, a spokesperson confirmed to The Post.

The Franklin County Coroner is also carrying out an autopsy, the results of which will not be available for up to 12 weeks. It is not yet clear when her body will be released for burial.

“We are still in shock,” a close family member told The Post. “She was the best.”

The singer’s daughter Ashley posted a photo on Instagram of her stepfather, Larry Strickland — “my bereft Pop” — singing the hymn “How Great Thou Art” for Naomi, adding: “Be free, my beautiful mother. Be free.”

Naomi died aged 76 on Saturday, and multiple sources told People that she had committed suicide after years of struggling with depression.

But one family member will likely not be in attendance at her funeral: granddaughter Grace Kelley, the 25-year-old daughter of the other half of the Judds singing duo, Wynonna.

Grace is once again behind bars for a parole violation after a drugs conviction in 2017.

Wynonna has supported Grace through all of her legal turmoil. “I will tell you this. My daughter is the strongest Judd woman in our ‘herstory,’” she told Fox News in February 2020. “She’s healthier than I was at 23. How she got there — I would not go that way, but I was also sequestered.

“That could have been me if I didn’t have music,” she added.

Grace is currently being held in Debra K. Johnson Rehabilitation Center in Nashville. While no official request has been put in for her to attend Naomi’s funeral, Tennessee Dept. of Corrections spokeswoman Dorinda Carter told The Post the family could still do so.

Her incarceration is only the tip of a troubled history for the Judd family. As Naomi said in 2020: “I’ve been through an alphabet of tragedies and trials and I’m still here.”

Journalist Hunter Kelly, who knew The Judds well, saw Naomi only a few weeks before her passing. The singer died just a day before she was due to be inducted into the Country Music Hall of Fame alongside her daughter.

Writing in Rolling Stone, Kelly said: “I had lunch with Naomi to get some new quotes for her bio as she prepared to enter the Country Music Hall of Fame and embark on a reunion tour with Wy.

“She’d just taped the CMT Awards performance of ‘Love Can Build a Bridge,’ and it was encouraging to see her in her element…”

However, he added: “In spite of all that activity and excitement, Naomi’s sadness crept into our conversation. The trauma of her childhood still lingered, and she told me she was trying to get past it. She’d been so candid with her struggles with depression and offering hope to others in telling her story, I figured that was all handled, though …

“But now I have no choice but to stop and really listen to what Naomi was saying and realize the [planned] tour and the fame and the Country Music Hall of Fame induction were not the panacea I thought they were for her.”

At the age of 18, in 1964, Naomi — real name Diana Ellen Judd — gave birth to Wynonna on the night of her high school graduation.

“I got pregnant the first time I had sex,” Naomi recalled of her tryst with Wynonna’s dad, Charles Jordan. Three months later, when I called him to tell him to say I thought I was pregnant, he said, ‘Well, tough luck, kiddo,’ and he hung up the phone and we never heard from him.”

After giving birth to Wynonna — born Christina Claire Ciminella — Naomi said she “had to marry the town jerk to have a roof and a name.”

Judd and her then-husband Michael Ciminella moved to Los Angeles, where they welcomed daughter Ashley in 1968. The couple later divorced and the singer raised her two daughters on her own while working a receptionist job, admitting she was “a pay check away from the streets every night.”

At the age of 22, Naomi was beaten and raped by a drug-addicted ex-boyfriend after he broke into her home.

She took her girls and moved to Kentucky. They had no heat, no phone and no TV, and the family lived on welfare while Naomi studied to become a nurse.

After receiving her degree, Naomi moved the family to Nashville where she was the head nurse in an ICU. When she learned that the father of one of her patients was in the record business, Naomi got up the courage to hand him a homemade cassette tape of her and Wynonna singing. Brent Mayer loved what he heard and got them an audition at RCA records.

The Judds were signed to a record deal that would catapult them into country music history as the most commercially successful duo of the 1980s — with 25 singles, 14 No. 1 songs, eight CMA awards, five Grammys and more than 20 million records sold.

Naomi and Wynonna’s relationship was famously volatile. In 2016, Naomi admitted: “I love her but there are just times we need a break from each other.”

She told ABC’s Robin Roberts: “We’re still a little estranged from each other. And that happens with mother, daughters … Through the decades, we kind of grew up together and I’m always telling her, ‘If I’d known better I would’ve done better.’ Wy bore the brunt of all of the mistakes I made and we talk about ’em. We’ve been through a lot of therapy together.”

Naomi was forced into retirement in 1991 after she was felled by chronic Hepatitis C. Wynonna had continued as a solo artist.

While Naomi said she and Wynonna grew apart while filming their 2011 reality series “The Judds,” they reunited in 2015 for a Las Vegas residency.

During an appearance on Oprah Winfrey’s “Where Are They Now?” in early 2016, Naomi shared that Wynonna would get upset with how revealing her mother was willing to be in interviews.

And Wynonna, 57, has had her fair share of trouble. Her marriage to Arch Kelley III ended after two years in 1998. They had Grace and a son, Elijah, now 27, who recently married. The singer married her former bodyguard, D. R. Roach, in 2003, but three years later, he was arrested for sexual assault of a child under the age of 13 and they divorced immediately after. She has been married to singer Cactus Moser since 2012.

She has also struggled publicly with her weight, telling Oprah in 2004 that she had a “severe” dependency on food. Wynonna’s money woes got so bad that she turned to a residential treatment center, called Onsite, that treats money disorders.

Meanwhile, in her 2011 memoir, “All That Is Bitter and Sweet,” actress Ashley wrote of her traumatic childhood — including attending 13 schools before she was 18 — lived while her mother and sister were on the road. She said she was  abused at the hands of numerous men, including an unnamed family member. She also wrote that she was exposed early and inappropriately to sex because of her mother’s affairs with men.

Ashley has said she only learned to fight her demons after entering rehab for depression at Shades of Hope treatment center in Texas, where therapy exposed the memories of childhood incest.

The actress has, like her mother, also battled depression. In 2018, she launched a sexual harassment and defamation suit against convicted rapist and former studio head Harvey Weinstein, alleging that he lured her to his hotel room, asked her to watch him shower and tried to give her a massage.

Ashley also sued for defamation and retaliation, claiming that after she rebuffed his advances, Weinstein effectively blacklisted her in the film industry. The case is still ongoing.

She wept at her mother and sister’s Country Music Hall of Fame induction Sunday night, saying she wished Naomi had been able to “hold on” for the honor.

The Judds had recently announced their first tour in over a decade, a 10-date arena jaunt dubbed The Final Tour and set for the fall.

Tagged as Inside, Naomi.