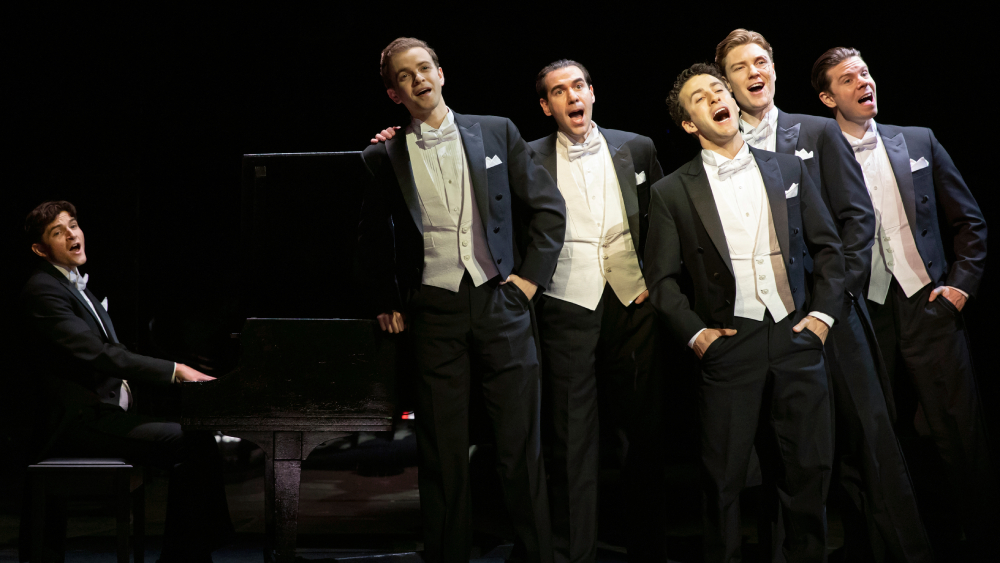 Since 1997, composer-singer Barry Manilow and lyricist-librettist Bruce Sussman — the team behind iconic ’70s pop classics such as “Copacabana” — have been looking to get their wise and witty “Harmony: The Musical” to Broadway. After its world premiere at San Diego’s La Jolla Playhouse, the pair brought its flashy historical tale to Philadelphia, Atlanta and Los Angeles before touching down for its current run at downtown Manhattan’s intimate Museum of Jewish Heritage.

It’s an appropriate venue for the show, a true-life tale of “the three Jews and three Gentiles” behind The Comedian Harmonists. This pre-Nazi-era, tightknit singing-and-slapstick act — an ensemble “hotter than horseradish” — was so popular in Germany (packed concerts, hit singles, films), then around the world, that “Harmony” starts not at home, but at the height of its powers on Dec. 16, 1933, at New York’s Carnegie Hall.

It was a night to remember: a sold-out show across the ocean, a telegram from NBC Radio asking to meet for a potential long-term program contract, a burgeoning artistic relationship with Josephine Baker. That same New York night, though, was also the beginning of the end in the recollections of the group member known as “Rabbi” (Chip Zien) — the last-man-standing (and singing) of the Comedian Harmonists, narrating the sextet’s story.

He blames youthful naiveté on the group’s demise. The Comedian Harmonists opted to return to Germany rather than stay in New York, with the ensemble’s members — one Bulgarian, several non-Jewish Germans (one of whom married a Jewish woman) and three young Jewish men — all figuring that the onset of Aryan Nationalism was all talk and would blow over like every other cockamamie hate-based organization in Europe at that time.

But as the Third Reich spread anti-Semitic fear, it soon banned the sextet from singing pieces by Jewish composers, then burned their existing films and recordings, and ultimately prohibited the group from performing in public until its Jewish members were summarily dismissed.

Sussman and Manilow’s score for the show lends a contemporary flair to the joy, brotherhood, disappointment, disillusionment and guilt experienced by The Comedian Harmonists — two tenors, one tenor buffo, one bass singer, a pianist and the baritone “Rabbi” (portrayed in his dotage by Zien and as a young singer by Danny Kornfeld) — and the women who loved them.

In particular, Manilow’s memorable melodies are both cleverly married to the schlager-showtune-cabaret vibe of its time while still sounding as fresh as yesterday. Whether through the Harmonists’ song-driven routines (as in the title tune and a fantastically staged, full-group “How Could I Serve You, Madame?”) or with a mournful conversation between wives (Sierra Boggess and Jessie Davidson’s “Where You Go?) or through the pointed, poignant numbers sung by Young Rabbi and Rabbi (“Every Single Day” and “Threnody”), Manilow’s pop prowess is ever-present.

Sussman, meanwhile, provides a crackling, cracking-wise script. While the true story, embellished and dramatized with several composite characters, touches on humorous Yiddish ideals specific to the Harmonists’ time (jokes about cantors’ sons finally getting the opportunity to sing in major keys got huge laughs), there is also a vibrant, frenetic feel for present-day language in Sussman’s texts. Dictators never change, even when their rants do — or, to put it in Sussman’s words, “It’s the same hate, just different uniforms.”

Every element of “Harmony” clicks in place like a gorgeous puzzle. A creative team of theater veterans, including director-choreographer Warren Carlyle and lighting designers Jules Fisher and Peggy Eisenhauer, navigate the Museum’s small space with dynamism and dexterity. Using back wall mirrors and video imagery to expand the scope of the stage, “Harmony” feels like a mega-watt Broadway musical, but in Battery Park.

The same less-is-more approach can be heard in music director John O’Neill’s opulent klezmer-meets-Tin Pan Alley orchestrations for his small band. When Rabbi looks back at the thrilling action aboard a night train to Munich when a Young Rabbi winds up in a chance meeting with Hitler, the frustration and lifelong guilt of the elder and the deer-in-headlights inactivity of the younger are heightened to haunting, then raging effect through Manilow and O’Neill’s tensely melodic and grand arrangement for “Threnody.”

Each of the performers embodying the Comedian Harmonists — Kornfeld, Sean Bell, Zal Owen, Eric Peters, Blake Roman and Steven Telsey — look and sound the part while still coming across as contemporary. The individual quirks, humor and stubbornness of their characters show through as deliciously as do their in-tandem musical talents for interwoven, close harmony.

The two women at the heart of “Harmony” display similar levels of passion, but for different reasons. As someone dedicated to real protest in the face of an incoming Nazi regime, Ruth (Davidson) directs the same rage toward her husband’s cowardice in standing up to the Reich. The Young Rabbi’s wife, Mary (Boggess), is no less passionate or political, but saves her slow-burning ire for the sake of self-preservation. Both performers and their characters inspire genuine heat.

The forceful actor at the center of the show, Zien, aptly portrays the duality of a Rabbi plagued with guilt for his inactions, but also filled with a gentle, funny nostalgia for the gleeful music and comedy that he and his five collaborators brought to the world. In addition, Zien manages to pull off playing Albert Einstein, Robert Strauss and a pre-fame Marlene Dietrich (top hat, tights, growly Germanic vocals and all). It’s a study in athleticism and theater magic.

And that’s the greatest thrill of this “Harmony.” Along with arriving at a collective sense of family by show’s end, this history lesson also demonstrates the power of making humanity sing, even in our darkest hours. 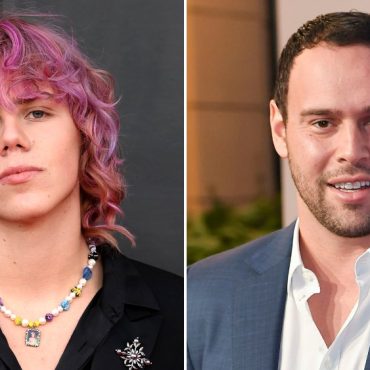 The Kid Laroi Slams Scooter Braun: Working With Him Was a ‘Mistake’

Not mincing his words. The Kid Laroi has something to say about his former manager, Scooter Braun, and he isn’t holding back. The “Stay” singer, 18, blatantly called his prior deal with the music exec, 40, a “mistake” via TikTok on Wednesday, April 13. “Show me ur last mistake. Use this sound,” the Australia native captioned his most recent video, promoting his upcoming song “Thousand Miles.” As the track plays […]