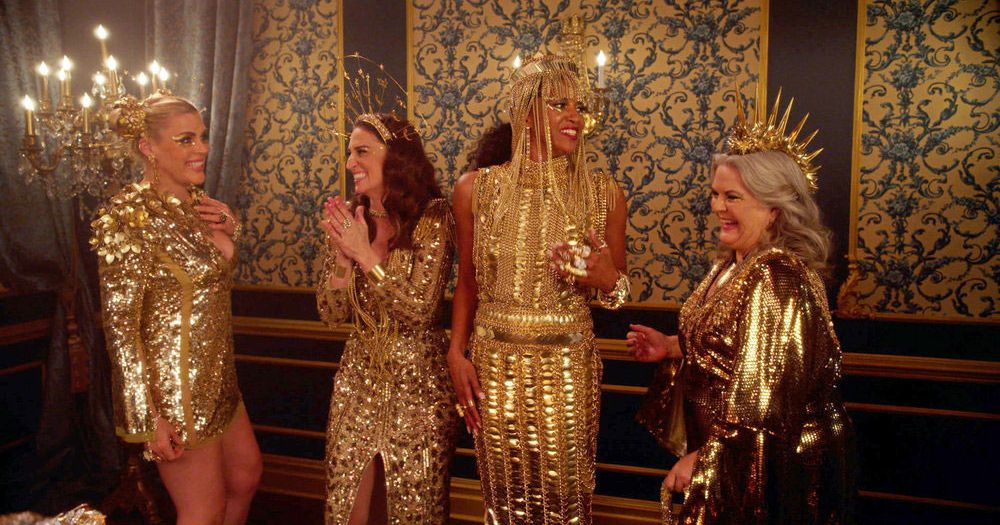 “Let’s talk about who you know (Contacts!) / ’Cause I know everyone.”

Another four-star episode! Am I just planning on awarding four stars to every episode of season two as a nod to the Girls5Eva Jingle Ball number? While that would indeed be dazzlingly clever, that’s not my recapping game plan, I assure you. This second season is making me fall in love with characters I didn’t find particularly compelling in the first. Sure, they said funny things, sang Jeff Richmond’s brain-lodging tunes with flair, and convinced me I ought to use the last of my wizened eggs in the creation of an L.A. lonely boy (“Sip cup full of green juice / Scans Variety for reviews!”). But like their manager-assigned pop personas, the women’s personalities seemed limited to one or two traits each. This season, the quips are just as sharp and the songs are every bit as catchy, but the characters and relationships have deepened so much that I found myself swallowing a throat lump during a speech about ugly-foot acceptance. I couldn’t help it. She’s growing, guys! Wickie is growing!

The group members may be blossoming, but Girls5Eva has hit a wall. Gloria’s knee surgery has brought the publicity train to a screeching halt. Summer, the wanton Jezebel of the Summer and Kev saga, has lost her following. And Wickie’s foot oglers have little interest in her pursuits above the ankle. When the group broadcasts an Instagram Live video to no one, Wickie realizes their lack of fans will torpedo the upcoming album. They need to mine their Rolodex of industry contacts to get their career momentum back. Well, their two contacts. Since Carson Daly is still nursing a grudge after five broken Girls5Eva betrothals, the ladies have got, let’s see … Fred Durst and Stinker. The first option being Fred Durst, they reach out to Stinker.

In his “Line Up” video, Stinker had Lady Liberty lip-sync the Girls5Eva vocals, so Dawn isn’t hopeful he will grant them a cameo in his next project. Luckily, the 81st slot on the “Who U Know” call sheet remains unclaimed, so the women arrive on set prepared to bring everything they’ve got to the roles of “VIP party guests.” Scott is off bicycling for pal Declan’s “boychelorette party,” and New York lonely boy Max (Julius Conceicao) isn’t yet old enough to be left alone at the Guggenheim with kid-size cortado in hand, so Dawn brings her kid along to the shoot. Security confiscates everyone’s phones, leaving Max with only lipstick and a never-ending CVS receipt to occupy his time.

Gloria is far more agitated than little Max by the fact that she can’t access her screen. Caroline (Janine Brito) has inquired about pain relievers — surely a pretext for a booty call — and now she’s going to be staring at three dots until Gloria can get her device back into her trembling hands and type “Bayer.” Summer chides her pal for mooning over an old lover while simultaneously harping on others to venture out of their comfort zones. Move on, Gloria! To get over someone, ya gotta get under someone! Gloria confesses that she’s never successfully picked up a woman. Caroline hit on her, and to every other suitor, Gloria droned true-crime statistics until their vulvas dried up and skittered away. Summer may have been slow to understand the mechanics of a salad, but she flirts as easily as breathing. She therefore casts herself as Gloria’s pickup coach, her glossy grin fading as she watches Gloria blow shot after shot with several comely crew members. Sure, there’s probably a way to get laid by babbling about detective vomit and severed appendages, but Gloria hasn’t found it. Yet. Keep the faith, Gloria.

Gloria’s love life is circling the porcelain spit sink, but at least she and the rest of Girls5Eva will get their juicy music-video moment. Oh, wait, no they won’t. The camera whips past them, guaranteeing they’ll be unrecognizable to the public as anything but four sparkly smears. Realizing that if this doesn’t work out, they’re going to have to pull favors from the composer of “Nookie,” the women start gyrating against Stinker as he sings. Surprisingly, Stinker uses the take. He respects rule-breakers, and Olivia Wilde hasn’t appeared for her call, so the rapper rewards the ladies’ gumption by putting them in another setup. Dawn is thrilled that Wickie is using her publicist guise to score the group some sweet perks but feels less enthused when she learns “the fierce one” has negotiated a role for Max. Wickie, for whom attention and a sparkly wardrobe are basic human requirements, doesn’t understand why Dawn — by all accounts a good mother — is against Max having these things. The wardrobe department will even double as a day care. Where, pray tell, has Wickie erred?

Dawn loves being a pop star almost as much as Wickie does (no one loves being a pop star as much as Wickie does), but she also regrets how fast she was forced to grow up. For her kid, she wants a normal, boring existence. College. A stable job. A life that might have fewer dizzying highs than his mother’s, but one that will spare him such soul-smashing lows. If Max crushes his little dance and falls in love with the spotlight, he might follow in Dawn’s footsteps. Yeah, no. With visions of scuzzy handlers and tabloid lies dancing in her head, she yanks Max from the video. Now, I totally get her reasoning. And I’ve seen some truly cloddish youngsters morph into poised little Streeplets when they’re put in front of a camera. But I’ve also watched Max dance to Michael Barbaro, and I just didn’t see in his awkward boogie a kid destined to tread the boards.

Indeed, once Dawn changes her mind and allows her son to assume the role of Tiniest Stinker, Max behaves like the oblivious preschooler he is, finding more interest in the blocking tape than in J Swerve’s sizzling choreo. Dawn rejoices, rewarding her perfect, rhythmless progeny with another string of coupons to decorate. Gosh, the day is going well! The women rocked their second scene with Stinker and have just received word they’ll be replacing Keanu Reeves in the motorcycle sequence. But when Stinker declares that the girls have really come through for him and the no-shows are cowards, Girls5Eva remembers that Wilde is a badass and Reeves knows kung fu, and neither would duck the shoot without good reason.

The good reason involves Stinker’s impending cancellation for his mowing down of military headstones in a Tesla, a leaked photo of his penis, and garnering J.K. Rowling’s support, which leads to Stinker canceling the entire shoot. But Wickie won’t let the whole day go to waste, so they use the backdrops and wardrobe pieces to make a year’s worth of social-media posts. No matter what their fans might need in the next 12 months — a mall murder solved, a World Series celebrated, or just a little reassurance that Fort Worth is a pretty okay town — Girls5Eva will have it covered. The afternoon ends on a high note, especially for Gloria, whose wince-worthy efforts to woo have actually resulted in getting a phone number. For the first time in ten years, Gloria considers offering her heart to someone new. But then she gets her phone back, sees that Caroline has texted her a vag pic, and goes running back to the muff that’s warm and familiar. You never forsake your favorite Muppet.

• I hate that this show made me consider which beloved Henson creation most resembles the frontal nethers. That said, I’m going with Sweetums.

• I mean, there’s still time, girls. Get him while he’s hot.