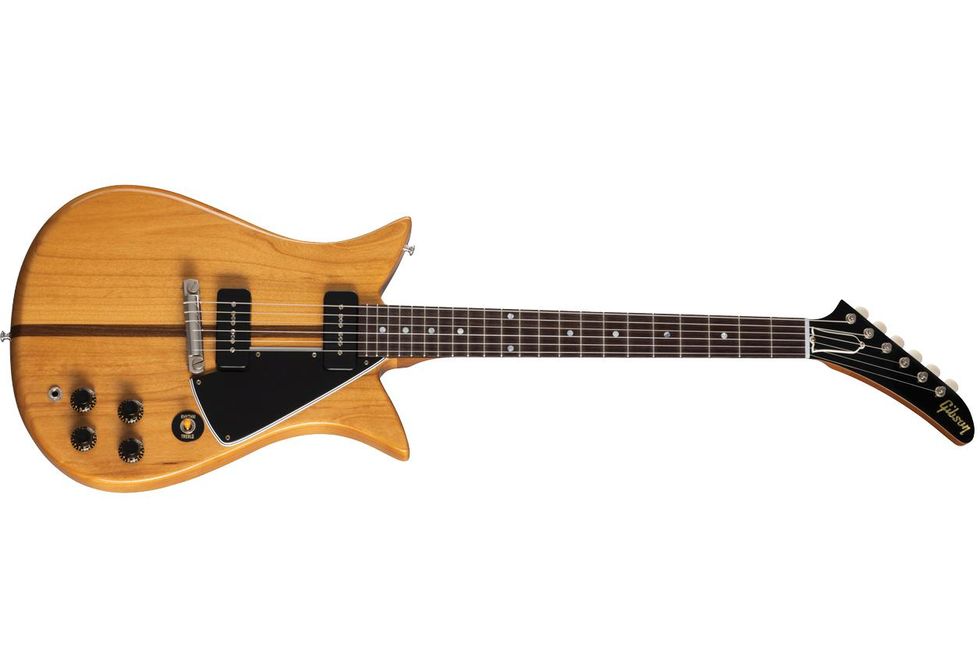 Gibson has had a lot of time to evolve as a guitar company. But that doesn’t make the breadth of personalities among their instruments any less astonishing. A Firebird, an ES-150, an ES-330, a Les Paul Standard, and an SG Jr. can each inspire very different paths for a given musical idea—or different ideas altogether. Each has its own musicality, attitude, and energy.

So, while it may not look the part at first, the Gibson Theodore, which existed only as a sketch by Ted McCarty from March 1957, is a perfect—or perfectly oddball—fit for the Gibson family. Slim, slender, scimitar-headstocked, and built around a pair of very lively P-90s, Theodore looks and feels like it longs to rock first and foremost. But it also has more feline and economical lines than many of its Gibson brethren. And like a goldtop or SG Special, the Theodore dwells just as happily in smoky jazz settings and mellow, meandering chord melody zones as rocking domains. This blend of attributes and capabilities make Theodore very versatile. It’s also an intriguing peek at the many design directions Ted McCarty was considering for Gibson while at a zenith of his creativity.

Striking as Theodore looks, it wasn’t the only guitar at the time to embrace a tulip-shaped double-cutaway design. And one has to wonder if Gibson didn’t reconsider Theodore as a production instrument upon seeing Rickenbacker’s similarly tulip-shaped Model 400 from the previous year. McCarty’s tulip shape is slimmer and more uniform than Rickenbacker’s. But while Theodore might estrange Gibson fans that prefer the company’s more overtly muscular shapes, there’s still much of the adventure and daring that went into the Explorer and Flying V at work here. And though Theodore didn’t fit the future-forward ethos of the Explorer and V, the way it spans 1930s Deco and the fancy organic shapes of Ibanez, Alembic, and Doug Irwin guitars from the ’70s make it a fascinating mash up of 20th century design modes.

There are practical upsides to the configuration as well. The body is alder, just as McCarty’s original sketch called for (it also has a walnut center strip that is implied in the sketch but not listed as a manufacturing specification). Alder construction makes Theodore lighter than a mahogany Melody Maker or SG. And though McCarty’s sketch specified that the body should be flat, it also includes a cross-section diagram of the lower bout that calls for a comfortable contour where guitar and ribs meet, suggesting that the Stratocaster’s ergonomic refinements had put guitar builders on notice. So, though the Theodore isn’t as form-fitting as a Stratocaster, it sits more comfortably against the human body than many slab-bodies guitars of the period.

Hooked up to two old black-panel Fenders, the bridge pickup made as perfect a rock ’n’ roll growl as I could imagine.

The Theodore’s neck is a 2-piece mahogany slab cut in what Gibson calls a chunky C-profile. It’s a fistful, but it’s awesome. And what it may sacrifice in slim-and-shreddy slinkiness it makes up for with inviting, lean-into-it heft that compels you to linger on single notes and extract every microtone, vibrato nuance, and bit of sustain. That approach is rewarded to no end by the excellent P-90s, which are bold, loud, and relatively noise free. Hooked up to two old black-panel Fenders, the bridge pickup made as perfect a rock ’n’ roll growl as I could imagine.

Rocking tones aside, players should not hesitate to use these P-90s at lower volume. Cutting the guitar volume back by just a few notches here and there yields some of the most soulful and dynamic sounds from the guitar. These tones excel for mellower lead passages, jangle rhythms, and jazzy chord ballads. Even at these slightly attenuated volumes the top end output remains very alive and energetic, and you can easily coax excited, just-dirty sounds from your amplifier if you add intensity to your pick attack.

The Theodore is a beautiful playing machine. The P-90s are delicious on the rocking and mellow sides of the spectrum, and they are sensitive—responding in cool ways to picking dynamics when wide open and at cleaner, lower volumes. The substantial neck is fantastic. And though the body profile will doubtless elicit strong opinions, I really warmed to the shape for its elegant economy of line. The short horn on the lap side may make it a less-than-ideal instrument for extended seated sessions as the short horn can slip off your lap in certain positions. But hanging on a strap it feels light, sturdy, responsive, and ready to do damage.

As for the cost: Well, five grand is a lot—a lot—for a guitar that, technically, is short on bells and whistles. On the other hand, the Theodore is immaculately built and sounds heavenly. Given its low production numbers and niche appeal, Theodore is almost certainly bound to be a very rare bird. Hold on to it for a while and you may be repaid with much more than hours of sweet tones and praise from fans of eccentric electrics. 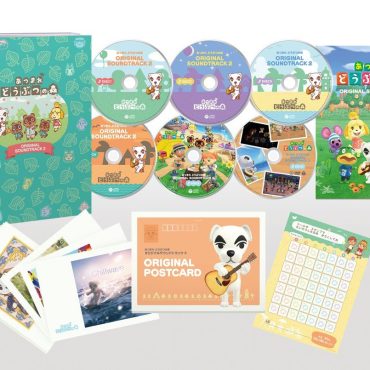 Animal Crossing: New Horizons To Get A Lovely Second Soundtrack This June

Image: NintendoThe Animal Crossing series has some of the most relaxing and downright lovely music in the entire video game industry. From soft, chill music to help you study to upbeat music that just puts you in the best mood, there's something for everyone. Last year, for the series' 20th anniversary, we got a beautiful 7-disc soundtrack to celebrate, and we're now getting a follow-up. On 22nd June, Nintendo will […]