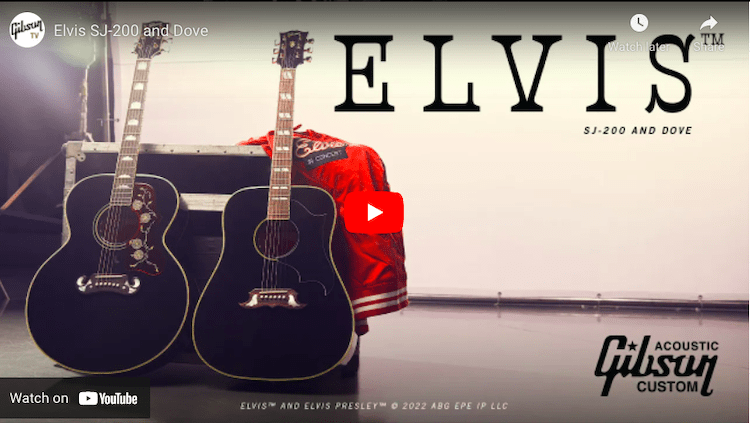 “The King of Rock ‘n’ Roll,” “Memphis Flash,” “The Hillbilly Cat,” there’s no short supply of nicknames for one of the most iconic cultural influences in all of music, Elvis Presley.

Gibson is proud to honor a legacy fit for a king and announce the addition of the Elvis Dove and Elvis SJ-200 to the Gibson Acoustic Custom Shop Artist Collection.

Elvis often used Gibson SJ-200 acoustic guitars, aka “The King of Flat Tops.” Gibson has now created ELVIS’s favorite SJ-200 in Ebony that is based on a guitar that was given to Elvis as a gift at a recording session at RCA Studio B in Nashville, TN in the mid-1960’s. He used the guitar for numerous live performances. Elvis gave it to his aide and close friend Marty Lacker at Graceland in 1976. The Elvis SJ-200 features a maple back, sides, and neck, as well as a Sitka spruce top.

The Gibson Elvis Dove is based on a customized 1969 Gibson Dove that was gifted to the King of Rock and Roll by his father, Vernon Presley. Elvis played it in concert regularly from 1971 until 1975, including during the 1973 satellite-televised Aloha from Hawaii concert. In 1975, Elvis gifted it in mid-performance to an astonished audience member at a concert in Asheville, North Carolina. The Gibson Elvis Dove features a solid Sitka spruce top, solid maple back and sides, and a mahogany neck capped with a rosewood fretboard.

We hope you can’t help falling in love with these two new Gibson Acoustics.