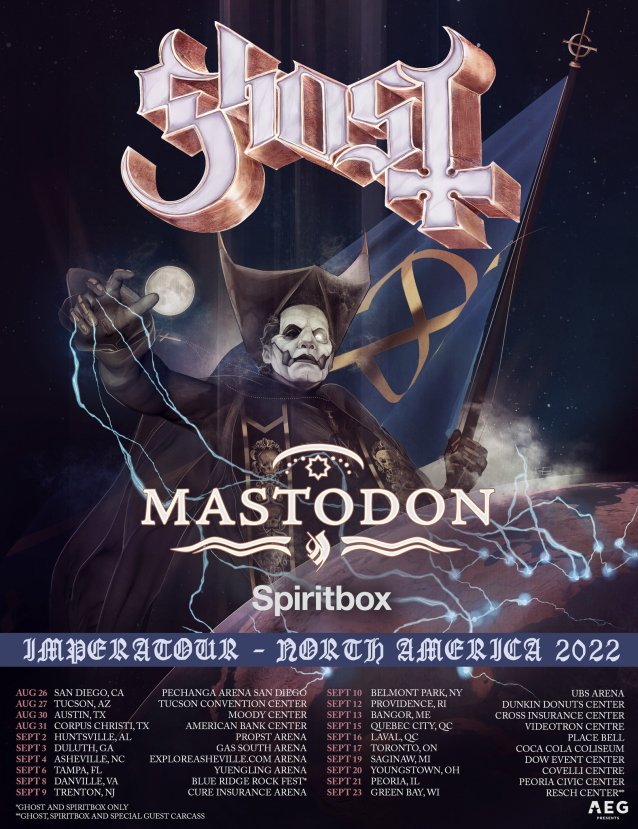 GHOST will once again bring the “euphoric spectacle” (Rolling Stone) of its live ritual to North America for the next leg of its globally dominating “Imperatour”. The North American “Imperatour” will see the Grammy Award-winning Swedish theatrical rock band headlining 19 arenas across the U.S. and Canada (plus an appearance at Virginia’s Blue Ridge Rock Fest),kicking off August 26 at San Diego’s Pechanga Arena and running through September 23 at the Resch Center in Green Bay. Support on all dates (with the exception of Green Bay which will feature support from CARCASS, and the Blue Ridge Rock Fest) will come from Grammy Award-winning band MASTODON, who have quietly evolved into one of the most influential, inimitable, and iconic rock bands of the modern era, and SPIRITBOX.

* GHOST and SPIRITBOX only
** GHOST, SPIRITBOX and special guest CARCASS

GHOST is continuing to tour in support of its fifth album, “Impera”, which sold 70,000 equivalent album units in the U.S. in its first week of release to land at position No. 2 on the Billboard 200 chart. It marked the third top 10 album — and fifth top 40-charting set — for the Swedish act.

“Impera” was released on March 11. The 12-song effort was produced by Klas Åhlund and mixed by Andy Wallace.

GHOST mastermind Tobias Forge worked on the follow-up to 2018’s “Prequelle” with Åhlund and Swedish co-writers Salem Al Fakir and Vincent Pontare, whose credits include Madonna and Lady Gaga.

In March 2020, at final show of GHOST‘s “Prequelle” tour in Mexico City, Mexico, the band officially introduced Papa Emeritus IV, the new character who is fronting the act for its “Impera” album phase.

Forge performed as a “new” Papa Emeritus on each of the band’s first three LPs, with each version of Papa replacing the one that came before it. Papa Emeritus III was retired in favor of Cardinal Copia before the release of “Prequelle”.

MASTODON was one of the “Best Metal Performance” nominees at the 64th annual Grammy Awards, which was held on April 3 at the MGM Grand Garden Arena in Las Vegas. The progressive metallers were nominated for their song “Pushing The Tides”, the first single from their latest album, “Hushed And Grim”, which came out in October.

The follow-up to 2017’s “Emperor Of Sand”, “Hushed And Grim”was recorded at West End Sound, which is located inside of Ember City, the rehearsal facility that members of MASTODON manage in Atlanta. Helming the effort was Grammy-winning producer/mixer/engineer David Bottrill, who has previously worked with MUSE, DREAM THEATER and TOOL, among many others.

The “Hushed And Grim” artwork was created by longtime MASTODON collaborator Paul Romano, who also designed the sleeves for “Crack The Skye”, “Blood Mountain”, “Leviathan” and more.

Early PEARL JAM drummer Dave Krusen rejoined his former bandmates on stage Monday night (May 16) at a concert in Fresno, California. Krusen was one of three drummers tapped to fill in for PEARL JAM's longtime drummer Matt Cameron, who has been sitting out shows on the band's current tour after positive for COVID-19.While introducing Krusen, PEARL JAM singer Eddie Vedder reflected on the band's 2017 induction into the Rock And Roll Hall Of Fame, saying: "The part that was […]