There will be a new guitar player in Evanescence the next time the band hits the stage. The band revealed that Jen Majura, who has been with the Amy Lee-led group since 2015, will no longer be performing with the band.

“It has been a very special chapter in the band with our dear friend Jen Majura, but we have decided it’s time to go our separate ways,” read a statement on the group’s social media. “We will always love her and support her, and can’t wait to see what she does next! We are so grateful for the good times and great music we made all around the world together.”

While the group did not reveal Majura’s replacement, they assured, “We are hard at work rehearsing for our upcoming tour and will have some exciting news about the new lineup coming in the next few days, so stay tuned.”

As for Majura, she posted on social media after the announcement was made, “I feel the need to address that none of this was my decision! I have no hard feelings against anybody and I wish Evanescence all the best. I am allowed to carry beautiful memories of these past years, I am grateful.”

At the time, Amy Lee stated, “After scouring the globe, I found Evanescence’s missing piece in South Germany. She plays like a supervillan, sings like an angel, and laughs like a great friend. We spent a few days together last week in New York sharing eerily familiar life stories, sushi, artistic inspiration, other people’s shoes, and SO many laughs! (Yeah, okay, and maybe there were a couple of stiff drinks mixed in there). We are all so excited to play together this fall and bring the show to a whole new level. CAN’T WAIT! I know you will show her all the love and respect a strong, talented woman deserves. I couldn’t be happier to welcome our new sister to the band.”

Majura later revealed that it was Testament’s Alex Skolnick that she had to thank for the connection after the pair had met at a festival.

“I’m a huge Alex Skolnick fan, so we ended up talking and keeping in touch. A couple of days later, I got this very mysterious email from him saying, ‘Jen! Some friends of mine are going to contact you and I can’t reveal too much but I think it’s something you should say yes to!’ I was wondering what the hell he was talking about,” recalled Majura, who later found out it was for Evanescence.

According to the guitarist, she ended up meeting with Lee but did not bring a guitar to the audition. She recalled, “I asked her if I needed to bring one and she said, ‘Nah, I know you can play, I’ve seen plenty of videos — let’s just hang out!’ And that’s what we did. … Hanging out, long walks and talks, going out for dinner or to a concert. Becoming friends and getting to know each other.”

Majura appeared on both 2017’s Synthesis album as well as their most recent release, 2021’s The Bitter Truth.

As for Evanescence’s immediate plans, the band will kick off their next tour on June 5 in Athens, Greece, so as stated in their announcement, news of the new guitarist should be coming soon. Evanescence will also play Rock Fest and InkCarceration in July, followed by a North American tour with Korn starting Aug. 16 in Denver. Stay up to date on all their touring and get ticketing info here. 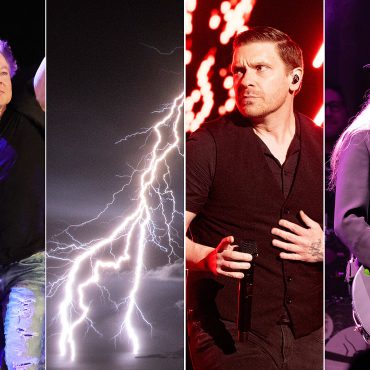 The weather continues to play a major role in the 2022 edition of Welcome to Rockville. A night after Korn, Breaking Benjamin and Skillet were unable to perform due to inclement weather in the area, weather impacted Saturday (May 21) festivities as well, forcing abbreviated sets from Jerry Cantrell and Shinedown, while headliners Guns N' Roses were unable to play at all.Once again, rain and lightning in the area led […]