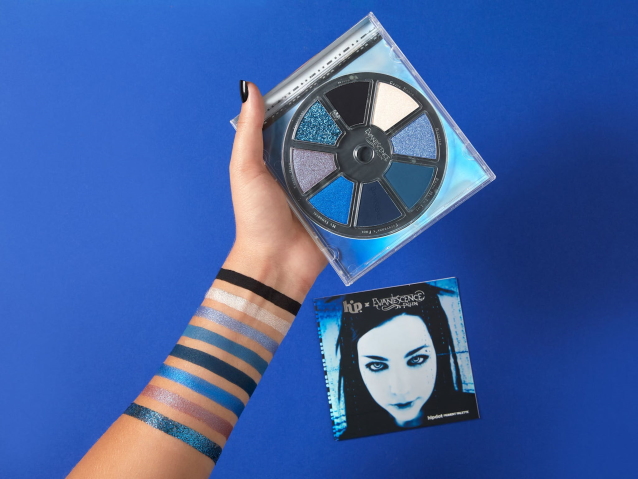 EVANESCENCE has teamed with the makeup company HipDot for a makeup palette celebrating the band’s debut album, “Fallen”. The set is packaged in a “Fallen” CD-sized case that contains a ring of eight different color “tracks” that are inspired by EVANESCENCE‘s multi-platinum LP.

Jeff Sellinger, co-founder and CEO of HipDot, said in a statement: “HipDot continues to blend beauty and pop-culture in unique and unexpected ways, and with this we are especially excited to bring to life this new beauty concept with a band as iconic as EVANESCENCE.

“Being able to bring together two very different industries with a common goal to shock, surprise, and please is something that we are very lucky to have the ability to do. We hope that with this collaboration we are able to continue to grow the momentum around blending make-up and pop-culture.”

HipDot previously collaborated with KORN on a makeup palette celebrating the 25th anniversary of the band’s “Follow The Leader” album, and with MY CHEMICAL ROMANCE on a three-piece eye makeup collection inspired by that group’s second album, “Three Cheers For Sweet Revenge”.

Last November, “Fallen”was certified diamond by the Recording Industry Association Of America (RIAA) for sales and streams of ten million units in the United States.

Led by the smash single “Bring Me To Life”, which also appeared on the soundtrack to the movie “Daredevil”, “Fallen” yielded three more singles with “Going Under”, “My Immortal” and “Everybody’s Fool”. EVANESCENCE also won Grammys in 2004 for “Best New Artist” and “Best Hard Rock Performance”.

Asked in a recent interview with Rock Sound if there are any plans for EVANESCENCE to commemorate “Fallen”‘s 20th anniversary in 2023, singer Amy Lee said: “I do have an idea. It’s gonna take a little bit of work. But I think it probably won’t be what everybody expects. I think everybody just is, ‘Oh, why don’t you do a show that’s, like, [playing] the album front to back?’ We’ve been playing so many shows, I would rather do something that, to me… I don’t know. I don’t wanna give it away, in case it doesn’t work out. Maybe I’ll do nothing. Expect nothing, and then if I do something, you’ll be really, really grateful. [Laughs]”

Amy also talked about the fact that “Bring Me To Life” experienced a resurgence last summer, 19 years after its original release. The song, which initially reached No. 5 on the U.S. Billboard Hot 100 and was EVANESCENCE‘s first U.K. No. 1 single, reached No. 1 on the U.S. iTunes chart in August.

“There is an element to a song like ‘Bring Me To Life’ that didn’t exist before, which is this nostalgia,” she explained. “The song has grown live. It’s something that we’ve added to. But part of how it’s grown is with its history and with what it means to everybody in the room. It’s not something new; it’s just something that you already have known for so long that has a place in your heart. It’s just able to be more than it would have been then. So I, in a lot of ways, love it more than I did.”

The success of “Fallen” led to turmoil within the group, as founding guitarist Ben Moody left in late 2003, leaving Lee as the only original member of the band.

Lee continued with new members, and EVANESCENCE issued “The Open Door” in 2006. While a hit, it did not equal the sales of “Fallen”. Lee told The Pulse Of Radio at the time that she wasn’t concerned about matching the previous album’s success. “I just haven’t ever looked at it that way,” she said. “‘Fallen’ is a great record, but I don’t think you can try to match the success of another body of work. I think that’s only gonna frustrate you. And if, honestly if what you really care about is record sales and money, there’s no way you’re gonna make a great piece of art, because then you’re just gonna get all confused and make something ingenuine.”

Last February, EVANESCENCE‘s music video for “Bring Me To Life” — which featured guest vocals from Paul McCoy of 12 STONES — surpassed one billion views on YouTube. The Philipp Stölzl-directed clip, which was uploaded to YouTube in December of 2009, was filmed in Romania in January 2003. It features Lee in a night gown and barefoot, in her room, inside a tall building in the city at night. The rest of the band is playing on a higher floor of the building.

In March 2021, Lee told Alternative Press that EVANESCENCE‘s original record label Wind Up threatened not to release “Fallen” if she and her bandmates didn’t add a male voice to lead single “Bring Me To Life” to make it more palatable for radio.

EVANESCENCE‘s latest album, “The Bitter Truth”, arrived in March 2021 via BMG. It was EVANESCENCE‘s first album of original music in ten years. 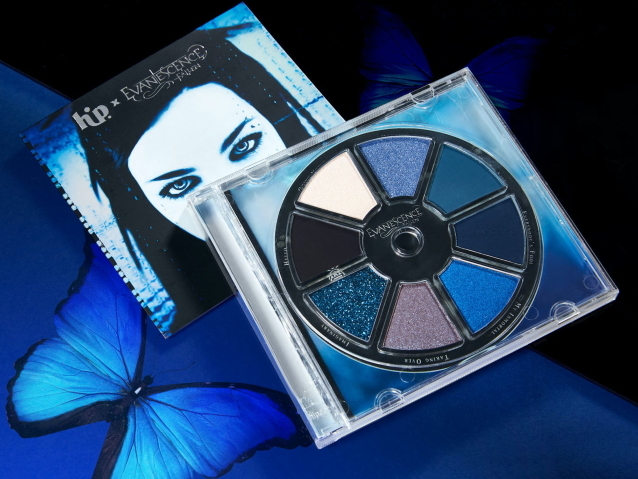