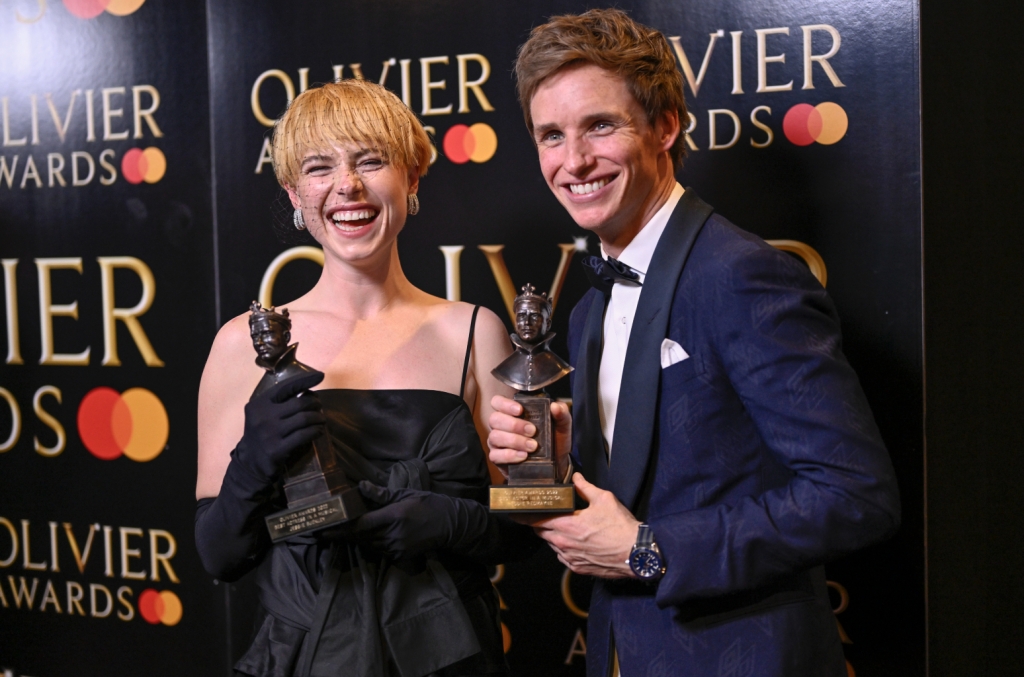 Eddie Redmayne and Jessie Buckley have won best actor and best actress in a musical at the 2022 Olivier Awards in London for their roles as the Emcee and Sally Bowles in the West End revival of Cabaret.

This freshest reinvention of the 1966 Kander & Ebb classic also won best musical revival, while Rebecca Frecknall scooped the Sir Peter Hall award for best director. Accepting his award on stage, Redmayne spoke of his “confidence crisis” during rehearsals, before acknowledging how the show had long fueled his passion, noting that “this is the dream, this is the one,” and the part he had played as a kid at school. His beguiling, contorted interpretation of the Emcee served as a perfect foil to Buckley’s mesmerizing, emotionally raw Sally in the immersive show that puts the audience at the heart of the Kit Kat Klub in 1929 Berlin.

Cabaret’s Liza Sadovy and Elliot Levey won best actress and best actor in a supporting role for playing Fräulein Schneider and Herr Schultz respectively. In accepting his trophy, Levey took aim at the British government’s visa system for Ukrainian refugees, which has come under much criticism in recent weeks. Earlier in the ceremony, the audience stood in support of the people of Ukraine, for a special performance of the Ukrainian national anthem introduced by actor Lesley Manville.

The ceremony, held at London’s Royal Albert Hall, featured musical acts on stage from Cabaret (featuring Amy Lennox who’s continued the role after Buckley’s run), Frozen, The Drifter’s Girl, Moulin Rouge! The Musical, Back to the Future: The Musical, Anything Goes, Get Up Stand Up! The Bob Marley Musical, and Spring Awakening — while there was also a performance from play The Life of Pi which features elaborate puppetry.

That theatrical adaptation of The Life of Pi took five awards, including best new play, best actor for Hiran Abeysekera and best supporting actor, which was won by the seven performers — Fred Davis, Daisy Franks, Romina Hytten, Tom Larkin, Habib Nasib Nader, Tom Stacy and Scarlet Wilderink — who play ‘Richard Parker’ the puppet tiger. Back to the Future: The Musical was named best new musical, and best actress went to Sheila Atim for Constellations. Meanwhile, best actress in a supporting role went to Liz Carr for The Normal Heart. Carr gave an impassioned speech calling for equal rights for disabled actors, saying on stage that she was the first actor with a disability to play the role of Dr. Emma Brookner (a U.S. physician who was among the first to recognize the 1980s AIDs epidemic), who herself used a wheelchair.

The Olivier Awards were hosted by British comedian and actor Jason Manford, whose opening monologue referenced the recent Will Smith-slapping-Chris Rock incident at the Academy Awards. “I’m a comedian,” said Manford shortly after walking out on stage, “and I think all your hair looks lovely and I will very much be keeping your wives names out of my mouth this evening. This is an evening of backslapping, not face slapping.”

Guest presenters on the night included Keala Settle, Hannah Waddingham, Kit Harrington, Tom Felton, Fiona Shaw, Anne-Marie Duff, Noma Dumezweni and Monica Dolan. Stephen Sondheim was remembered in a performance that closed the ceremony and paid tribute to those who’ve kept theaters running during a continued testing time of the Covid-19 pandemic; Maria Friedman welcomed the swings and understudies from shows that performed on the night, along with performing arts students, for a rendition of Sondheim’s Our Time from Merrily We Roll Along.

Best revival went to Constellations, which featured four casts in rotation, among them: Chris O’Dowd, Peter Capaldi and It’s A Sin’s Omari Douglas. Pride And Prejudice* (*Sort Of), won the Noël Coward/Geoffrey Johnson award for best entertainment or comedy play, Revisor was named best new dance production, and Arielle Smith won outstanding achievement in dance for her choreography of Jolly Folly in Reunion by English National Ballet at Sadler’s Wells. Wolf Witch Giant Fairy was named best family show, and best set design went to Tim Hatley for design and Nick Barnes and Finn Caldwell for puppets for Life of Pi, while Catherine Zuber followed her Tony Award win to also collect the Olivier for best costume design for Moulin Rouge! The Musical.

The prize for outstanding achievement in Affiliate Theatre went to Old Bridge at Bush Theatre, Jenůfa won the best new opera production, and the outstanding achievement in opera was awarded to Peter Whelan and the Irish Baroque Orchestra for Bajazet. Tim Lutkin and Andrzej Goulding took the prize for best lighting design for Life of Pi, and Nick Lidster collected best sound design for Cabaret. Best original score or new orchestrations went to orchestrator Simon Hale for Get Up, Stand Up! The Bob Marley Musical, and Kathleen Marshall won best theatre choreographer for Anything Goes.

This article originally appeared on The Hollywood Reporter. 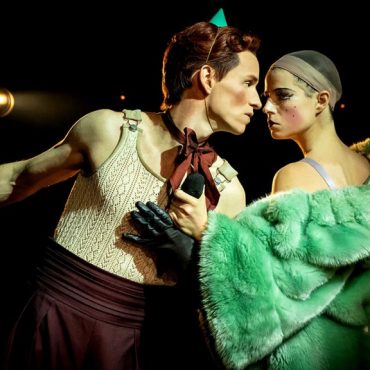 Eddie Redmayne and Jessie Buckley have won best actor and best actress in a musical at the 2022 Olivier Awards in London for their roles as the Emcee and Sally Bowles in the West End revival of Cabaret. This freshest reinvention of the 1966 Kander & Ebb classic also won best musical revival, while Rebecca Frecknall scooped the Sir Peter Hall award for best director. Accepting his award onstage, Redmayne […]