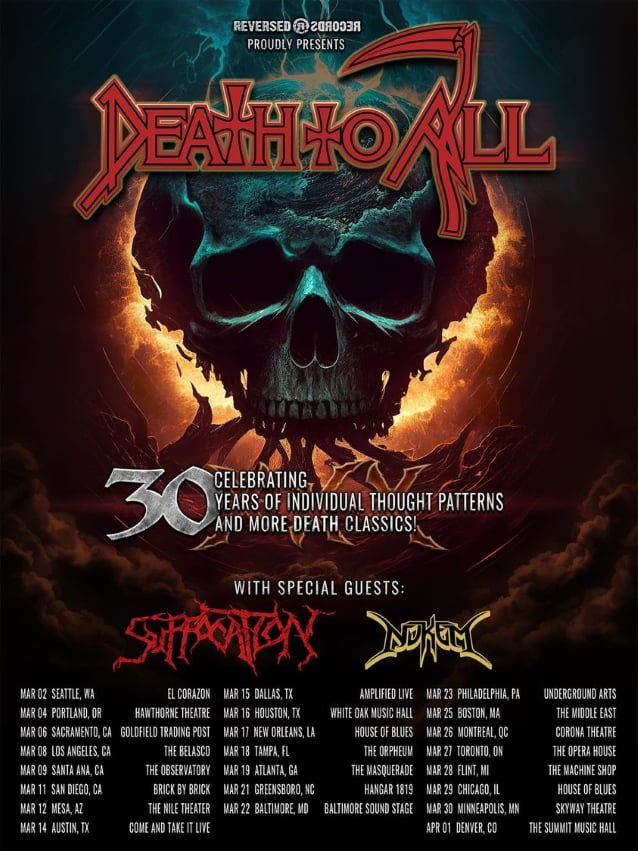 DEATH TO ALL (DTA) — which features former members of DEATH celebrating the life and music of Chuck Schuldiner — will embark on a North American tour in March. The trek will kick off on March 2 in Seattle, Washington and will conclude on April 1 in Denver, Colorado. Support on the tour will come from SUFFOCATION and NUKEM.

The current lineup of DEATH TO ALL includes Gene Hoglan (also of TESTAMENT, DARK ANGEL, DETHKLOK),Steve DiGiorgio (TESTAMENT, CONTROL DENIED, SADUS) on bass and Bobby Koelble on guitar. Max Phelps (CYNIC),who has been touring with DEATH TO ALL, is once again handling the vocal and second-guitar duties.

In a 2014 interview with Metal Rules, DiGiorgio was asked what DEATH TO ALL means to him. He responded: “Our formulated answer is that it is a tribute memorializing the memory of Chuck. To me, it means getting back with buddies. And you’ve seen their lineup change a little bit here, we had Paul [Masvidal] and Sean [Reinert] from CYNIC. We had Shannon Hamm in for a while. And now Gene and Bobby. I’ve jammed with all these guys over the years. They’re pretty much some of the best musicians in the world. At least in my opinion.”

He continued: “We did those albums back in the day, and when our cycle was over, and when whoever lasted however long, we went our own ways. Now we’re back together again and it’s cool, from my point of view, to do music with some of the best, amazing musicians/guys in the world. It’s awesome. And we have a lot of fun every night, man, because we all realize that not only did we make a statement 20-something years ago, but here we are 20-something years later in our mid-40s playing that stuff as we did as young men. It’s kind of, like, yay us. Because we are only just a few years off of 50 and we’re playing this music we did just turning the corner into 20 and we’re doing it pretty good. And that’s not a brag. The reason is we push each other. Somebody falls a little bit behind and this guy’s right behind him. You don’t want to let your guard down, because everybody’s really good at what they do. And that’s what it means to me, man. It means to carry on what we did back then with no idea where we’d be in the future, and here we are doing it with conviction.”

Schuldiner died on December 13, 2001 after a battle with pontine glioma, a rare type of brain tumor.

Relapse released the first-ever fully authorized DEATH tab book, featuring 21 classic songs tabbed out for guitar from the band’s entire discography. The book, which includes traditional notation as well as tablature, also comes with a digital download of all tracks.

In a 2011 interview with Bass Musician magazine, DiGiorgio stated about working with Schuldiner: “Sometimes people make good music together, and sometimes they vibe like yin and fucking yang. Chuck is credited with a lot of things in the music world (metal world, of course),but one thing a lot of people don’t know much about is how aware he was. What I mean is that he was a good listener. If I thought of a wacky bassline to something he was writing, before I could even try to explain why it came to me, he was already ahead of it and looking for something on the next part. He had a good sense of when to hold me back and when to push me. It was great to have someone, especially the ‘main man’ of the band not only appreciate what I contributed but also help me find my inner demon to conjure even sicker and more abstract things to play. There really was some math going on in that roiling storm sometimes.”