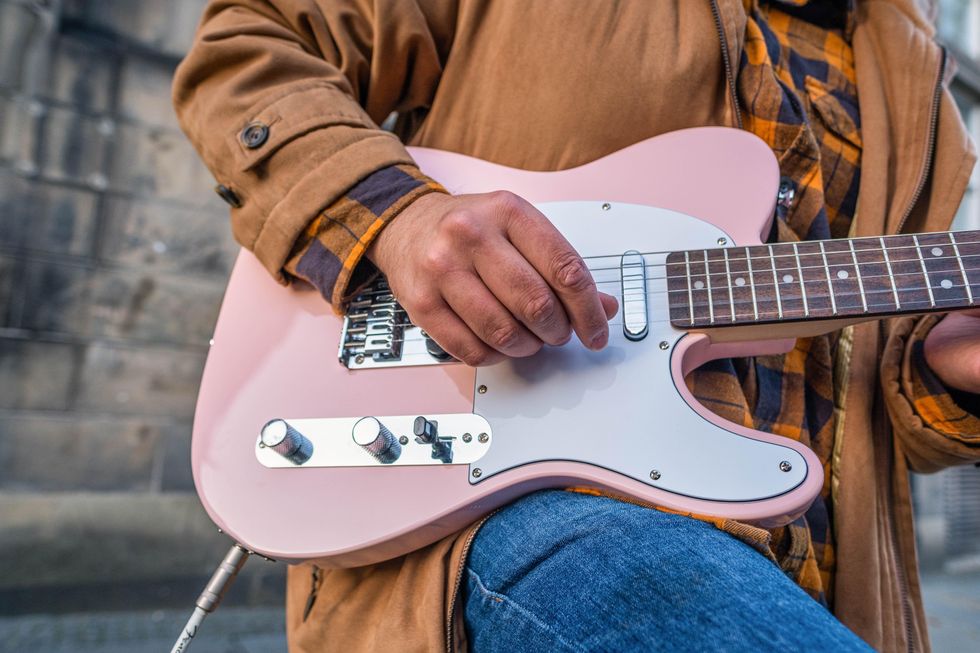 Let’s face it folks, pedal-steel is a pillar of the country music sound. It’s one of my favorite instruments—not just in country, but all music genres. The ability to play complex chords, the range of the instrument, the way you can manipulate bends (with knee levers and pedals), and the lyrical quality and tone add so much to the country sound. The textures and chord voicings can really beef up a rhythmic part, but also can make you cry in your beer with a single-note line that includes so much articulation and manipulation it can make your head spin. We are going to mainly focus on a one element that really makes the pedal-steel guitar special and very difficult to emulate on guitar: bending notes.

Most guitar players typically will bend with their ring finger. In some of these examples you will be bending with your index and middle as well—in a very foreign fashion. Think of it like lifting weights and adding more independence to each individual finger. It’s not easy and will take time if you’re not used to this technique. Keep in mind, you do not need any bender built into your guitar. Your fingers will do all the work. I also didn’t include any licks using a volume pedal although you could incorporate one if you desire

Now let’s break down these licks!

The first two examples will give you a good idea of how to start thinking like a pedal-steel player. Ex. 1 is a simple A major scale (A–B–C#–D–E–F#–G#) but certain notes are bent instead of fretted. Note the half-step bend on the 3 (bend that with your middle finger) and the full-step bend on the 7th fret of the 2nd string, as well as the half-step bend to get back to the A. Mastering playing in tune is vital to having that pedal-steel effect on guitar. I would also let the first note played in this example ring until you’ve reached the 2nd string. This will give the line a cascading effect. Listen to the audio example and try to match the phrasing and articulation of the line. For all examples a healthy dose of reverb helps notes “sing” more.

Ex. 2 is a descending line that starts with a pre-bend. You will see this technique a lot. It’s a key component in getting the sound. Ring finger does all the bends on this lick.

While there is only one bend in this example, you’ll need to hold the bend on the 12th fret of the 3rd string while moving your pinky from the 13th fret down to the 12th fret on the 1st string. This is a pretty standard type of steel lick that I always use in my playing. It works great over a C chord.

The tricky part about Ex. 4 is connecting the two separate bends. You do this by releasing the bend at the 11th fret on the 3rd string and sliding down to the 9th fret then bending up again. It should be seamless and immediate to get the phrasing correct. All bends are done with your ring finger. This is just a great lick to play over an E chord.

In Ex. 5 we add an element of chicken picking with a “cluck” or dead note before the first three bends. We work down the neck with a series of pre-bent double-stops. It’s a standard but effective pedal-steel technique, but it’s tricky. The first bend in measure 1 bends the 1st string up a half-step while the 2nd string goes up a whole-step. It sounds complicated, but because of the differing string gauges, it actually works pretty naturally. Just go for it. The next double-stop bend requires both the 3rd and 2nd strings to go up a whole-step. Attitude is more important than intonation, so do it with no fear. For the final Gsus2 to G bend, barre your pinky on the top two strings and use your middle finger to bend up a whole-step.

Ex. 6 works well if you’d like pedal-steel bends over minor chords. This lick uses some open strings, which creates a nice tension that emphasizes the 9 (B) against the Am chord. As you work your way down the neck, you’ll need to bend with the middle finger on the 7th fret of the 3rd string. More notes in this lick but well worth the work.

Ex. 7 is another pre-bend lick that uses unison notes, which is common for steel players. In this turnaround lick, use your in index to bend down on the 2nd fret of the 3rd string. You could think of this as an end of a tune lick so using rubato or a free feel is cool.

Here (Ex. 8) we move into a repetitive lick with a triple-stop slide at the end barred with the index finger. Notice we start in a simple D minor shape. Adding a bend gives it lots of texture and once bent, the chord functions nicely as a G7. The middle finger is busy on this lick, bending up a whole-step on the 14th fret of the 3rd string.

Hopefully you’ve enjoyed some of these licks. They aren’t easy but they add some cool textures, tension, and resolution to your guitar lines. Make sure to really try to nail the part as close to the recording as you can. It’s taken me years of practice and thousands of gigs to really have some of these ideas and licks under my fingers. This is just a small microcosm of the possibilities of these kinds of licks. Let them inspire you to try to write your own or fit them into a tune you already play.

I like incorporating pedal-steel bends into my playing because it makes me think about different musical elements. Experiment with half- and whole-step bends, as well as pre-bends, and learn to phrase more like a pedal-steel player. It’s fun and challenging and will add tons of color and options when creating musical lines.