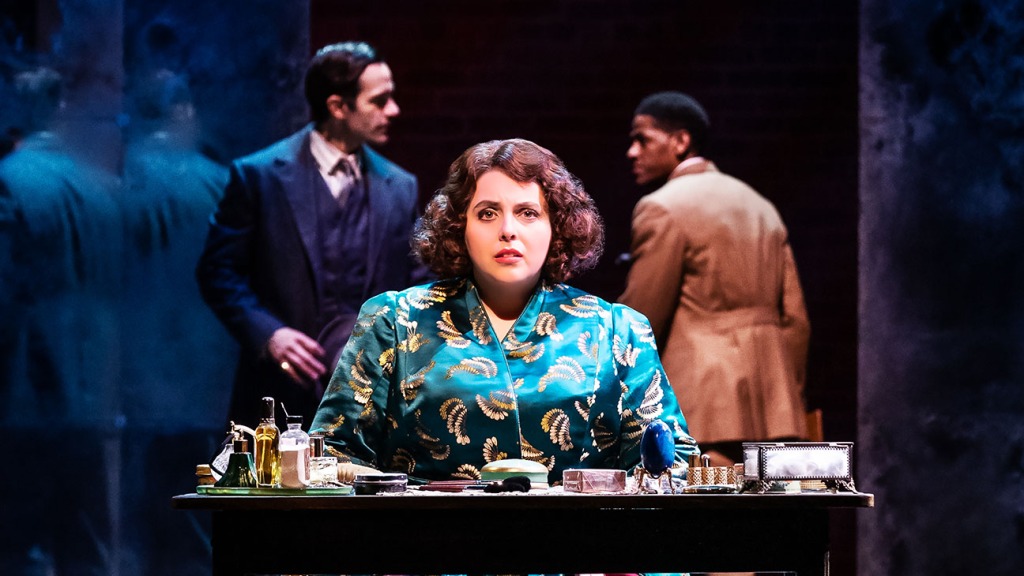 Planned Broadway revivals of Funny Girl have been derailed twice in recent times — once with Lauren Ambrose in the title role when backers pulled out, concerned about her bankability and a number of expensive classic musical remounts that had underperformed; again when Ryan Murphy halted early talks to produce the show with Lea Michele after she unofficially auditioned for it on Glee. The 1964 Fanny Brice bio-musical is finally back almost 60 years after it first premiered, with a perky and appealing Beanie Feldstein in the lead. Still, there’s no escaping the indelible imprint of original star Barbra Streisand.

With a tuneful if uneven score by Jule Styne, lyrics by Bob Merrill and an unsatisfying book by Isobel Lennart, the show had a troubled history en route to Broadway; luminaries like Stephen Sondheim, David Merrick, Bob Fosse and Jerome Robbins all stepped away from the production at various points in its development. The latter eventually returned and took a supervisory credit, causing chagrined director Garson Kanin to exit.

That bumpy road was forgotten, however, when the show opened to triumphant reviews and a three-year run, crowning a sensational new Broadway star in Streisand. Her irrefutable ownership of the role was cemented even more four years later in William Wyler’s top-notch film version, which further tailored the show as a star vehicle by excising many of the weaker numbers and stitching in additional Streisand showstoppers. That legacy is a lot to live up to, for any performer.

Feldstein has emerged as an irresistible screen presence in films like Booksmart and Lady Bird, and she was a delight in the supporting role of Minnie Fay in 2017’s blockbuster Broadway revival of Hello, Dolly! with Bette Midler. But she has a lovely, light singing voice in a part that often calls for big-belt power, and she reads girlish, never quite selling the consuming hunger that propels Fanny to stardom in the early-1920s Ziegfeld Follies. Feldstein leans hard on the comedy with enormous charm, but she struggles to locate the raw vulnerability of Fanny in later years, as her marriage to inveterate gambler Nick Arnstein (Ramin Karimloo) falls apart.

The revival’s shortcomings by no means rest entirely on Feldstein’s shoulders. Neither director Michael Mayer nor script doctor Harvey Fierstein has solved the problems of the creaky book, which can’t build Fanny’s longing for offstage romantic fulfillment to match her professional success — and her eventual showbiz survivor resilience — into a robust through line. The show feels patchy and episodic and it needs a knockout, roof-raising lead to paper over the cracks.

There’s also the issue of its dated sexual politics, with Nick’s emasculation caused by his string of failed ventures while Fanny skips from success to success, out-earning her husband and feeding his humiliation. Karimloo is a gifted performer with rich tenor vocals; he cuts a dashing figure even if he’s not a natural dancer. But too much of the central relationship’s decline is marked by subpar songs that feel like needless filler. And at close to three hours, this sluggish production needs no padding, even if it improves on the more skeletal staging that Mayer and Fierstein test-drove in London, with Sheridan Smith receiving raves in the lead.

Production designer David Zinn and costumer Susan Hilferty have fun with the Ziegfeld interludes, though Mayer borrows from another Follies — Sondheim and James Goldman’s far more durable 1971 musical — by having the ghosts of Fanny’s past stalk the stage at various points. But production numbers like “His Love Makes Me Beautiful,” a ridiculous American bridal pageant of which Fanny makes a comic mockery, showcase Feldstein at her best.

Jane Lynch is amusing as Fanny’s seen-it-all Brooklyn saloon-keeper mother, towering over Feldstein and kibitzing with her gossipy Henry Street poker-game pals, Mrs. Strakosh (Toni DiBuono) and Mrs. Meeker (Debra Cardona). There’s some subtle messaging about body positivity in Mrs. Brice’s support of her daughter when her friends insist that only conventional beauties can make it on the stage in “If a Girl Isn’t Pretty.” Feldstein is pretty, but she plays up the odd-duck shtick to pleasing effect that works for the character and her physical comedy skills are undeniable.

Mayer and Fierstein compound the second-act weaknesses by shifting “Who Taught Her Everything She Knows?” from its original placement much earlier in the show to a point where it’s just one more distraction from the floundering Fanny-Nick relationship. The song is performed by Mrs. Brice and Fanny’s longtime choreographer and friend, Eddie Ryan (Jared Grimes); the latter is one of the New York stage’s premier tap dancers, but his vigorous numbers feel like shoehorned extras, inorganic.

Basically, the hurdle with Funny Girl is that it has just two great songs, the popular ballad “People” — the lyrics of which make no sense; why are “people who need people the luckiest people?” — and the rousing “Don’t Rain on My Parade.” OK, maybe three songs with “The Music That Makes Me Dance,” when Streisand renders it a heartbreaking acknowledgment of Fanny’s undying devotion to Nick. The movie, which holds up remarkably well, added a title song for Fanny, here mystifyingly given to Nick; and it closed on an emotional high note with Streisand pouring her soul into the 1920s standard, “My Man,” which is not used here.

Feldstein gives a spirited, highly enjoyable performance, and her freshness drew squeals of appreciation from what seemed like a large contingent of very vocal young female fans on a recent press night. But she never quite makes the material soar, and this is a rickety vehicle that needs a supernova to put gas in its tank.