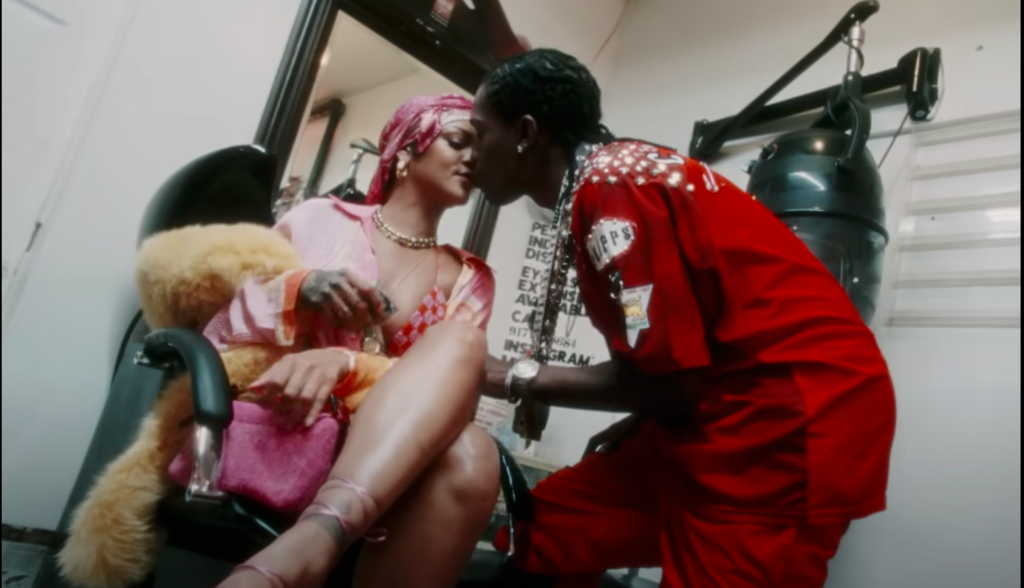 A$AP Rocky has released a new music video “D.M.B.” (short for “Dat’s My Bi**h”) starring Rihanna, his real-life leading lady. In the video filmed before the Music Of The Sun singer’s stylish pregnancy, the couple portrays a self-described “ghetto love tale” based in New York City with a fairytale ending. Together they eat, drink, and share public displays of affection.

The relationship survives a prison sentence served by Rocky in the video where Rih visits him and excitedly welcomes him home upon release. In the end, the pair are married, after the Testing rapper grins, showing off golden grills asking the bad gal, “Marry Me?” Her own dental diamonds spelled out “I do.”

Although the narrative explored in the “D.M.B.” video is fictional, the musicians are currently romantic partners and expecting their first child together. The lyrics of the song detail A$AP Rocky’s commitment to Rihanna. The song is the Harlem rapper’s first solo release since “Rich N— Problems” from the Judas and the Messiah soundtrack issued in 2021.

“I don’t beat my bi**h, I need my bi**h/Shе clean my crib, she feed my friends,” raps Rocky on the devout rap song.

The video was written, directed, and executive produced by A$AP Rocky himself for AWGE and according to a press release is described as “depicting true ride-or-die characters in a devoted relationship despite their circumstances.” “D.M.B.” was produced by Lord Flacko, Skepta, Shlohmo, Hector Delgado & Kelvin Krash with additional production by D33J.